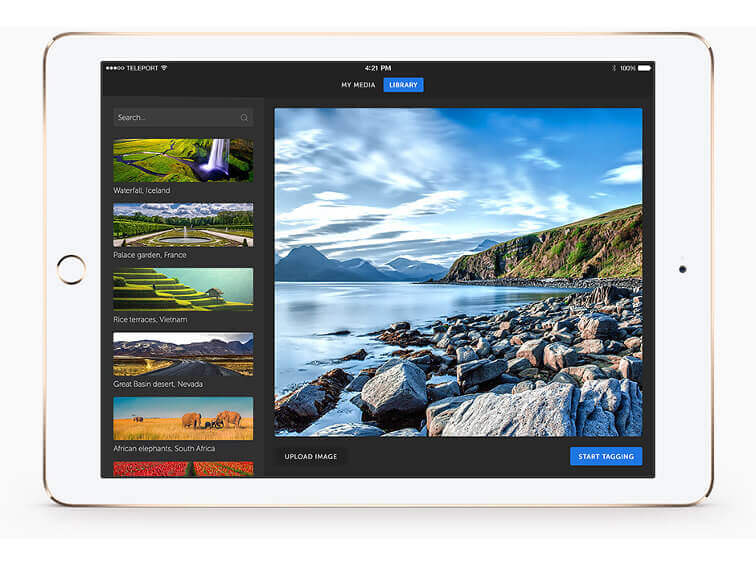 San Francisco, CA (March 30, 2017) – ThingLink, the leading platform for creating interactive videos, virtual-reality and image content, announced today its new 360° photo editor for tablets. Targeted towards educators and students, the Teleport 360 Editor is the first app of its kind that allows users as young as first graders to easily create dynamic, information-rich 360° experiences for mobile VR in minutes.

The Teleport 360 Editor is available today for premium ThingLink users via iTunes and coming soon to Google Play.

“There is a growing interest in 360° publishing and immersive learning at schools. As we make content creation possible on mobile devices, we are going to see various types of experts, educators and students create thousands of new virtual lessons and experiences per week,” says founder and CEO Ulla Engestrom. “This adds up to be a global, user-generated 360° learning environment, which every teacher and student wants to be part of.”

Teleport 360 Editor app can be used to create interactive 360° lessons, audio tours, virtual spaces, or photo reportages in minutes. This streamlines the process of creating interactive 360° images by letting students annotate images created with Google Street View on their tablets or by accessing ThingLinks professional library of preloaded 360° images. Teachers and students can instantly start adding text, images, audio or video annotations to their story.

Since the launch of ThingLink’s desktop 360° and virtual reality editor in 2016, over 75,000 educators and students ranging from elementary school to university, have access to the 360° desktop editor. Today, 80% of elementary and middle school children in the US use tablets, and that number is going to continue to rise. Currently, most schools and universities can not afford expensive VR headsets, but with Teleport 360 Editor they can create and explore interactive 360° lessons without VR headsets on tablets.

“Immersive and interactive field trips have been found to support student’s learning, but when the students themselves become producers, designers, and editors, this simultaneously develops critical thinking and presentation skills as well as practical tool use,” says Founder and CEO Ulla Engestrom. “We were inspired by the new Finnish national curriculum that emphasizes mobile multimedia creation as one of the essential ways to develop new literacy skills.”

Makes 360 photos more dynamic by easily adding text, audio or video annotations to them and connects multiple photos to a virtual tour.

Includes hundreds of curriculum-aligned, professional 360 photographs that teachers and students can use to create virtual tours. Topics include US and World Capital Cities, historic landmarks, lakes, rivers, ecosystems, plants and various weather patterns.

Users can directly access the photo and video gallery on their tablets,  making it faster to add closeup images to a story.

The Teleport 360 Editor is available for tablets via the iTunes and coming soon to Google Play. For more information about Teleport 360 Editor or to sign-up for a premium subscription, please visit http://demo.thinglink.com/vr-editor or [email protected]

ThingLink adds a custom information overlay to images, videos, and virtual reality. Over 4 million online publishers in media, education, and marketing use ThingLink to transform their visual assets into engaging discovery and learning experiences.