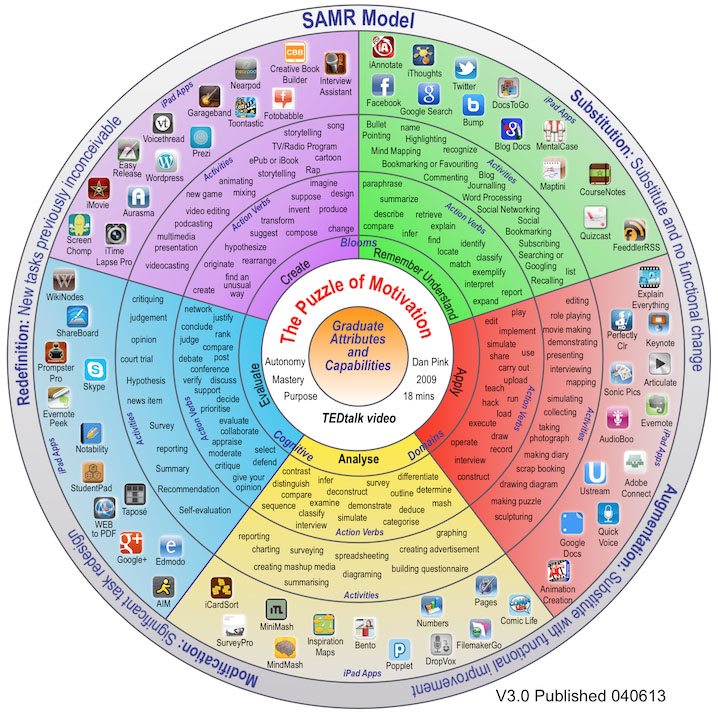 The Big Picture Of Education Technology: The Padagogy Wheel

Teaching is a matter of design.

That’s not new, but in an era of change and possibility, it’s more apparent now than ever.

The SAMR model (which acts as a kind of continuum to reflect the possibilities of technology in learning) is a helpful tool to make sense of this idea, a visual reminder that ideally technology moves beyond Substitution phase (the “S”) towards a Redefinition (the “R”) of what was previously impossible without it.

This, among other shifts, will help fully realize the potential of learning technology. When you take a Bloom’s wheel, and smash it together with 60+ educational apps that allows learners to brainstorm, collaborate, research, create, curate, and create new knowledge–well, you have the image below, courtesy of Allan Carrington of Designing Outcomes.

This is what has come to be known as the “Padagogy Wheel,” a title that reflects this convergence. The full pdf version–which can be downloaded here–includes links to download the representative apps, but the big idea here is really the big picture thinking of how technology works–or can work–in the learning process.

The visual places the idea of motivation and capabilities at the center, which gets at one of its more compelling characteristics as a model–the meshing of technology, thinking, and student motivation. Many of the failures in #edtech are failures in #edtech integration, and frameworks like the Padagogy wheel attempt to clarify the relationship between “big picture” elements. Seeing the pieces–tablets, apps, learning goals, cognitive actions, etc.–and how they work together is everything. Without that vision, any bit of #edtech is limp and lifeless.

Google Drive in and of itself is neither good nor bad.

Google Drive in service of a task previously unattainable without it, attended to by an engaged student, where said student is using a spreadsheet to classify mammal behavior with a student in another school as part of a presentation to a local wildlife preserve as the culminating task in a project-based learning unit on animal ecology?

That’s something else altogether.

The Big Picture Of Education Technology: The Padagogy Wheel