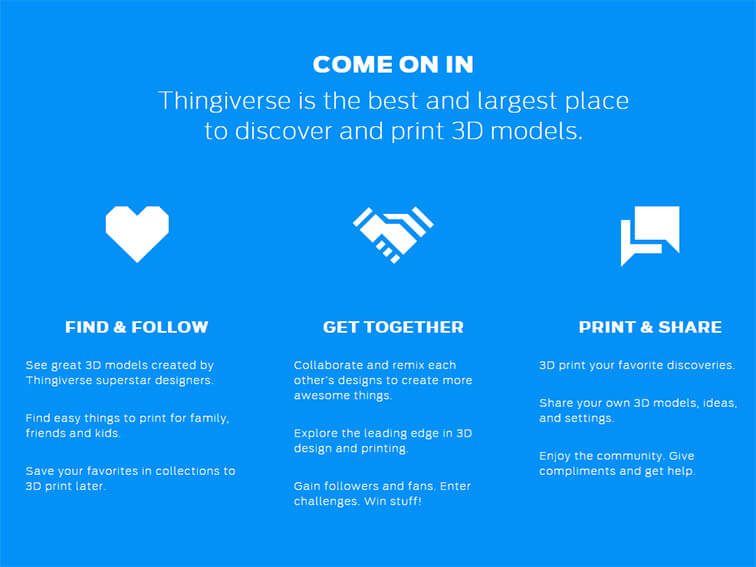 BROOKLYN, N.Y., October 29, 2015 — MakerBot Thingiverse, the world’s largest 3D design community, reached a landmark one million uploads and 200 million downloads on its platform. What began in 2008 as a website exclusively for the burgeoning maker community has grown into a robust gateway to 3D printing and 3D design for hundreds of thousands of people worldwide including educators, professional engineers and designers.

“We believe that the impact Thingiverse has had on 3D printing and 3D design in its seven years is tremendous,” said Nadav Goshen, president of MakerBot. “Thingiverse has helped popularize 3D printing by creating a vibrant community and making it easy to discover, make and share 3D designs.  It has become the go-to place on the Internet for anyone interested in 3D design and 3D printing. We are excited to see what people come up with next.”

MakerBot founded Thingiverse in a Brooklyn-based hacker space because they wanted a place on the Internet where they could share physical objects. At the time, such a site didn’t exist. When Thingiverse was created, most of its users were small-scale manufacturers, engineers, or people who owned a 3D printer. During its first six months, the site averaged between 30 and 40 uploads per week. Today, Thingiverse boasts more than 2 million active monthly users and 1.7 million downloads per month. It is also the home to a number of competitions like the Assistive Technology and Fall STEAM Challenges, which invite community members to collaborate and create across the globe.

“When Thingiverse launched, 3D printing was very primitive, but you can see how the technology has advanced by comparing old uploads to new uploads,” said Tony Buser, a long time user of Thingiverse and current director of web, mobile, and desktop at MakerBot. “Now people are prototyping engines, prosthetics, and many other things that will eventually be created and used in the physical world. We’re also seeing students and teachers take advantage of Thingiverse as 3D printing and design become integral to curricula across the country.”

MakerBot Thingiverse has evolved from a community geared around simply sharing 3D designs on the web into a broad community of collaborators. One of many milestones in the site’s history was the 2013 introduction of Thingiverse Customizer, which allows Thingiverse users to easily customize existing 3D designs. Customizer not only made 3D design more accessible for those who aren’t familiar with professional 3D design software but also opened the door for more collaboration among its users.

One example of the collaborations on Thingiverse is the creation of the Robohand. Through Thingiverse, a woodworker from Johannesburg, South Africa, and a theatrical prop designer from Seattle, Washington, were able to work together across 10,000 miles to create a prosthetic hand that has been used to better the lives of hundreds of people across the globe. Now, a larger community of doctors, hobbyists, educators and engineers on Thingiverse continue to improve upon the original Robohand design, with the goal of enabling low cost prosthetics for people who otherwise wouldn’t get them.

Thingiverse also offers a glimpse into the use of 3D printing today. Popular Thingiverse categories include Ikea hacks, fashion items, toys and games, and art. Some of the most popular uploads of all time are the Low Poly Mask, the Amazing Gyroscopic Cube Gears! and practical items like the fully assembled 3D printable wrench and an earbud holder. To celebrate one million uploads, MakerBot is giving away 10 large popular prints from Thingiverse. (To enter the giveaway, fill out this form.)

Educators across the country are using Thingiverse to teach their students problem solving and collaboration to encourage them to apply ideas and designs to real-world problems. According to MakerBot’s market research, 79 percent of teachers who use MakerBot 3D printers use Thingiverse in the classroom[1].  MakerBot also offers dedicated resources for educators on Thingiverse, such as design challenges and Jumpstart, which serves as an introduction to a number of free design programs that can help people bring their ideas to the physical world.

As the world’s largest 3D printing community, Thingiverse encourages everyone to create and remix 3D things, no matter their technical expertise or previous experience. In the spirit of maintaining an open platform, all designs are encouraged to use a Creative Commons license that lets others use and remix designs.