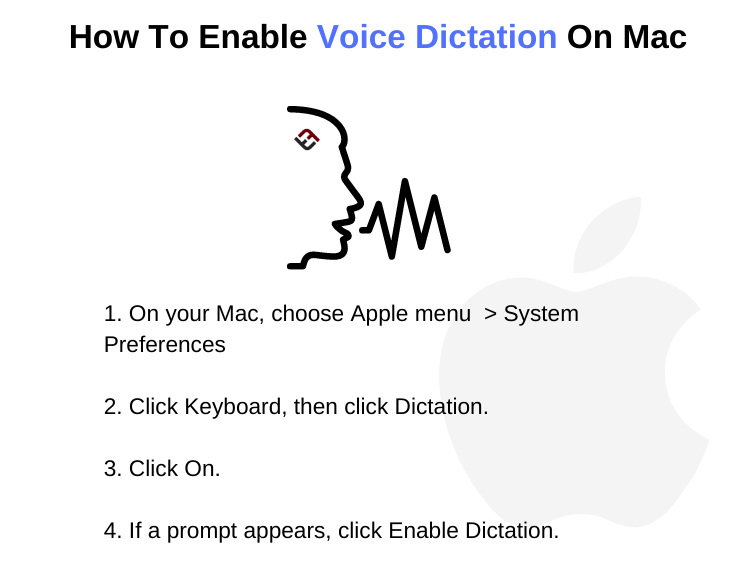 How To Enable Voice Dictation On Mac (For Free)

What Is Voice Dictation?

Voice dictation is simply voice-to-text–that is, the ability to use your voice to ‘type,’ letting the software turn your voice into words.

As this technology improves, from voice search to voice dictation and voice control, its applications become more numerous and powerful. Not all voice dictation is created equal, however.

Voice dictation software like that which has been available from Dragon for years (this, for example–affiliate link) depend on voice recognition developed by, among other tools, IBM’s Watson (named after IBM’s founder Thomas J Watson). The better examples allow more granular control of the text-creating-process (as opposed to the voice-to-text option available on most smartphones and tablets).

(The history of the development of this technology is fascinating. See Ray Kurzweil’s How To Create A Mind, for starters).

Today, we’re going to stick to simply turning it on.

How To Enable Voice Dictation On Mac

While advanced voice control and dictation software exists for users who need more control of the process, there is a built-in voice keyboard dictation feature on Mac that you can use for free.

According to Apple, with this keyboard dictation, you can “dictate text anywhere you can type it. Turn it on in the Dictation pane of Keyboard preferences—your dictated utterances are sent to Apple to process your requests. A feedback window gauges your speaking volume and provides basic dictation controls.”

See also How To Delete Icons From A Mac Desktop

Note: When Voice Control is on, you can’t use keyboard dictation.

How To Add Different Languages For Voice Dictation On Mac