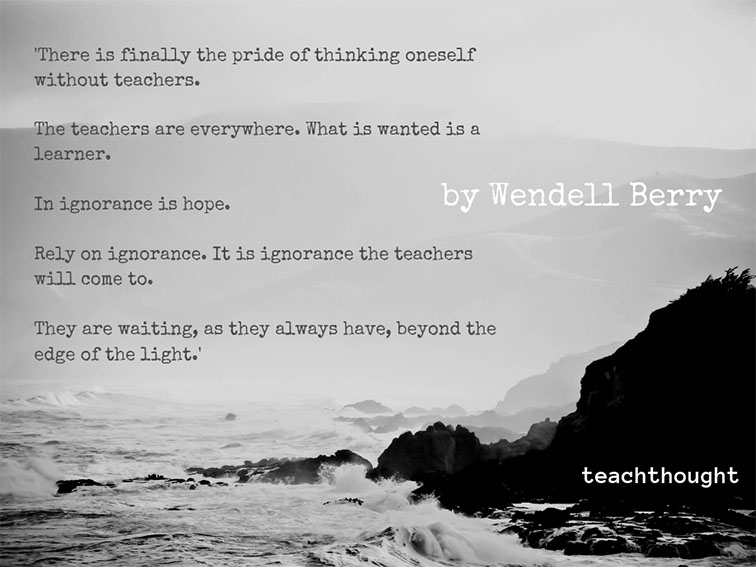 Wendell Berry’s influence on TeachThought is immeasurable, but I don’t write about him directly much.

I did write about meeting him, and created a crude sort of school model inspired by him called ‘The Inside-Out School.‘ I’ve also written some about ‘Wendell Berry and ‘good work,’ but only occasionally share excerpts of his writing. This is another one of those occasions.

Below is an excerpt from ‘Healing,’ an essay that appears in ‘What Are People For?’ a larger collection of essays published by North Point Press in which Berry attempts to etch out a kind of standard for living, thinking, and the shared interdependence among living things. The quote isn’t about ‘education,’ but rather the general spirit of humility and affection that leads to growth.

This metaphorical use of ‘teachers,’ though, doesn’t mean it doesn’t also offer a direct lesson for teachers. While the quote, so applied, would seem to imply that students ‘should listen more’ so teachers can ‘do their jobs,’ another interpretation and takeaway could be that the more consistently we are able to design learning experience that both ‘allow for’ and ‘create’ learners (as opposed to ‘students’), the more naturally learning can/will happen.

Good work finds the way between pride and despair.

It graces with health. It heals with grace.

It preserves the given so that it remains a gift.

By it, we lose loneliness:

we enter the little circle of each other’s arms,

and the larger circle of lovers whose hands are joined in a dance,

and the larger circle of all creatures, passing in and out of life, who move also in a dance, to a music so subtle and vast that no ear hears it except in fragments.

From the order of nature we return to the order — and the disorder — of humanity.

One enters the larger circle by willingness to be a creature, the smaller by choosing to be a human.

And having returned from the woods, we remember with regret its restfulness. For all creatures there are in place, hence at rest.

In their most strenuous striving, sleeping and waking, dead and living, they are at rest.

In the circle of the human we are weary with striving, and are without rest.

There is finally the pride of thinking oneself without teachers.

The teachers are everywhere. What is wanted is a learner.

In ignorance is hope.

Rely on ignorance. It is ignorance the teachers will come to.

They are waiting, as they always have, beyond the edge of the light.