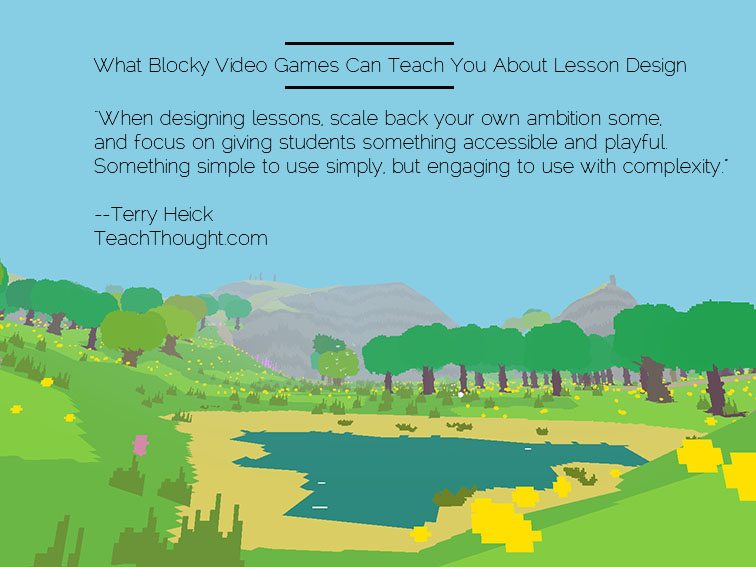 What Blocky Video Games Can Teach You About Learning

They (seemingly) lack polish and ambition. They’re not gorgeous.

They’re toy-like. They make you think you can reach in and play with it. Craft. Combine. Build.

This occurred to me today while watching the video below–a game called Proteus, yet another of the dozens of blocky video games that keep popping up. You can tell right away it’s reminiscent of Minecraft–square blocks of pixels used to create worlds unabashedly artificial. This is seemingly a step backward from the previous trend towards photorealism in games.

This is seemingly a step backward from the previous trend towards photorealism in games. Games were (and are) getting more complex, more detailed, and more realistic. They look almost real, and the artificial intelligence is bordering on sentient. Check out the image below–that’s from a game on Xbox One called Forza.

Then came mobile devices, which lack the graphical capability of video game consoles and computers, and forced developers to start from the beginning. So that was part of this trend–the necessity of hardware, and a rush of indie developers learning to code and make new kinds of games that let players create their own experiences.

But there is something especially approachable about blocks and pixels–something that encourages play and interaction. That takes the technology that is so immersive and nuanced and impossibly complicated and dumbs it all down for us to play with. That reduces the complexity without neutering the magic.

Proteus (the game in the video below), Minecraft, and other blocky video games understand this. They say that technology doesn’t have to be cutting-edge to make you feel something. And they say that creating and feeling and self-efficacy matter more than anything else.

There may be a lesson in this latest trend in video games for teachers: In your lesson design, scale back your general ambition, and give students something accessible. Playful.

Something approachable, sustainable, and scalable.

Something that is simple to use simply but complex to use with complexity.

What Blocky Video Games Can Teach You About Learning