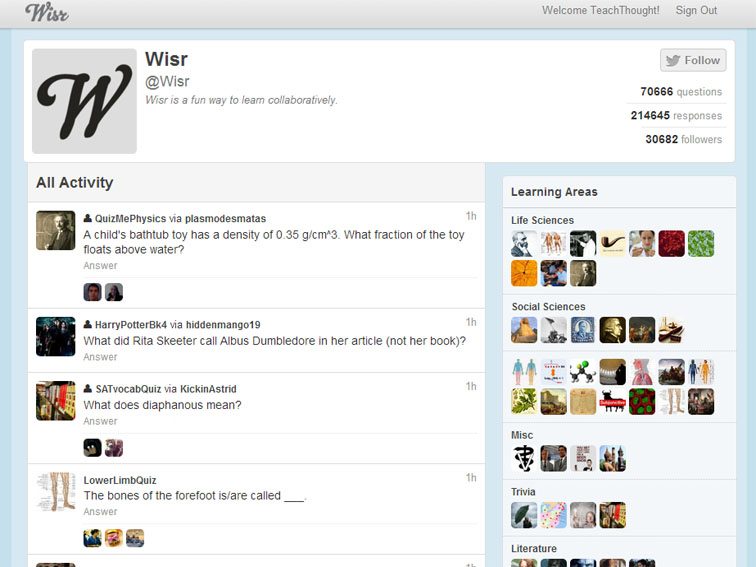 Twitter for learning is a topic that probably deserves some discussion.

In part because it’s an incredibly popular tool that connects people, and connecting people (and ideas) is what learning is about.

And also in part because such study can serve as a kind of analogue for existing and future social media platforms, from Vine and Instagram and Facebook, to the next great thing that is only now a sparkle in the eye of a shaggy-haired 20-something in a San Francisco coffee shop. In that way, how we teach and learn with twitter can serve as a lesson to inform future parallel pursuits.

It seems the good folks behind the studyegg startup have on moved on to another pasture, and that pasture is called wisr.

I won’t pretend to have tested wisr for weeks on end. I gave it a go for about 20 minutes just now, and came away intrigued. On the surface it looks to simply be a “social quiz” separated by content areas; the main “wisr” feed seems to aggregate the “subfeeds” of the various content areas: life sciences, literature, math, etc.

The site’s tagline is “Wisr is a fun way to learn collaboratively.” It offers up multiple choice questions, which you then respond to via “@” messaging. It immediately lets you know if your answer was right or wrong, and also shows the avatars of others who’ve answered the question as well.

Questions are almost all lower-level thinking, but the diversity available is impressive. The social interaction seems limited, but simply participating in academic quizzing socially immediately makes it more engaging than a pen-and-paper test.