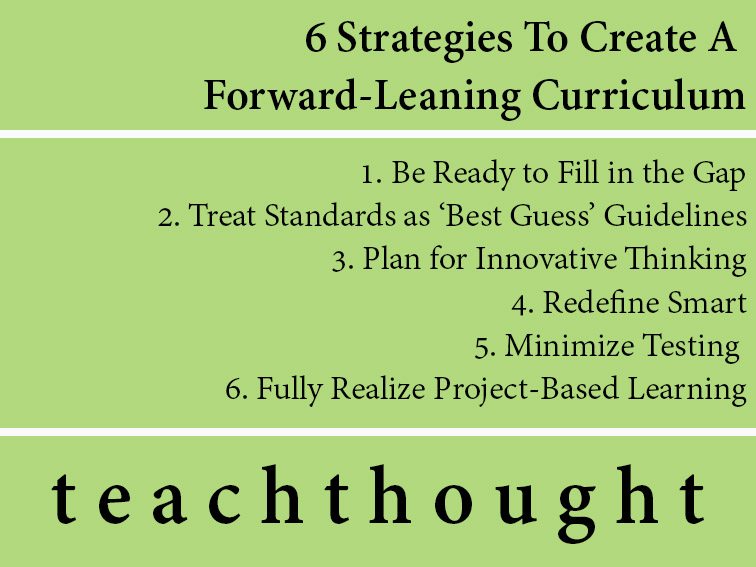 How To Create A Forward-Leaning Curriculum

It’s a cliché to say that change comes too rapidly now for us to keep up, but clichés exist for one good reason: They’re often true.

In the case of education—an industry that claims to focus on the future but remains powerfully committed to the past—the truth that our minds can’t operate fast enough to track shifts in the world has critical implications. How do we develop a system of learning at a time when everything we know about learning is in flux?

The current arguments over the Common Core State Standards underscore our confusion. The impulse of the Common Core writers, surely shared by even those who disagree with specifics, is a noble one: To find an antidote to the narrow test-based accountability and a laundry list of outcomes spawned by NCLB. By that measure, the Common Core standards were a healthy alternative, to be sure.

(Ed note: They’re a decent answer to a decent question.)

But here’s my wonder: How can any standards survive in a world in which technology, the changing nature of knowledge, a high level of chaos, and an acute need to solve global problems have cohered into one massive disruption of schooling? Is it possible that we are being propelled forward into a post-standards millennium in which the process of inquiry rather than the scholarly mastery of content becomes the central focus of education? In a chaotic world, are we reorganizing without realizing it?

Let’s stay with physics and say it like this: Is the trauma around standards a sign that we are passing through an event horizon into a different world of learning?

There are reasons to use this analogy. In general relativity, an event horizon is a boundary in space-time beyond which events cannot affect an outside observer. The reverse is also true: Observers can’t affect events. The point of no return—the point at which the gravitational pull becomes so great as to make escape impossible—has been reached. That’s where we may be in regards to standards, making the raging debate a side-show.

It’s hard to imagine, in fact, how content standards, no matter how cleverly written, can be the guiding force around which education in the future is constructed. There’s too much on-demand, online, networked, Internet of Everything information floating around. In a force-field like this, standards feel limited and archaic the moment they’re printed.

Teachers already feel this way. I see it in their eyes and nodding agreement, in their commitment to finding something deeper for their students, in their desire to serve their profession better. They know something is afoot; they just don’t how to describe it.

I say a better goal is to forget standards and focus on creating a culture of inquiry. Move away from the laundry list and keep our eyes on the prize: A full-on, problem-solving system in which the core outcome is to help students learn to think, collaborate, communicate, and feel. I emphasize the latter because solving problems, especially in the context of creativity and innovation, is a whole-body exercise.

Part of passing through the event horizon is the ultimate recognition that resiliency, empathy, purpose, and commitment to causes beyond the self must be engraved into the system. The problem with an event horizon is that you don’t know when you’ve passed through it, and I doubt you can really prepare for a black hole. But we know we’ve entered strange airspace, and we know enough to take preparatory action. A few steps seem obvious.

6 Strategies To Create A Forward-Learning Curriculum

1. Be Ready to Fill in the Gap

This seems obvious, but without standards, there is a big hole in our system. Standards have been immensely helpful to questions of equity and creating a shared mental model of classroom excellence that should be offered to all students, everywhere. This will need to be replaced by a stronger commitment to justice, a renewed appreciation that every child has earned the same global starting point, and that all schools must operate by the rules of high performance.

Since standards serve a purpose, they won’t disappear overnight. But let’s treat them from now on as if they represent a compendium of the best thinking of the human race about what it was important to know last year. Use them as a platform, a guideline, a reference for lesson planning, and a slightly-flawed measure of what we hope students will know in the future. As a teacher, decide what is non-negotiable, and teach that content.

Other than that, breathe.

Include a ‘breakthrough’ column on every rubric that offers students the open space to filter the standards through their own thinking and create original answers to authentic issues (and every lesson should have an authentic context).

Now it gets harder. In a system measured by mastery of process, what defines a scholar? How do we affirm excellence? What is the slimmed-down version of essential knowledge in a Google world? In essence, how do we move from content mastery to personal rigor—a kind of ready-for-the-world pose characterized by confidence, resiliency, curiosity, openness, and the ability to track down and integrate the information and skills necessary for competency in one’s life and work?

The obvious first step? Minimize testing and stop obsessing over cognitive skills. A second step is to admit a great truth about the world: We don’t know exactly what the scholar of the future looks like. So let’s use deep, well-constructed performance rubrics that honor the whole child, assess growth in attitude and thinking skills as well as content, and allow children to inform us about their future.

A second step is to admit a great truth about the world: We don’t know exactly what the scholar of the future looks like. So let’s use deep, well-constructed performance rubrics that honor the whole child, assess growth in attitude and skills as well as content, and allow children to inform us about their future. So evaluate learning, yes. But let’s minimize testing and stop obsessing over cognitive skills.

But all the PBL tools—a well-crafted Driving Question to frame the problem solving, protocol-based teamwork, and multiple assessments based on a mix of skills and content—work fine under all conditions. The Monday morning solution? Stop seeing PBL as a one-off foray to satisfy that last cluster of ‘problem-solving’ approaches in the Common Core.

Instead, make PBL disappear. In an inquiry-based school, it should be nearly indistinguishable from general instruction.

Make collaboration the foundation for ‘skillful’ behavior. Beyond the event horizon, one fact is predictable: we will fly in teams, in a net-worked, relationship driven environment. Already, it is impossible to separate out what you know versus what you learned online yesterday. The mind-meld is here, and the near-term goal for schools is to let go of the model of the isolated scholar and help young people learn to collaborate in effective, creative, respectful ways.

This is critical because without collaboration, the other 21st century skills—communication, critical inquiry, and creativity—don’t blossom. The skills of the future derive from a holistic, internal process still to be determined. The Monday morning solution? Take serious note of the emerging social neuroscience showing that deep connectivity occurs through brain and heart functions, co-creating a growth mindset and collective resiliency, particularly when interactions are founded on positive emotions.

In other words, non-judgment, openness, and empathy are the true keys to competency in the 21st century.

Alfred North Whitehead said it well in 1916: “The second-handedness of the learned world is the secret of its mediocrity.” Moving to first-hand grappling with the intellectual and social issues of the day is now a paramount goal. If we’re teaching to nurture inquiry, we can’t teach to the test alone. Nor, in the face of evidence that a degree by itself is not sufficient, can college and ‘college-readiness’ be held up as the carrot to drive performance.

To liberate the purposeful behavior required to fuel deeper learning, students will need a compelling reason to engage content. The Monday morning solution? As much as possible, organize instruction around service and issues that matter to the future of young people. Don’t start with standards; start with what matters, and then fit the standards into instruction—carefully.

Thom Markham is a speaker, writer, psychologist, and internationally respected consultant in the critical areas of inquiry-based education, project-based learning, and creativity. Thom is the author of the best selling Project Based Learning Design and Coaching Guide: Expert tools for innovation and inquiry for K-12 educators and the co-author of the Project-Based Learning Handbook, published by the Buck Institute for Education. Email [email protected] or follow @thommarkham; image attribution flickr user notsogoodphotography; A Culture Of Inquiry Through A Forward-Leaning Curriculum