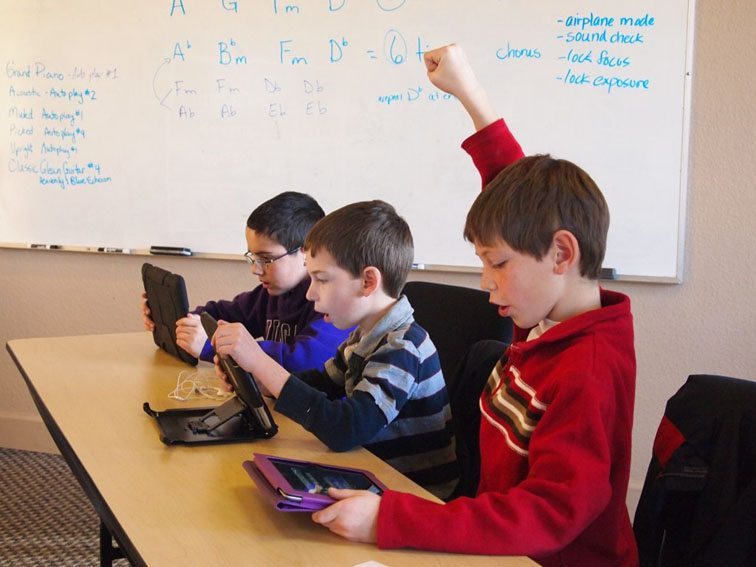 The Brutal Authenticity Of BYOD

By its very nature, BYOD is authentic.

As students bring their own devices—and with them, their own apps, accounts, and tech-use patterns—what is is naturally revealed, for better or for worse. With the mounting (and completely logical) demand for better technology in classrooms, BYOD is one response to that pressure.

The Thinking Behind BYOD
“Digital natives” or not, technology dropped into the laps of students in schools isn’t always as accessible as it might be. By allowing students to bring in their own devices for learning–rather than insisting that they learn both content and device in school–there is an important opportunity to connect with not just their personal lives, but their natural way of doing things.

BYOD provides students not just with a device, but apps–and thus pathways–to solve problems. If you think this is a minor thing, stand in a middle school classroom with 32 students and watch a teacher coach—and coax–students through computer-based testing on a room full of laptops.

While the best teachers mitigate this ahead of time by supplying log-ins, double-checking passwords, pairing students, offering screenshots, modeling the process on a projector, this is a tremendous waste of what many districts call “instructional time,” and what students call “school.”

BYOD, on paper, attempts to solve a significant part of this issue.

The Shift
Starting in the spring of 2012, Georgia’s Forsyth County began allowing students to bring in their own devices. They installed a separate wireless network that offered filtered internet access. They trained teachers. Then they installed some ground rules, closed one eye and grimaced, fearful of what might happen.

And for the most part, it worked.

In a blog post on Innovative Educator, Tim Clark, District Instructional Technology Specialist (ITS) for Forsyth County Schools, explained the shift that occurred once students brought in their own technology. “As the teachers began to introduce BYOD* into their classrooms, some fundamental changes began to occur. They no longer had to teach their students about technology in order to integrate technology effectively in their classrooms because the students were already the experts with their own devices.”

“This change in practice (adopting a BYOD program) can evolve as the teachers allow themselves to become collaborators with their students in the learning process. When the students first bring in their technology devices, they are immediately engaged and want to explore all of the possible capabilities of the technology. This initial phase of exploration passes quickly as the students become more literate in their devices and learn how to connect them to the BYOD wireless network. The teacher and the students then begin to adapt their technologies to their current classroom practices.”

Such expertise, though, assumes they have their own devices.

For poor students, especially those in poor urban and rural areas, a chance to “bring in their own device” could be an opportunity for embarrassment or bullying, exacerbating existing chasms between groups of learners. Even a Blackberry is laughable to the tech elitist. A flip phone, or, worse, no phone at all?

While economic disparity is very real, it turns out that in the United States, there is an emerging cultural reverence not just for technology, but specifically for smartphone technology. As a badge of social status, only the poorest students don’t have something in their pockets. And for the rest? Very acceptable Android devices can be had for less than $100, and used for half that.

While there are students who badly want technology and can’t afford even the $50, that doesn’t seem to be a strong argument against BYOD adoption, especially in light of what it costs—in time and money—to purchase, train, integrate, and maintain—state-funded, district-purchased, school-assigned devices. This is where schools, local organizations, and communities can step in.

Money and Learning
BYOD’s most powerful characteristic isn’t its frugality or charm, but rather its inherent transparency. These devices can be a window into the home life, economic status, or whiz-bang efficacy of an engaged student with a familiar device in-hand.

The San Diego Unified School District in California has spent over $15,000,000 in purchasing over 26,000 iPads. That’s fifteen million dollars. (And we see how that turned out.)

And that picture you have in your head of 26,000 iPads in the hands of all learners in the district is inaccurate. The iPads were bought primarily for use only in middle schools. So fifteen million dollars just for one device used at one level in one district.

In the United States there can be a tendency to throw money at problems that are not fully understood. As a nation, America lags behind internationally, the “learning market” being one of the few markets proving evasive in lieu of continued effort, struggle, and spending.

We might’ve learned by now, however, that money can’t fix everything. In fact, it can make things worse, as it offers the illusion of a “solution,” and gives enterprising entrepreneurs cause to package such solutions and dangle them like carrots. And being used to such patterns, we look outward for “options,” instead of inward, for what’s already here.

BYOD takes that and turns it upside down—or right-side up—by attempting to leverage existing assets that are natural to learners, and not subject to Draconian district policies. Even in economically suppressed areas this is not so much a challenge as an opportunity to reset at least some hint of the power balance back in favor of the student—and authenticity.

This doesn’t mean schools shouldn’t supplement student-sourced technology with their own. It also doesn’t mean that such implementation won’t be a struggle, or that it will work swimmingly every step of the way.

But it does improve transparency and authenticity, while encouraging learners to work with apps, programs, and hardware they’re familiar with and have experience trouble-shooting through. It empowers learners to solve problems, access resources, and even create their own workflow patterns if given the flexibility at the unit or lesson-level. And maybe most usefully, it provides a window into the homes and habits and access and digital literacy of students.

For better or for worse, this is at the core of student-centered learning.

Ed note: This post has been updated and republished from a 2012 article; The Brutal Authenticity Of BYOD; image attribution flickr flickeringbrad and byot