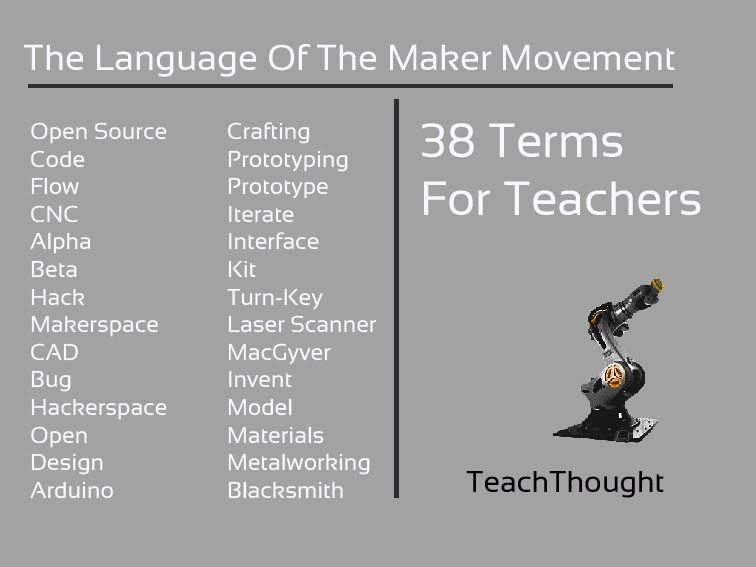 The Language Of The Maker Movement: 38 Terms For Teachers

As the maker movement in culture moves from MacGyver jokes and what Noah did when Allie left him in The Notebook to something with a bit more academic and cognitive credibility, it has also begun to creep in to the education space.

As with any niche, there is specialized language–jargon–that may keep things murky for you. The 38 terms below by no means represent an exhaustive collection. (There are dozens of gadgets, circuit boards, and digital, robotic, and electrical wizardry we left on the cutting room flow.) But for most teachers in most circumstances, it should serve as a nice starting point.

1. 3D Printing
The printing of objects rather than paper. (One day this will almost certainly include human organs, so there’s that.)

2. Alpha
A very early build, or model; “alpha” products can come in a variety of states of production, from completely unfinished to nearly ready for beta testing

4. Beta
A build that lacks polish and refinement, but is mostly functional and ready for more widespread testing

6. Bug
A flaw in design or execution, often referring to an error in computer code.

7. Coding
The collection of alphanumeric characters in certain computing languages to produce software, including apps, games, and web design

8. Crafting
The combination of two or more ingredients to make something new; see everything from cooking to Minecraft

10. CNC
A machine used to precisely cut and shape physical materials, including metal and wood

13. Design
Strategic decisions for a specific purpose–project-based learning, for example.

14. Electronics
The design, study of, and experimentation with hardware (of any size) energized by electricity (of any amount)

15. Hack
To strategically probe, analyze, break, or hi-jack; a revision of existing software or hardware to make it perform in a way other than it was designed

16. Hackerspace
A digital or physical space where one or more hackers adjust existing designs for a variety of purposes

17. Interface
How/where a user interacts with software or hardware

18. Invent
To create something that didn’t exist before

22. Laser Scanner
Laser hardware that can creates a 3D digital representation of a physical environment; also called a 3D scanner

24. Make
To move from design to product; to build, craft, conjure, code, or otherwise manifest

25. Makerspace
A garage space, classroom corner, workbench, design lab, or other area where the actual physical construction of designs occur

27. Metal and Wood Crafting
The creation of traditionally crafted items, including cabinets, gates, lamps, and other often functional products

28. Model
The use of an existing ‘design’ for new design ideas

29. Open
A philosophy of sharing (ideas, resources, and approaches) and transparency (designs, failures, and successes)

30. Open Source
The communal building and iteration of existing software or hardware; the formal practice of sharing design

31. Play
An underlying tone of “making,” and a critical dynamic of the Maker Movement

32. Prototype
The first example of a design; an early model built for testing purposes

33. Reverse Engineering
The discovery of design thinking and function through the analysis—and sometimes deconstruction—of existing functioning models; unbuilding stuff to see how it’s made

34. Robotics
The use of mechanized and humanoid

36. Tinker
The playful and curious interaction between a maker and their “things”

37. Turn-Key
A kit ready complete with everything necessary to function.

38. Rapid Prototyping
The approach of design through refinement; creating an often crude alpha model for the purpose of testing; this approach is characterized by a fast development cycle and long-term iteration, rather than extended development leading towards a production-ready product

The Language Of The Maker Movement: 38 Terms For Teachers