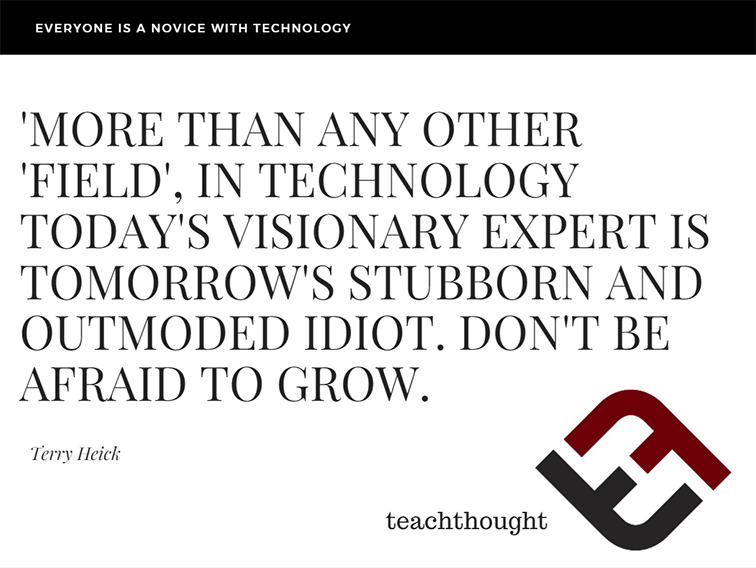 Everyone Is A Novice With Technology

Everyone is a novice with technology–and they always will be.

Let’s me try to explain. Technology isn’t a thing or a way, but a context. If we narrow our focus to the last half-century or so, we can that it started about the former–some ‘thing’ to watch and appreciate and see.

Technology is a relative term whose function we’ve been benefiting from since the dawn of humankind, from the wheel to plastics, metal working to water filtering, aqueducts to electricity, antibiotics to WiFi. It is also interesting in the way that it becomes less visible the better it gets, disappearing into the background as we take it for granted as if it’s always been there, and always will be.

Technology is ubiquitous, fluid, and most fundamentally a matter of human experience. We, as a species, craft things for our own use–bending the world, we naively believe–to our will. This crafting is ongoing in a back-and-forth with what we, as a species, need and desire, and what technology, as it contextually functions, is able to provide.

In the late 1990s, Ken Funk from Oregon State University shared some ideas about the different ‘ways’ of technology.

The era here is critical because it computer technology was still alien and new, and as a culture we hadn’t yet fallen in line with it so thoughtlessly as we do today. We (to a degree) considered it the way we might a bowling ball-sized meteorite we found in the back yard. We were fascinated and curious. And because it was all new, our analysis had a sense of urgency to it.

The word technology comes from two Greek words, transliterated techne and logos. Techne means art, skill, craft, or the way, manner, or means by which a thing is gained. Logos means word, the utterance by which inward thought is expressed, a saying, or an expression.

So, literally, technology means words or discourse about the way things are gained.

First, technology is the rational process of creating means to order and transform matter, energy, and information to realize certain valued ends. The significance of this definition will become clearer below.

Third, technology is the knowledge that makes the technological process possible. It consists of the facts and procedures necessary to order and manipulate matter, energy, and information, as well as how to discover new means for such transformations.

Fourth, a technology is a subset of related technological objects and knowledge. Computer technology and medical technology are examples of technologies. Large computers filled rooms to accomplish even basic tasks.

Considering ‘technology’–formerly one thing–as multiple ways is important. This kind of macro thinking about technology is absolutely available today from writers like Nick Boston and Kevin Kelly and Alec Ross, but society in general is less interested in understanding how it works and why, or what we might want to look for, and what kinds of questions we might ask. This leads to a kind of persistent novice status for almost everyone.

The Pattern Of Technology

Just as technology transitions from more visible to less, it has other trends and patterns–in terms of our collective cultural consciousness, for example.

This is actually the pattern most technology takes:

And as a ‘thing’ (as its own kind of brand) it’s separate from other ‘things.’ It’s Google Earth, for example, rather than a digital globe.

As more people use it and it becomes more deeply embedded in how we live and use related technology–wearable technology, for example–it becomes more acutely defined in terms of it’s function over its form, sometimes even becoming its own verb (e.g., ‘just Google it’).

Then it’s a context.

Now both known and embedded, it kind of ecology collects itself around the tech (if it’s good/successful tech). It’s a thing that is a way and now is a setting for our collective behavior as a species. We tweet ideas instead of forgetting them. We look to facebook to ‘see’ people we miss. WiFi means we can do things, and no WiFi means we often can’t.

And then, at last, the technology disappears. Becomes invisible. An afterthought taken for granted, leap-frogged by better tech, or abandoned altogether.

There, of course, side effects to this process.

We’re All In A Constant State Of Ignorance

Humans create meaning–concepts like ‘compelling’ and ‘necessary’ and ‘imaginative’ are uniquely human. We create the perceived (or real) need for the tech while also creating the terms for its fulfillment. Further, we create the tech and its failure or success. It’s very strange, and we haven’t even gotten into the fluidity of knowledge.

More than any other ‘field’, in technology today’s visionary expert is tomorrow’s stubborn and outmoded idiot.

Which brings us to your classroom.

We’re all novices. You’re not an expert in technology. No one is, because it’s already changing. You either use it or you don’t.

It’s possible that you may use it more creatively or efficiently or even expertly, but the ground is always disappearing beneath us. What you did today means less tomorrow, and even less this weekend. You may or may not use it will today, but today is almost gone anyway. What about tomorrow? What context will it bring?

It’s a thing that becomes a way that becomes a context that disappears, and this process loops. It has with mobile phones and apps, and will with wearable technology, then Artificial Intelligence and biotechnology and so on. The wheel keeps spinning–the spot you missed yesterday is coming back around fast.

And while some of this may come off as tech worship and hyperbole, it’s absolutely not. This isn’t an endorsement but a kind of jagged analysis. This is happening no matter what we think of it.

Education continues to suffer from a startling lack of vision and innovation, even as the ground is disappearing beneath it as well. Pay not attention to the man behind the curtain. Let’s continue to focus on ‘mastery’ of content whose value is dubious, and whose context is swirling in change.

So here’s the lesson: We’re all novices with technology because of the nature of technology. So if we’re all, broadly put, novices then use it thoughtfully and creatively.

Resist the temptation to “be trained” and use it playfully on your own, if for no other reason than that’s exactly what your students are doing, and is–fiercely and urgently–the world that’s evolving around them.

The companies that lead today will fall tomorrow, or be shamed by the next great technological advance that they, for whatever reason, couldn’t quite see coming.

Find your way–reach out for ideas, even as they dissolve just before your can grab them.