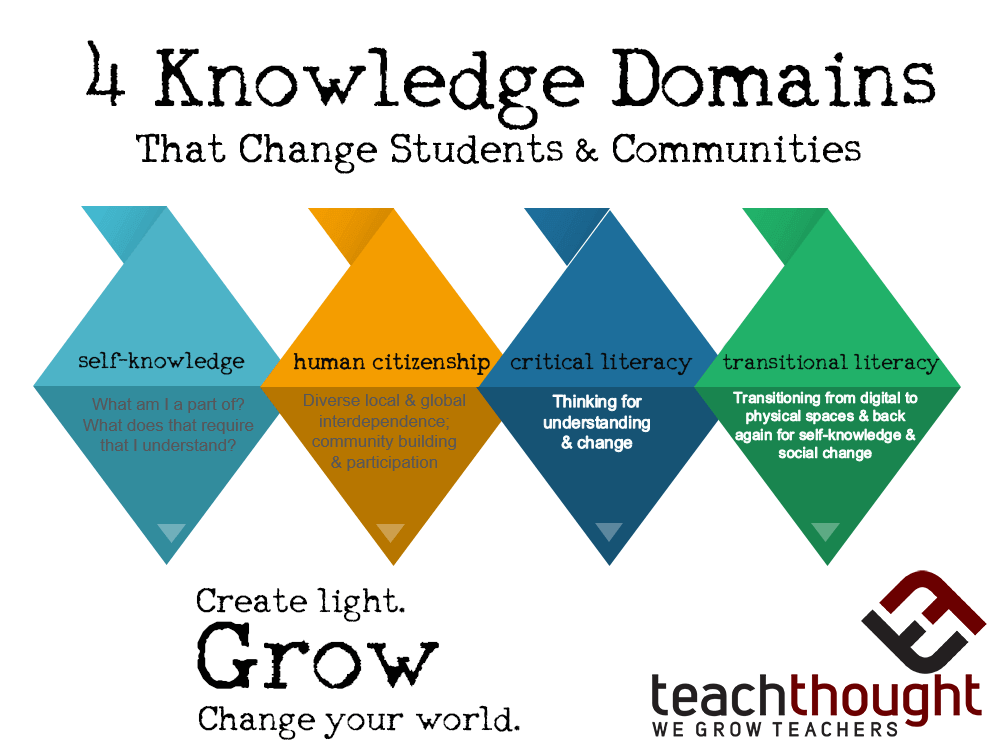 As academic standards shift, technology evolves, and student habits change, schools are being forced to consider new ways of framing curriculum and engaging students in the classroom, and project-based learning is among the most successful and powerful of these possibilities.

Of course, content knowledge matters. It’s hard to be creative with ideas you don’t understand. Academics and their ‘content’–organized in the form of ‘content areas’ like literature, math, and science–are timeless indexes of the way we have come to understand the world around us through stories, patterns, numbers, measurements, and empirical data.

The idea here, though, is that we (i.e., the field of public education) have become distracted with academics. Knowledge is only useful insofar as students tend to use that knowledge as they grow into adults that live through doing so. Studying philosophy or physics or poetry but not living through them–that’s the difference between knowledge and academics.

As both a planning and a learning tool, project-based learning challenges teachers to make new decisions about how they plan student learning experiences, while simultaneously empowering students to take a more active role in the learning process.

If the learning process is personal, a student becoming active in the learning process is also becoming active in their personal growth. Projects that are tied to their inherent curiosities or that address the problems and opportunities native to their ‘place’ and family and human context are not merely authentic–they transcend the learnimg form (project-based learning in this case) so that it becomes transparent. And that’s a good thing.

In this context of trying to make since of exactly what progressive learning was, in 2009 I sketched out a graphic that visualized 9 Characteristics of 21st Century Learning, and recently created a follow-up framework, The Inside-Out Learning Model.

The idea here is to clarify the kinds of critical knowledge–and knowledge domains–that create actual change in the lives of students and communities.


1. Self: Who am I? What am I a part of? What does that require that I understand? How can I come to understand it?

4. Transitional Literacy: Transitioning from digital to physical spaces and back again for self-knowledge and social change

Secondary goals include purposefully leveraging the diversity of digital media, evolving the traditional definition of project-based learning, the role of play in learning, curiosity, and individualized learning pathways that are digitally curated and transparent to all direct and indirect stakeholders.

In the Inside-Out Learning Model, the idea is personalized learning by new actuators, the elimination of passivity, and full integration with responsive and authentic communities—not coincidentally all talents of project-based learning.

While watching all the ed reform trends come and go, one visual that has often intrigued me is a school that’s literally been turned inside out.

This thought first occurred to me as a second-year teacher in rural Kentucky struggling to clarify to the parents how their son or daughter was performing in the classroom. So often I found the letter grades incredibly misleading. Learners that were really making strong progress and ‘learning a lot’ would often bring home Cs, while many students ‘A students’ would be doing just enough for that A.

And even then, these alpha-numeric icons were simply describing trends and compliance and expressed very little about understanding even as I shifted towards standards-based grading. With letter grades, As represent complete and total mastery of content, while Bs represent above average understanding, and/or near mastery of content. Cs meant average, and the idea of being ‘average’ was jarring to students, but maybe more so to parents.

Cs were death knells, and many times even students with Bs had some ‘splainin to do, and few seemed to notice this as a problem. There was a need for parents in the classroom, while students needed to be out in the community.

So then, this idea about the difference between learners and students: There definitely seems to be one. Students hopefully learn, but the word ‘student’ connotes compliance and external form more than anything intrinsic or enduring.

You might notice the ‘C student’ silently piecing together the learning process for themselves—internalizing it, throwing out what didn’t work, struggling in spots, but all the while becoming learners. They’d rarely question grades or ask ‘what they could do for an A,’ but instead focused on the interaction between themselves and the content.

This was a startling contrast that was nearly impossible to clarify for parents when they wanted to know ‘what was going on.’ As a teacher I wanted a class full of learners, but the grading process was giving me a lot of students who were learning to play the game. The problem, however, was not as much about letter grades and traditional academia as it was about the ‘form’ of the school.

Its physical layout. Its tone, from extracurricular programs to academic reputation, certificates, credits, and downright monstrous notions of ‘achievement.’ The relative lack of diversity of its sources of academic and instructional content. The internal audiences for school projects. And most of all, the need for real interdependence between that school and the community it was funded by and built to serve.

To move from students to learners–well, there are probably dozens of ways to make a move like this, but somewhere on that list is using technology, project-based learning, and place-based education to truly turn a school inside-out.