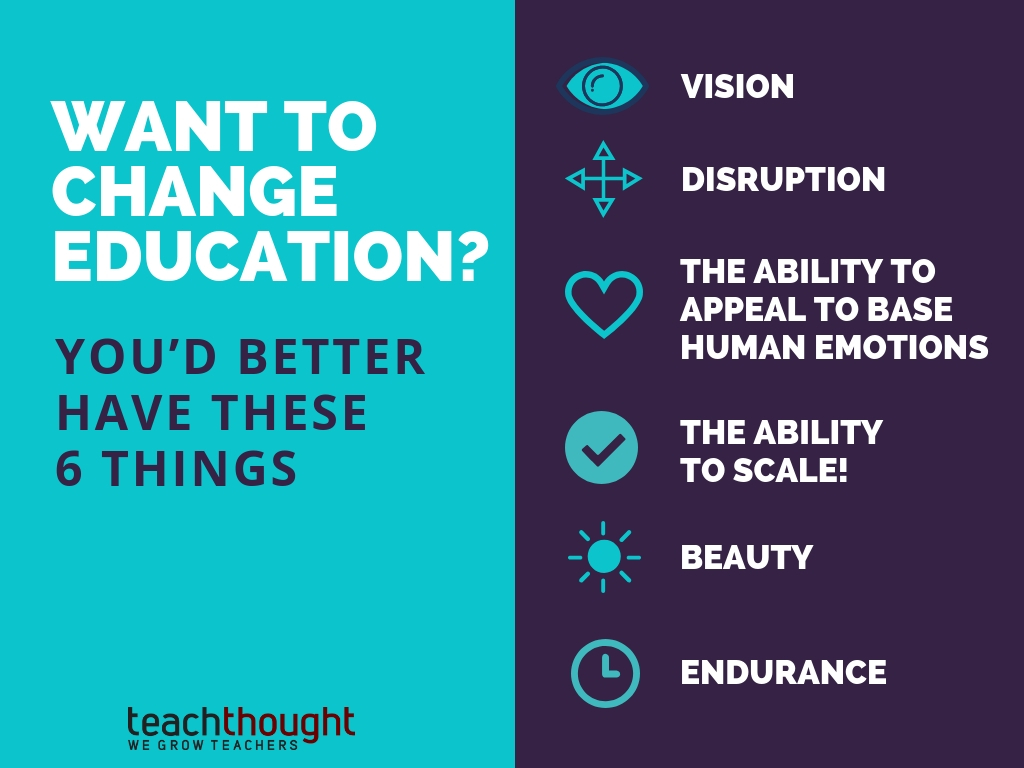 You Need These 6 Things To Change Education

Every afternoon, after failing to take a nap because I make everything harder than it has to be, I pout down to Starbucks for coffee and a book.

Today a teacher I used to work with walked by, and we caught up for a moment. He works at an urban Title I school, which is where I met him a few years ago. He asked what I was doing, and I said something about TeachThought and disruption and new ideas about learning and how is your coffee anyway?

His eyes kind of glazed over, because why wouldn’t they? He works in an all-boys academy with a history of both achievement and failure, and to listen to me talk about “wisdom” or “mobile learning” was like listening to Bill Gates talk about budgeting. It’s easy to think big when that’s your job.

He said he felt his school was ‘turning the corner,’ and I asked about that, as that was a central question of ed reform–how do we know if a school is ‘performing’? Not just “‘improving,’ but doing what it’s supposed to do.

Which is impossible because I haven’t seen a unifying vision statement for public education that isn’t hogwash.

Why Does It Seem Like There Are So Few Great Ideas In Education?

He gave a bulleted list of reform items, from test scores to attendance to grade point averages that offer a full picture of performance. I’ve speculated before about the characteristics of a high-performing classroom, but never a school. Which I need to do.

But more immediately, the conversation underscored, for me, the lack of great ideas in education.

Why was there literally nothing he could point to and shake and celebrate and say this is what we’re doing and it’s awesome. Something faultless and wonderful and exhilarating? We have hundreds of children that come to us every day for hope and affection and good ideas, and we promise them efficiency?

And why was there nothing on my end I could suggest either? The best idea I have is connected, human communities of careful thinkers making sense of the world together in pursuit of wisdom, and ultimately the good work of their life. Maybe mobile learning–mobile as in beyond the classroom. Schools-as-think-tanks. Digital citizenship, and why questions are more important than answers Learning through simulations. Apps as textbooks. Self-directed learning. Maker Ed.

Why does none of that jump off the page?

I’m not sure. Some of it may have to do with the lack of clear purpose for education, and thus for schools as agents for education. Very little of the above makes for a “better school.” As a result, people are less interested in standing out than they are pushing the machine along because that’s how the machine is designed. Innovation in a school comes across like a misstep in a dance, because innovation doesn’t care about the dance, and the dance doesn’t need it.

There are few mechanisms in the system of public education that emphasize innovation and forward-thinking. The applause is almost always for performance within that system. Think of the most popular education technology out there and what it does. It’s almost never disruptive. It makes teachers jobs easier, or helps solve a common problem.

Do this for long enough, and you no longer see the system at all. You look for letter grades and test scores and attendance and dropout rates to tell you you’re doing it right.

Do what right? School, or human capability?

Want To Change Education? You’d Better Have These 6 Things

So what would a “great” idea “be”, then? For starters, any great idea in education should probably be characterized by one or more of the following.

Shift paradigms. Make us see what’s possible. Dare to dream. Make it so that we can’t remember what it was like without it. So that we see everything else different because our whole way of seeing is different. That’s substantive change.

It should probably be uncomfortable. Messy. Annoying. Make us have to do this and this all olver again because of that new thing. If it only lubricates what you’ve always done, it’s probably not great, and will be forgotten the moment the next lubricant comes along.

3. The ability to appeal to base human emotions

One great idea should spawn countless other great ideas, a conceptual copy-pasting that is joyful and addictive and crazy fun.

Courage. Hope. Love. Belonging. Progress. Fear. Popularity and trend. Whatever you do, make it ‘human’ to make it stick.

4. The ability to scale!

Works on a variety of levels without clumsiness or inefficiency or degradation of performance. Full macro. Work small and big. The classroom and the district and the state and the federal level. In India and the US and U.K. and Australia and Africa.

As in, beautiful moments where we forget what we’re doing because the flow of it all is so human and powerful and moving that we feel like we’re flying. And that means everyone–students, teachers, parents, and communities, all witnessing this beauty and in collective awe.

Beauty is an icon–a form that’s naturally compelling and instinctively pure. A great idea that helps us handcraft the minds and hearts of children should be beautiful.

If it’s great, it lasts. It just might be that even great ideas die without being nourished, so that public education acts as a kind of graveyard for all of our best thinking. Seems that way sometimes, but let’s just hope this isn’t true.

The Requirements For A Great Idea In Education; word count attribution caffeine; Want To Change Education? You’d better Have These 6 Things