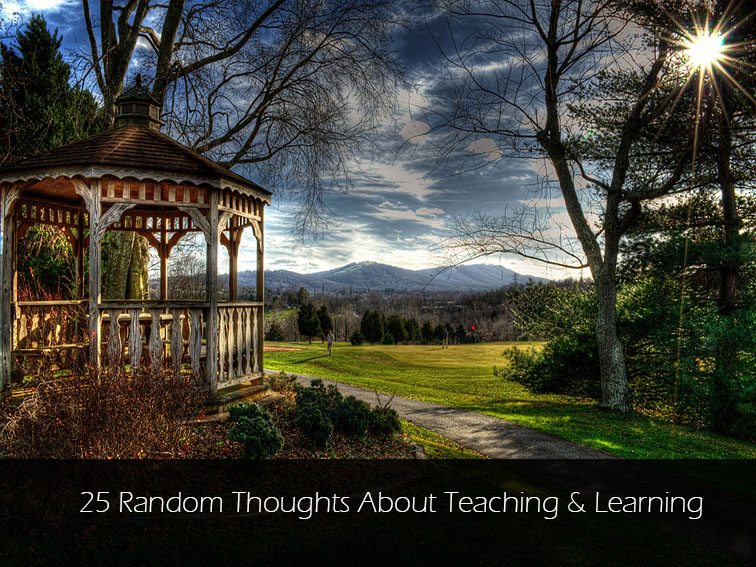 The picture? It’s Spring, and I missed the sun.

On to the random thoughts…

That #makered is as much a tone as it is a trend.

Every school and district needs a “Chief Change Officer.”

That “screen time” may be an under-studied phenomenon worthy of some research.

That Meerkat is pretty amazing—and has stunning potential. That in terms of function, it’s not markedly different from Google+ Hangouts or Skype, but because it ties to twitter and forces you to record and share live and isn’t prefaced with “Google,” it seems more interesting.

That learning starts with the student, not a standard or map. That this is hard to actuate in a class of 32. That how we plan and teach today makes it pretty much impossible. And that this—if both true in any sense, and communally understood—means we’re producing mediocrity on purpose.

That so many #edtech developers with decent ideas don’t understand the need for visibility, testing, feedback, and ecosystem. Marketing, too. (And that “boot strap” and “start-up” mislead a lot of folks into pushing forward with bad ideas.)

That edtech is focused almost exclusively on automating and digitizing the existing classroom. That unlike the lower-end of Bloom’s Taxonomy, the lower end of the SAMR model is not a great place to be.

That there is nothing wrong with memorization.

That Apple’s Apple Watch event was more awkward than usual, and that their 18 carat gold Apple Watch should, once and for all, deflate the Apple is for Education argument.

That mobile learning is already here, and if we can’t design with it in mind, we’re already behind.

That education buzzwords diminish understanding because of their reductive effect. Easier to talk “1:1” than it is learning models that realize 1:1 potential.  That this isn’t limited to #edtech—the term “best practice” has done this for years.

That there is more attention on and enthusiasm for progressive, 21st century learning than ever before.

That one can perceive a shift from Apple to Google in the preferred edtech brand, but that Microsoft is still killing both in terms of usage.

That it’s not as simple as “What’s best for the kids.” Unsustainable approaches to education are, well, unsustainable. For everyone.

That parents need help understanding education. That the fact that they don’t is the fault of education.

That in 2015, anyone can create almost anything, for any reason, with anyone.

That the best answer isn’t always the most popular. That in fact, they’re often inversely proportional.

That what a teacher believes school “is for” will dictate the tone and terms of their teaching. That this is somewhat adjustable, but not entirely accessible because it’s at the belief level of a person.

That you’ll know it when you see it.

That you’re pretty spectacular for doing what you do, improving every day, and choosing to take an active role in something bigger than yourself.

That learning can be addictive—should be addictive. Get it right, and you can’t get enough.

Responding To Criticisms Of The Common Core