Correcting The Deficit In Critical Thinking 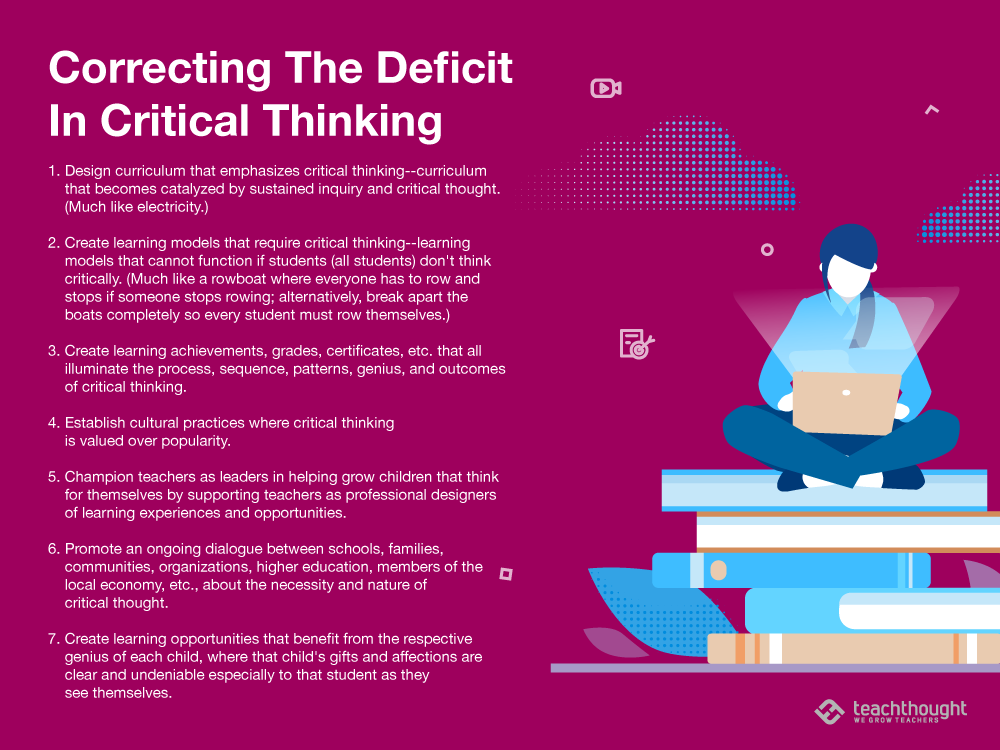 Correcting The Deficit In Critical Thinking

As a culture, we have a thought crisis–namely, a harmful and enduring refusal and/or inability to think well and think critically.

This is just an opinion but I hope not a radical one. To clarify why this crisis exists–or even why I believe it exists–would require a sweeping analysis of cultural, societal, political, and other anthropological terms beyond the scope of TeachThought.

For starters, skim through almost any social media ‘discussion’ about any culturally critical issue. If you disagree that such a crisis exists, the rest of this article will likely not be worth your time. If we can assume that statement to be at least partly true though, we can see that as an industry, then, we have a crisis in education that is both a cause and effect of the above.

Education both causes and is an effect of thought. Education and thought, at least conceptually, are as connected as the architecture of a building and the building itself.

In part, this ‘thought crisis’ is also a crisis in language and is related to a parallel crisis in affection. Connected are deficits in utility, knowledge, patience, place, and cultural memory. But for our purposes, let’s discuss a central crisis among the crises: A deficit in critical thinking.

This is in part an issue of thought subjects and thought quality: what we think about and how.

On the surface, education–as it is–is not about teaching thought but rather about content. This shouldn’t be controversial, really.

Education As It Is

Education is, roughly, arranged into content areas and stratified by age. On a wide view, the general structure can be thought of like a large grid: The columns are the content areas and the rows are the ‘age.’ We could also consider it the reverse and it wouldn’t change much.

These content areas tend to become more complex but are only intermittently specialized (‘science’ becoming ‘chemistry,’ for example even though chemistry is still a science; for the record, I’m not sure why we don’t show at least a little vision and wed science and the humanities into ‘new content areas‘ that aren’t content areas at all but realize that this is crazy talk to most and will save my breath).

The point is, education–as it is–is about content and mastery of content is about points and grades that either does or does not result in certificates (e.g., diplomas) that allow increasingly specialized study (business, law, medicine, etc.) in post-secondary education (like college/university) for the purpose of ‘career prep’ (which, I’ve offered, should not be the purpose of school).

The above is neither a comprehensive analysis and there are countless exceptions of learning approaches and forms but they’re still exceptions and the above not misleading, as far as I can tell, in its characterization of modern public learning forms and spaces.

And if the above is more or a less an accurate thumbnail of how human beings learn in formal education, it should become at least somewhat clear that we have a problem.

A kind deficit, if you will.

The McDonaldization of The Classroom

You can’t evaluate the quality of a ‘thing’ without knowing what the thing ought to do. This is simple for kitchen utensils and challenging for art and affection and people: To clarify an education and what it ‘should be’ is to impart what ideally is a very personal and ‘local’ philosophy on everyone else. This is because of the nature of standardization.

In 1993, George Ritzer wrote a book–which owes itself in large part to previous work by many, including Max Weber–called The McDonaldization of Society. The book is an exploration of the causes, effects, and nature standardization through the lens of the McDonald’s American restaurant chain.

McDonald’s is hardly the first business to leverage such standardization. In fact, Industrialism itself–the spine of 20th-century America–owes itself to the concept in many ways ushered into ‘popularity’ by Henry Ford. Whether or not you find a ‘problem’ with industrialism is first a philosophical concern. An overview of the concept explains the gist especially as it relates to the lineage of the concept.

George Ritzer has taken central elements of the work of Max Weber, expanded and updated them, and produced a critical analysis of the impact of social structural change on human interaction and identity. The central theme in Weber’s analysis of modern society was the process of Rationalization; a far-reaching process whereby traditional modes of thinking were being replaced by an ends/means analysis concerned with efficiency and formalized social control. For Weber, the archetypical manifestation of this process was the Bureaucracy; a large, formal organization characterized by a hierarchical authority structure, well-established division of labor, written rules and regulations, impersonality and a concern for technical competence. Bureaucratic organizations not only represent the process of rationalization, the structure they impose on human interaction and thinking furthers the process, leading to an increasingly rationalized world. The process affects all aspects of our everyday life. Ritzer suggests that in the later part of the Twentieth Century the socially structured form of the fast-food restaurant has become the organizational force representing and extending the process of rationalization further into the realm of everyday interaction and individual identity. McDonald’s serves as the case model of this process in the 1990’s.

In the book, Ritzer explains that one effect of endless rationality is irrationality: “Most specifically, irrationality means that rational systems are unreasonable systems. By that I mean that they deny the basic humanity, the human reason, of the people who work within or are served by them.”

Which brings us back to education and our deficit in critical thinking.

Standardizing anything is a trade. I’ve talked about this dozens of times before–here for example. And here. And dozens of other posts and tweets and articles because, it seems to me, it represents one of the inherent flaws in our design of modern learning. In short, in education as it is, every single student regardless of background, ethnicity, gender, passion, family history, local needs, or familial expertise will study the same thing delivered in similar ways–very much like a kind of academic cafeteria.

The implied hope in a curriculum delivered to such students (i.e., all of them) in such a fashion (i.e., the ‘grid approach’ explain above) is that it will fit everyone’s need. It is designed to be rational.

And the methods of delivery of such a curriculum (e.g., teachers, classrooms, books, apps, tests, etc.) are also designed to be rational. That is, both the curriculum (what is studied) and the learning and instructional design models (how it is being studied) are designed to be practical: testable, observable, and deliverable to every single student regardless of–well, anything. By design, public education is (intended to be) for all students everywhere no matter what.

But what about thinking? Can critical thinking–wrought and wielded by the thinkers–coexist in a standardized learning environment designed to promote the broadest numbers of students to mastery of the most traditional academic content? Possibly–but that may not be the best way to ask the question.

People race tractors and ride on hot air balloons but that doesn’t mean either are entirely suited to the task. Outside of education, it is in the disparity of function and application that our amusement resides. But within education? Generation after generation of students suffer from the deficit.

What About Critical Thinking?

In ‘What Does Critical Thinking Mean’?, I said:

Critical thinking is among the first causes for change (personal and social) but is a pariah in schools –for no other reason than it conditions the mind to suspect the form and function of everything it sees, including your classroom and everything being taught in it. In critical thinking, the thinking is only a strategy to arrive at informed criticism, which is itself is a starting pointing for understanding one’s self and/or the world around you. While in function it can run parallel to the scientific method, science intends to arrive an unbiased, neutral, and zero-human conclusion. In critical thinking, there is no conclusion; it is constant interaction with changing circumstances and new knowledge that allows for broader vision which allows for new evidence which starts the process over again.

While entirely new forms and methods and reasons to learn will likely eventually disrupt education as it is from the outside, if we’re feeling nostalgic with the old sturdy body of education, we can at least address that deficit of critical thinking by embedding into the architecture of education. This can be accomplished by any number of ways, but some fruit appears to be low-hanging.

2. Create learning models that require critical thinking–learning models that cannot function if students (all students) don’t think critically. (Much like a rowboat where everyone has to row and stops if someone stops rowing; alternatively, break apart the boats completely so every student must row themselves.)

4. Establish cultural practices where critical thinking is valued over popularity. (Democracy might benefit.)

5. Champion teachers as leaders in helping grow children that think for themselves by supporting teachers as professional designers of learning experiences and opportunities.

6. Promote an ongoing dialogue between schools, families, communities, organizations, higher education, members of the local economy, etc., about the necessity and nature of critical thought.

7. Create learning opportunities that benefit from the respective genius of each child, where that child’s gifts and affections are clear and undeniable especially to that student as they see themselves.

We can go on and on and I worry I’m moving too far away from the point: Schools as they are are not ‘designed for’ critical thinking and right now and as a culture (and planet) we are suffering from the ensuing deficit.

This implies we might focus less on the iterative improvement of education and more on education as it might be.

10 Ways To Honor Mistakes In The Learning Process

15 Questions Students Can Ask Themselves When Learning New Content

When introducing students to new content, the right questions and language can help disarm uncertainty and encourage students to develop...

The 4 Cs: A Framework For Improving Math Skills

The Four Cs stand for Converse, Count, Compare, Categorize, each of which are critical to the development of a young...