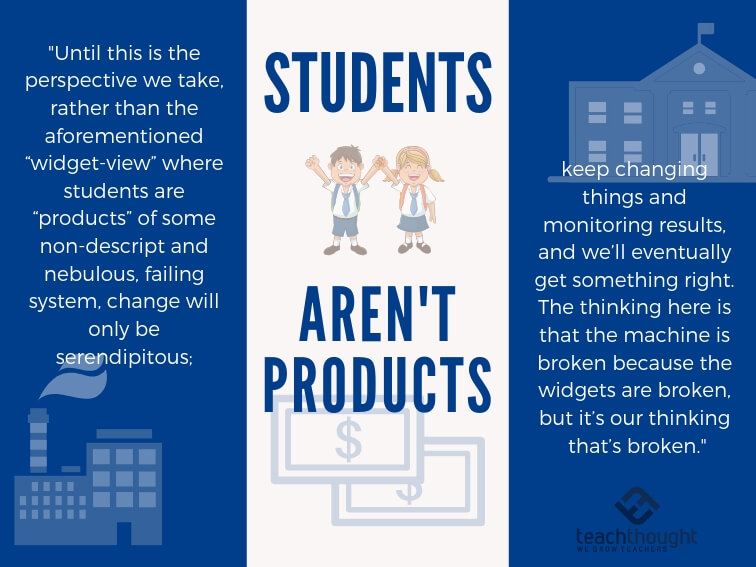 Students Aren’t Products: How We Think About Education

Now almost two decades into the 21st-century, we should have a look around. What you see is 21st-century teaching and learning. This is it.

So where are we? In a bit of a funk, mainly in how we see ourselves and what we ‘do.’ Students, Parents, Teachers, Administrators, Vendors (of everything from curriculum to food and supplies), School Board members, other certified employees, classified employees, community leaders, local business leaders, healthcare providers, local libraries and bookstores—and on and on–all directly and indirectly shape the learning path each child takes.

Of course, that is not to say these products have to be negative. Difference has been a force behind social progress through history, and so after identifying these ‘cogs’ of the ‘machine’ that educates children, and then admitting each cog possesses a belief system, we’re at least beginning to see a fundamental pattern of cause and effect—of affectors and effected (learners).

And this leads us to another flaw in our perspective: learners are not products, educators don’t produce, education isn’t a possession, nor a product or service. It’s all a matter of membership. And we have to guard against seeing it as one–a machine with cogs that produces learners like little widgets—that wheezes and chuffs and spits out educated things. Rather, we have to try to see the entire machine itself as society itself, where the learner has a role that is interdependent with the teacher, the teacher with curriculum vendors, and so on.

If that happens, we might be able to get our bearings again–find out which way is up, what we are, and where all of this is headed. Until this is the perspective we take, rather than the aforementioned ‘widget-view’ where students are ‘products’ of some non-descript and nebulous, failing system, change will only be serendipitous; keep changing things and monitoring results, and we’ll eventually get something right. The thinking here is that the machine is broken because the widgets are broken, but it’s our thinking that’s broken.

The Relationships In Education

The relationships in public education—between student, teacher, administrators, parents, vendors, and extended families—are lateral–indisputably lateral in the grand scheme, and only become hierarchal in terms of individual contexts. In fact, each of the relationships we’ve historically labeled as indeed hierarchal is not only dated evaluations, but purely illusory, and our participation in these illusions is undermining any rethinking or attempted revision of the whole machine.

Superintendents to principals, principals to department heads, department heads to teachers, teachers to students (and somewhere in this, learner parents and families). This top-down view not only blurs things in practice but in theoretical repair as well. We hold on to antiquated ideas about education not because they work, or because we don’t know they’re dated, but because we can’t see the parts themselves.

In fact, this structure is so stuffed full of relics that we don’t see them for what they are—removable, revisable, and replaceable accessories. The only limits here are collectively contrived. Rather than rethinking the structure itself, we try to install new parts—new standards, new assessments, new teacher evaluation models–into a dated infrastructure that subsequently resists simply because it can’t process the change. It’s not built to.

Due to the true lateral nature of societal relationships, education is uncommonly communal. In fact, finding a parallel circumstance is difficult. Business is similar in terms of scope and scale, but has a consuming and cannibalizing ethos, every person for themselves, and all is forgiven under the ‘strictly business’ mantra. If one business fails, this is micro-evolution at work, and the weeding out of the weak makes the shared collective stronger. Business also benefits from a singular mindset: The only leader in business is profit, and all done in the name of that leader is seen as innovation and faultlessly defensible.

Any biases or underlying assumptions business leaders have about money, markets, ethics, and so on all ultimately create an unapologetically honest shrugging of the shoulders in pursuit of profit and growth. Even failure in business is, for all of its spectacle, relatively harmless due to built-in duplicity in our free market system, each collapse creating a void, each void an opportunity for a revised business model. Failure in economics, at least that falling short of recession and depression are engrained in our social fabric. Going out of business sales are seen as a chance for a good deal.

Education is, of course, different, where failure is tragic. An immediate problem is that, unlike businesses that can always point to the mother of all bottom lines, profit, education lacks such a simple barometer. We, as a nation, cannot agree on what it means to successfully educate a child, only that whatever criteria we could surmise would likely verify our collective failure.

This is a point that cannot be overstated. While common academic standards are a step towards homogenizing and aligning what is done state by state, thus allowing for the potential of a common measurement for success, one of the very few clear truths is that the traditional multiple-choice and short answer standardized testing model is woefully inadequate at measuring learning. Comparing again our national pastimes of free enterprise, public education, and even civil rights (forget baseball), while American business thrives on brand, our public education lacks it, and this may be more damaging than it’d seem.

As a nation we love brand, and due to its ubiquity we are culturally accustomed to its use and application. It clarifies, oversells, connects, and soothes. We come to expect and even require it, using it to evaluate with and without thought. What the concept of brand offers is commonness–a socially agreed contract in terms of visuals, value-system, history, and other requisite identities that foster evaluation, thus (hopefully) moving us all to the same page.

Brand gives us each a common UPS, a common Ford to discuss, patronize, and idea exchange about. Consider the pink-hued face of breast cancer, and its effect on how we see it, support it, and talk about it with friends and family. Brand gives us some sort of common ground–and our system of public education lacks one.

One could further argue that it is not so much that we lack brand, but that we lack the common vision that spurs the natural creation, or ‘letting’ of such a brand. The fact that one has not emerged, in an institution so inextricably woven into our collective national identity, speaks for itself. In public education, leadership is weak and fragmented, lacking awareness of both interdependence and introspection.

The underlying assumptions a teacher has about the role of formative assessment or the potential of the extended family in a learner’s education can soundlessly collide with what that learner believes. Of course, that learner will often possess assumptions and a value system closer to what parents and family members may perceive, but this family is going to be (at least) two steps removed from the curriculum vendors, and so on in some nutty concept map of failure.

And so public education whirrs on without an identity, brand, or clear purpose; it continues to try to reinvent itself without leadership—personal, curricular, or structural—much less any useful degree of commonness other than to unanimously admit, at best, the inexcusable mediocrity of our collective machine. How can we improve if we can’t be clear about what we’re supposed to be doing?

Somehow we’ve settled into a damaging, selfish pattern that is characterized by a lack of self-awareness, a dramatized mythology of ed reform (No Child Left Behind, Assessment, Whole Child, Value Added, Schools-as-businesses, Good Teacher/Bad Teacher) and, perhaps worst of all, a fundamental misunderstanding that public education ‘produces’ a product.

That is the most fundamental idea in public education–the infinite interdependence of living that scrutiny of policy, schools, or curriculum misses entirely.

There is no product, only a collective we.