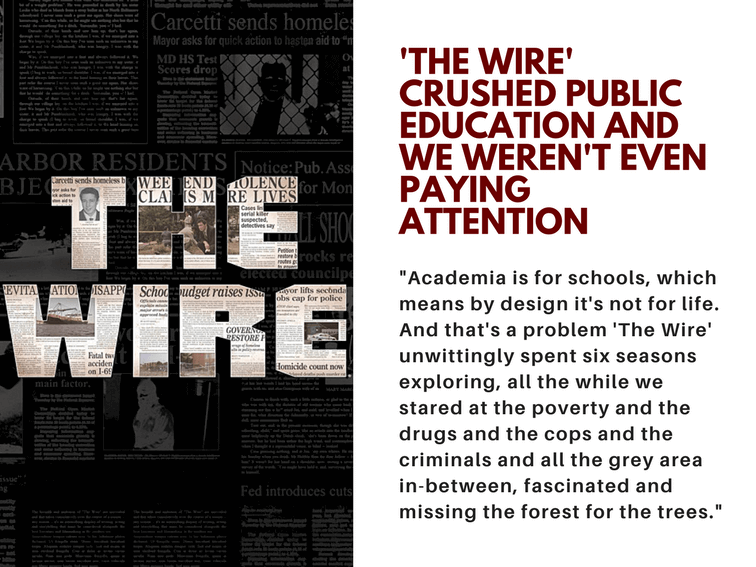 You might not have heard of ‘The Wire,’ and that’s unfortunate.

‘The Wire,’ the extraordinary and criminally-overlooked HBO series that ran for five seasons between 2002 and 2008, covered a lot of ground in terms of thematic material, from drugs and housing projects and police brutality to families and race and the socioeconomic reality faced by scores of ‘inner cities’ across the United States.

And it crushed public education, too.

The timing of ‘The Wire’ plays a role both for its success and relative obscurity.

Television in the early 2000s was not only pre-Netflix, but cable series, in particular, were mostly overshadowed by ‘The Sopranos,’ the legendary mafia-meets-reflective-psychoanalysis by creator David Chase. Both ‘The Wire’ (TW) and ‘The Sopranos’ were early members of the shift away from network television towards cable, and eventually to Netflix.

(HBO has always played a big part here, with ‘Oz’, ‘Curb Your Enthusiasm,’ ‘Deadwood’ and others preceding the success of more recent series like ‘Game of Thrones,’ as well as AMC’s ‘Breaking Bad,’ a series about a high school chemistry teacher doing a modern interpretation of ‘Scarface.’)

The emergence of quality cable series being on cable meant that new themes and tones and visuals were suddenly available that would never have worked on CBS or NBC, where Law & Order is considered pushing the envelope. But limited to single channels part of expensive cable packages also meant a lot of people never saw the series. In a Netflix binge-friendly culture, a show like ‘The Wire’ would’ve had a much greater chance to find traction.

What does any of this have to do with public education?

In 2005, series creator and Director David Simon described the series as “a meditation on the death of work and the betrayal of the American working class … it is a deliberate argument that unencumbered capitalism is not a substitute for social policy; that on its own, without a social compact, raw capitalism is destined to serve the few at the expense of the many.”

Classrooms of the Baltimore public school system are a frequent setting for episodes, and are portrayed in the series gritty, ‘dark’ (realistic?) tone that would become its signature, a frame to view other cultural mechanisms and settings, from public housing to the ‘war on drugs’ to the timeless theme of the human struggle to overcome adversity.

Simon’s background in journalism is on clear display in every episode, each which seeks to extract the human-condition narratives that exist rather than creating them out of thin air (the practice of which is awkward if you think about, like baking loaves of bread in the middle of an infinitely-stocked bakery).

The Ringer recently took at look at TW’s impact on education, with plenty of commentary of people in and around the project. An excerpt:

‘Fifteen years after creator David Simon’s opus premiered on HBO on June 2, 2002, it remains an unmatched portrayal of the inner workings of an American city in decline. The Wire slices deeply into Baltimore’s decaying public institutions. “It is perhaps the only storytelling on television,” Simon told The New Yorker a decade ago, “that overtly suggests that our political and economic and social constructs are no longer viable, that our leadership has failed us relentlessly, and that no, we are not going to be all right.” Through the eyes of a diverse ensemble of police officers, drug dealers, politicians, and citizens, the audience sees how these failures affect a majority African-American community.’

Last year, PBS took a look at how ‘The Wire’ could be used in the classroom as a teaching tool, specifically how it can inspire the design of curricula that is authentic (if one considers the series authentic, which one should), which invites teachers to consider not simply a ‘class’ or ‘ability levels,’ or even race (which would be racist), but that child in that neighborhood with that experience–what Wendell Berry calls ‘place’ and what I’ve written about as often as I am able–in ‘Why Students Don’t Remember What You Teach,’ for example.

In The Ringer’s article, a quote stands out: “If you have a lesson plan and it fails and you blame yourself, you’re on the road to becoming a good teacher,” Burns said. “If you blame the kids, you should find another job. And what Prez did was say, ‘Why did I fail? Why didn’t I reach them?’”

This isn’t necessarily a new idea for teachers. Over a decade ago, education began to shift from a focus on teaching to a focus on learning. It no longer matters if you taught it–or worse, ‘went over it’–but rather what students took away from the teaching.

This continues to be a challenge, even in an era of data teams and professional learning communities. Schools are driven by curriculum and testing of the mastery of that curriculum, and things can’t get much more esoteric than that. Determining what it means to be ‘proficient,’ and how to measure that is only the beginning of the problem. We also have to consider the value of the curriculum itself.

If children are indeed proficient and still eke out unhappy, paycheck-to-paycheck existences, maybe we should take a look at what they’re learning; maybe they (the children) ‘get’ more than they let on, but because of the dubious value of highly-academic content to any human being alive–much less impoverished children in the inner city whose role models are barely surviving themselves–they don’t have much cause or opportunity to practice or transfer those skills and understandings.

Forget about whether or not they’re engaged or even ‘care’; do they need this knowledge to live well and love well and work well in places they care about? If not, as an industry we’re guilty of a kind of professional and collective malpractice, no worse than a field of doctors that recommend that their patients clap for exercise or dentists that tell their patients that if they avoid sugar and black coffee, they can expect strong oral health.

So a television series set in crumbling projects, where your day to day existence is in question and the legitimate threats to long-term health and happiness are so pervasive that it’s difficult to pick a ‘conflict’ the ‘characters’ are overcoming–that television series is saying, loudly, that major cultural systems and mechanisms are failing, and public education, as a system, has to be seen near the top of that list.

Our existing response has been at worst to close the ‘bad schools,’ and at best to fine-tune the teaching, all the while never looking over the shoulders of the students and the reality of their existence and asking ourselves, ‘What does this child in this place need to know and have the tendency to do?’ Good teachers do this–part counselor, part coach, part social worker. This, though, is in lieu of professional standards rather than because of them, which is downright unstainable for the majority, and absurd from any viewpoint or perspective but those academic.

Academia is for schools, which means by design it’s not for life. And that’s a problem ‘The Wire’ unwittingly spent six seasons exploring, all the while we stared at the poverty and the drugs and the cops and the criminals and all the grey area in-between, fascinated and missing the forest for the trees.