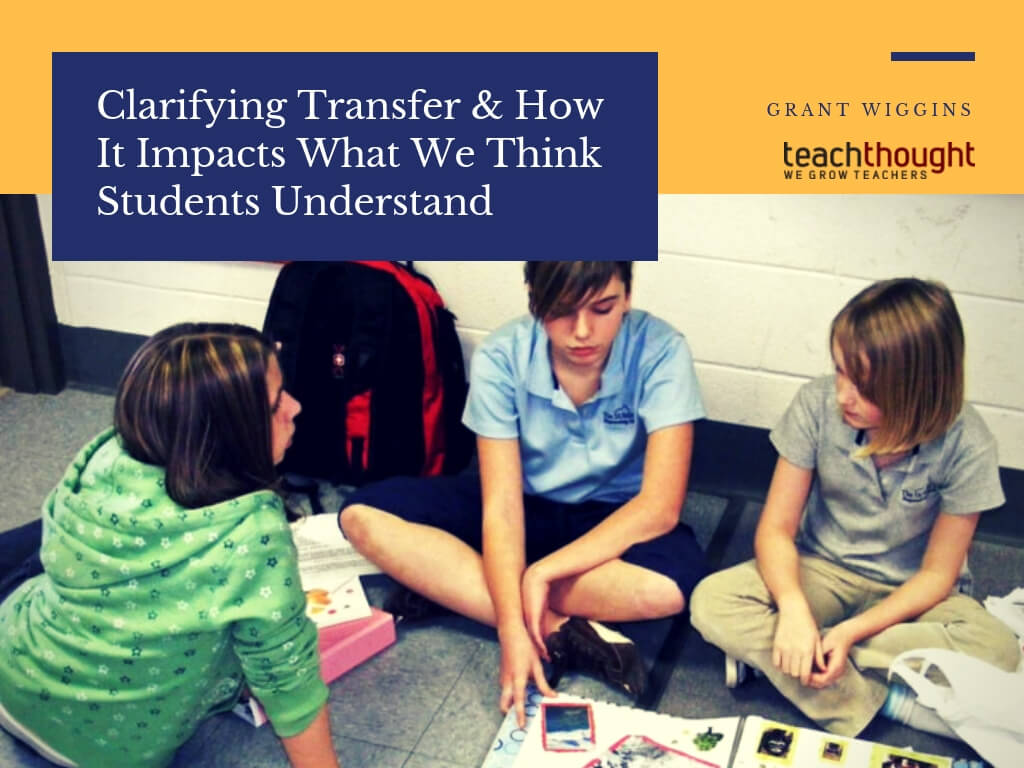 Preface: In collaboration with Grant Wiggins of Understanding by Design and Authentic Education, TeachThought will be bringing you Grant’s industry-leading expertise on understanding, learning frameworks, and curriculum planning. This article originally appeared on Grant’s personal blog.

There is some understandable confusion about the goal of transfer.

When we say we want students to be able to “transfer” their learning, there are two possible meanings to our aim. We might mean that transfer involves a high-level ability that is thus somehow different content from low-level content. Or we could mean that for the same content that can be different learning goals – merely knowing it vs. being able to transfer it (where the “it” signifies that we are talking about the same content). It is the latter sense that informs UbD, yet many educators seem to think that transfer is its own special content. They often say to us in trainings: well, this is the content I want them to learn, so any transfer goal would be different content, right?

The confusion occurs, in part, because of the contrasting examples we tend to use. Game vs. drilled skill, complex performance vs. simple item, higher-order vs. lower-order, etc. But this then easily causes confusion about what we mean by varied goals in Stage 1. For the same “content” there can be and often are different kinds of learning goals. Sometimes I’m happy for you to merely know something. At other times, with the same content, I don’t want you to “merely” know it but to “understand” it. In this way, we are revisiting the same ground as Bloom’s Taxonomy: many different goals for the same content.

Here is an example. Suppose I say my goal as a math teacher is that you “know” the Pythagorean Theorem. Strictly speaking, then, all I am saying is that I want you to recognize it when you see or hear it mentioned and I want you to recall the formula and its most basic meaning. Thus, test items for “mere” knowing might ask any variant of the following questions:

None of these questions requires transfer of prior learning. All that is required is accurate recall and the most simple inference and plug-and-chug based on that recall. “But, wait! Then ‘know’ wasn’t really my goal. I mis-spoke, then. I really want them to be able to apply it…”  Aha – different goal, same content.

An Example From Mathematics

Let’s ponder the specifics of a transfer goal for the Pythagorean Theorem. Here, for example, is such a goal statement, from the Common Core 8th grade Math Standards:

What is not stated but clearly implied by the terms “understand” and “apply” is that the student can not just recall the Theorem when prompted to do so to be judged as understanding it – that would be just ‘knowing it – but must realize when the Theorem is relevant, why it makes sense, and be able touse it appropriately to solve a problem otherwise not clearly marked as a Pythagorean Theorem problem.

If you mistakenly think of transfer as a higher-level complex ability somehow different from discrete content knowledge, you then tend to also mistakenly think that only complex performance tasks test for transfer. But this is clearly false, as the following two test items show:

In both examples students are expected – on their own! – to realize which specific prior learning is called for and apply it.  What makes it a transfer task, in other words, is that nowhere, in either problem, is the phrase “Pythagorean” used in the text.

Students are typically required to make four different cognitive moves to transfer learning successfully: 1) independently realize what the question is asking and think about which answers/approaches make sense here; 2) infer the most relevant prior learning from plausible alternatives; 3) try out an approach, making adjustments as needed given the context or wording; and 4) adapt their answer, perhaps, in the face of a somewhat novel or odd setting (e.g. if the unit of analysis demands rounding or simplifying the result, though this is not needed in these two examples.)

It should not surprise us, then, that a large majority of students do poorly on such items. The 1st item was constructed response and only 27% of Florida 10th graders got the answer right. The 2nd item, from a past 8th grade Ohio state test, had only 48% of 8th graders getting the right answer on a selected-response question.

Similarly in ELA. Every reading passage question that requires comprehension is a transfer task because the student is required to do the same four mental steps (especially since, by design, the reading passage is unfamiliar.) The student must first determine if the question requires mere finding or inference, then determine which prior learning – main idea? Character development? – applies, test out their answer, and adapt their somewhat general or formulaic view of the content to this particular passage and prompt.

So, “content” can involve merely acquisition goals or both acquisition and transfer goals. It all depends upon our goals for learning that content.

And vice versa: just because students are asked to do a complex performance does not mean that any real transfer is demanded. If the task is completely scripted by a teacher – say, memorizing a poem, performing a Chopin Prelude that one has practiced many times, with coaching, or writing a formulaic 5-paragraph essay – then there is no transfer of learning taking place. Transfer only is demanded and elicited when there is some element of novelty in the task and thus strategic thought and judgment is required by the performer.

The Language of Meaning

The same argument holds for Meaning.

Meaning is not different content, it is a different goal than Knowledge with the same content. I might want you to “explain” what you “know,” not just “know” it, for example. This is just how the Common Core Math Standards describe the difference between knowledge and understanding. As the Math Standard we looked at earlier says, students who understand the Theorem “can explain why the Pythagorean Theorem holds, for example, by decomposing a square in two different ways…”

In the introduction to the Math Common Core they generalize on the nature of mathematical understanding:

“One hallmark of mathematical understanding is the ability to justify, in a way appropriate to the student’s mathematical maturity, why a particular mathematical statement is true or where a mathematical rule comes from.”

Let’s recall the full standard, to see how “understand” and “application” are thus two separate goals for the content, above and beyond mere plug-and-chug recall and use:

If you only can recall and state something you don’t really understand it. You have to be able to explain and justify its meaning and applicability – a Meaning goal – and you also have to be able to apply it into settings where it is needed, without being prompted to do so or shown exactly how to do so – Transfer.