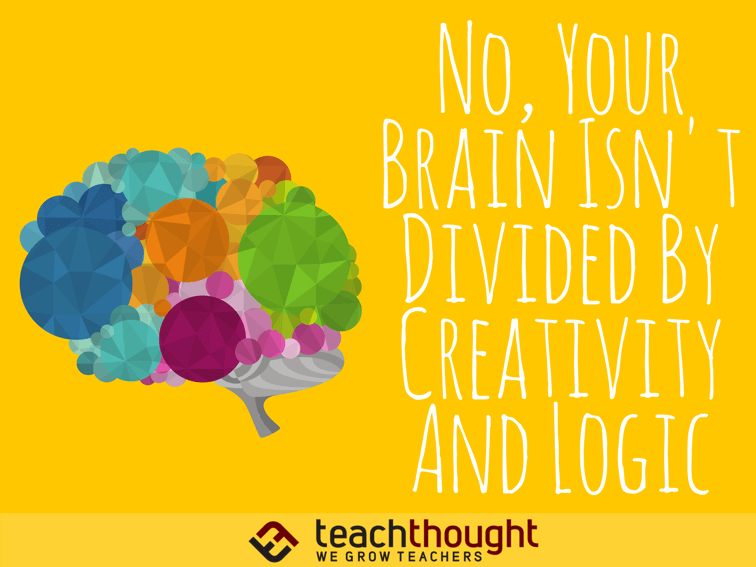 No, Your Brain Isn’t Divided By Creativity And Logic

How the human brain works is a topic of considerable chatter, but not much in-depth discussion outside of neuroscience and psychology.

There is indeed an undercurrent of learning (that should perhaps be an over-current) regarding brain-based learning and research, but very little understanding of what is happening in all those folds of gray matter. Whether you’re studying engagement, curriculum, or the cultural impact of mobile learning, it all starts in the brain.

But in pursuit of more direct study, neuroscience is stepping in, itself is becoming of a pedagogical mainstream artifact as educators stop guessing what might work, and head straight to the brain to figure out how it functions, and how best to leverage its natural inclinations.

The Left Brain vs Right Brain Division Is Bunk

One notion of neurology that has worked its way into popular culture is the idea that the brain is divided cognitively. Anatomically, of course, it is halved into two hemispheres each about the size of your fist. It is is composed around 100 billion neurons (nerve cells) and it is true that the right side of your brain controls the left side of your body and vice-versa.

German healthcare institute IQWiG explains more about the division in the brain.

The left cerebral cortex is responsible for speech and language. The right cerebral cortex supplies spatial information, such as where your foot is at the moment. The thalamus provides the cerebrum with sensory information from the skin, eyes and ears, as well as other information. The hypothalamus regulates hunger, thirst and sleep. Together with the pituitary gland, it also regulates the hormones in your body. [1]’

But according to psychiatrist, author, and Oxford scholar Iain McGilchrist, what isn’t true is that the brain is divided into logical and creative portions, but rather part and whole portions.

In the following TED Talk, McGilchrist argues that the role of the brain is to make connections, essentially in support of cleverly manipulating the world around us. He goes on to argue that this division is not trivial, but rather has shaped Western culture for thousands of years.

No, Your Brain Isn’t Divided By Creativity And Logic