Two myths I continue to see more and more of over the last couple of years involve learning styles and Depth of Knowledge frameworks.

The growing consensus seems to be that each has been ‘proven wrong,’ and I’m not sure where this misunderstanding started but when I saw MindShift (a site I’m a huge fan of) share an edweek post recently about this idea, I felt compelled to at least talk about it.

(To be clear, by ‘learning styles’ I’m referring to the idea that there are ‘multiple intelligences’ [as opposed to one broad ‘intelligence’ like being ‘smart’] such as verbal and kinesthetic, and that some students are stronger in some of these areas and weaker in others.)

The Recent Perception Of Multiple Intelligences In The Classroom

Learning styles aren’t only ineffectual — they can have real consequences for students. Categorizing students by their perceived or self-reported strengths could discourage them from seeking new challenges @educationweek https://t.co/8ENltscyOL #edchat #parents

In 2011, Edweek shared a post questioning the effectiveness of learning styles. In the post, they cite an NPR study (which is then, I suppose, being cited by MindShift in referencing the first and second edweek post which I am now referencing; it all brings to mind how little new thinking and ideas often emerge in the echo chamber of the modern internet [of which TeachThought is a part] that says the there’s little to no evidence that learning styles ‘work’:

“We have not found evidence from a randomized control trial supporting any of these,” says Doug Rohrer, a psychologist at the University of South Florida.

In ‘What Works In Education And How Do We Know?“, I tried to chip away at this idea of measuring effectiveness.

How Do We Decide What’s ‘Ineffectual’?

What I was trying to do (and am not sure I did very well) was question how we decide what works. Let’s say, for example, a study is released that says “iPads are shown to be ineffective,’ or ‘Group discussion increases student performance by 23%.’ My first response for each would be to wonder how effectiveness and performance were defined and measured.

If we want to say that something works, we need to first decide what it was supposed to do to begin with and oftentimes that purpose is either assessment-based (i.e., it ‘works’ because test scores went up) or is only loosely connected to education’s goals to begin with.

Should we say a group discussion strategy ‘works’ because students are 23% more likely to participate in a discussion? Or their overall letter grades for any course with four or more scheduled discussions went up one full letter grade?

Or should we say it works because ‘data shows’ students stay in school, live fuller lives, and do better work that results in a better world? This is an important distinction.

I know, this can get esoteric and rhetorical fast and seems beyond the reach and realm of education as we know it. (And maybe that’s part of the problem.) I’m only suggesting that we be clear in our collective vision of knowing something ‘works’ when we see it.

If we’re all going to say a car is ‘affordable,’ isn’t that relative enough of a term that we should have some kind common schema and sense of what that means that’s true for the people for whom that concept of affordability actually matters? If we’re going to call a restaurant ‘clean’ or a book ‘credible’ or a washing machine ‘a good value,’ shouldn’t we have some kind of shared sense of and terms for what these words mean?

And so when we say that ‘learning styles’ are ‘ineffectual’, we’re saying that different learning methods and ‘spaces’ don’t impact learning ‘results’ in any meaningful way worth understanding and using as educators.

And further, we’re saying that the differences between and across students aren’t remarkable enough to understand and use as educators. That seems silly.

But maybe something is being missed. 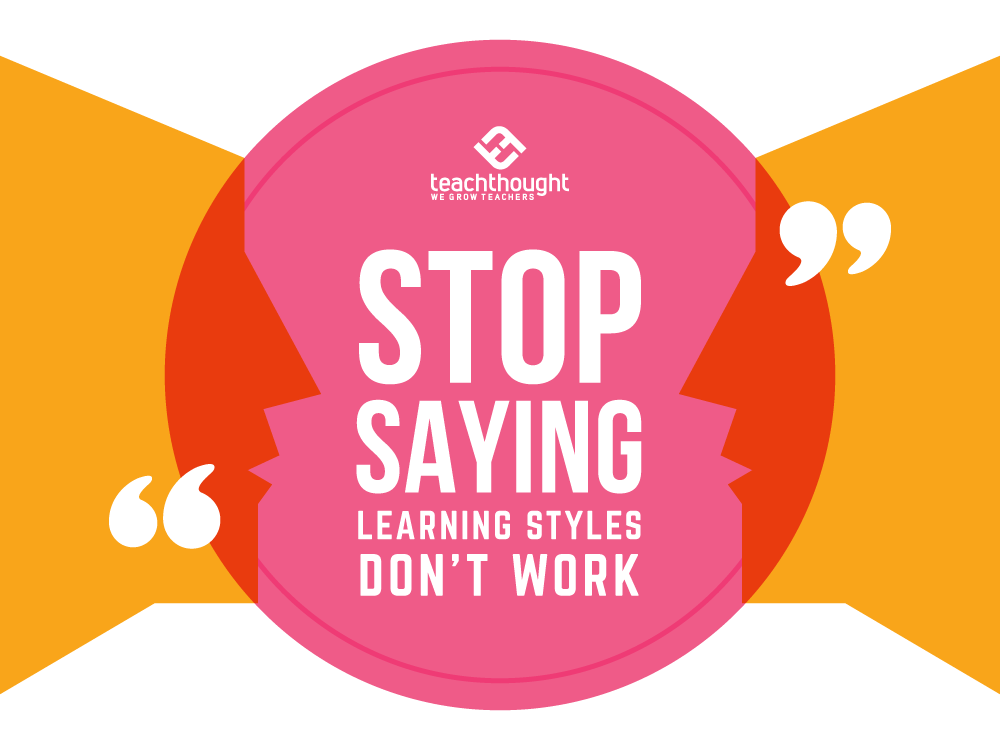 From the EdWeek article: “The fact that we didn’t find an agreement shows that assigning learning styles to students is more or less a hit or miss process,” Marietta Papadatou-Pastou, a lecturer in neuropsychology at the National and Kapodistrian University of Athens, and the lead author of the study, said in an interview. The mismatch highlights this framework’s unreliability, she said (bold emphasis my own).

And there it is: ‘Assigning learning styles’ is ‘hit or miss.’ Okay, then don’t ‘assign’ a ‘style.’ Do teachers do this? Maybe, but I’ve never spoken to one and I have trouble imagining that this was a widespread myth worth debunking.

Who and what are we saving, here?

Whenever I’ve created learning profiles with students (key word, with), I was careful to help them see that learning styles were a kind of overlap between academia and personality. We could learn, as a class, about literary symbolism verbally, or through music individually. We could learn through introspection or dialogue. We could combine the two or more categories–verbally and interpersonal or music and kinesthetic, for example. This seems like common sense. Why do we want to ‘disprove’ this?

The same can be said of Danielson’s Depth of Knowledge’ framework that has been ‘disproven.’ Or when I’m criticized for sharing ‘the old Bloom’s Taxonomy model.’ I guess the idea is that the old one doesn’t work?

The Tone Of Critical Thinking

There’s absolutely zero chance that a framework for thinking can be ‘disproven’ unless it’s just an absolute mess. It could be that we’re expecting the wrong things from it or are using it wrong, but suggesting that the entire thing is ‘bad’ is a bold statement and can only be made with the full context of education in mind.

There are thousands of learning models, theories, and frameworks. Same with economic and political theories. Sports, too–different offensive and defensive approaches. No one tries to ‘disprove’ the zone defense in college basketball. They consider it for what it is: an approach with pros and cons and strengths and liabilities that serves certain athletes well and others less so.

Why can’t we use this tone to increase our collective literacy about how people learn? To be playful and creative with pedagogy? For some reason, education has a fascination with disproving things, as if we’re ridding our collective landscape of ‘bad ideas.’ I’m all for that, by the way—provided we’re also scrutinizing the implementation of the idea to make sure that’s not the issue while scrutinizing our expectations and metrics for it as well.

Do ‘learning styles’ make test scores go up? Maybe not. Do they help students ‘retain information’? I have no idea. It probably depends. Can they be useful to help teachers think about activity planning to engage ‘the whole child’? Of course they can.

Maybe this is a result of the push to be research-based and data-driven. What would the data say about white female folk/soul singers? Yet it gave us Janis Joplin. I wonder what the track record for your favorite political ideology is? Do parks ‘work’ in cities? Are they ‘worth’ our time and investment? How do we know?

I’m not arguing for exceptions, I’m arguing for common sense and critical thinking about the full picture of learning. That there are different ways to learn and some people may prefer/be more comfortable with–and thus be more successful using–one approach over another is likely not worth our time debating.

Instead, let’s return to design thinking about learning and all of its parts–where we consider the whole and are imaginative and creative with the parts in pursuit.