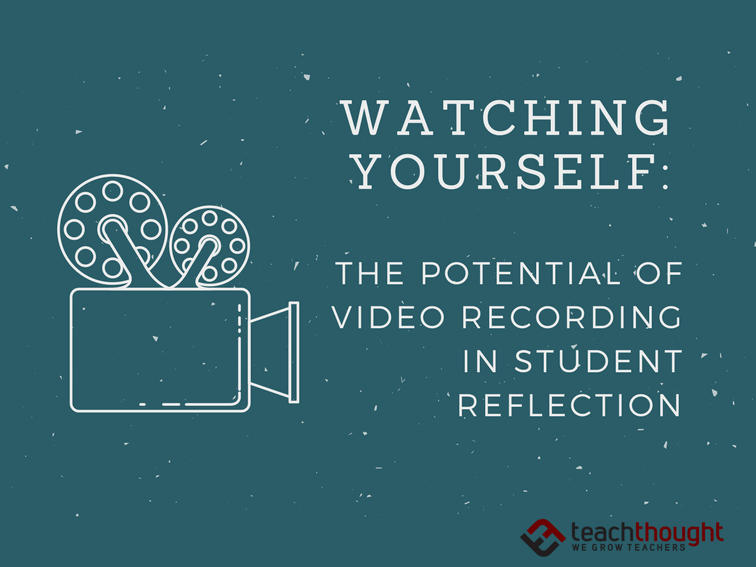 Watching Yourself: The Potential Of Video Recording In Student Reflection

In my freshman composition courses, I had regular one-on-one meetings with students throughout the term, scheduled at crucial points during writing projects.

Well before the final deadline of a research paper, I would ask students to send me a draft so we could meet and discuss their progress, their challenges, and their goals. First, I would always ask students to describe their project aloud to me.

Their responses could include their initial interest in the topic, their writing and research processes, the sources they’ve included, and any conclusions they’ve begun to make. Almost always, students would provide essential information setting up their topic and a line of questioning that translated much clearer than their written draft.

Often I’d say, “Write that down—exactly what you just said.” These moments of affirmation tended to inspire confidence in even the most reserved students.

The Disconnect Between Feedback & Revision

The disparity between students’ ability to speak and their ability to write was a shock to me at first. As I saw this pattern emerge, again and again the ‘tell me about your project’ portion of our meetings became a crucial part of the process. Though the problem with having students describe their projects aloud was that they didn’t have time to transcribe the things they were saying. And if they tried to do this, writing would have interrupted the flow of ideas.

I would ask students to take notes about how they could begin the next steps to improve their paper, and I would also generate a list of suggestions. However, the natural rhythm of their spoken language and the uninhibited flow of ideas would disappear later, when they’d return to the computer screen and their draft.

Any ‘aha’ moments would be gone.

It wouldn’t be feasible for me to sit with each student during their writing process to allow them to talk out their ideas, record and incorporate them into their draft, then move on to the next issue. Though I could see a solution that provides a version of this sort of interaction.

As technology becomes more accessible to students and teachers, learner-generated videos have become a substantial tool for empowering students, invigorating stale educational methods, and reinforcing content retention. In a composition classroom, videos could serve as a way to help students express themselves in a more natural language than the tone they would use to construct written ideas.

Even in early written brainstorming sessions, the ability to erase and rephrase ideas can easily bog down efforts to approach a writing project.

Similar to the conversations in my one-on-one meetings with students, recording reflections and brainstorming sessions in video form could inspire confidence in students who struggle to organize their thoughts or find their voice when they sit down to write.

Afterward, the ideas are safely stored in a video the student can revisit as many times as needed. To offer a more specific direction, instructors could provide a written guide of questions for each video.

In a study of 9th graders at a STEM summer camp, Rose, Sierschynski, and Björling found that students who recorded videos of brief, guided reflections at various points during the camp were able to acknowledge and articulate the progress they made over a three-week period. Their ability to revisit past ‘versions’ of themselves and their struggles allowed students to better understand their specific path to success and improved their confidence regarding STEM topics.

If applied to a composition course, this process could help students to acknowledge their progress over a term as well as identify a model for overcoming future challenges related to writing. Here is a basic outline of what this process might look like for a writing assignment.

1. After giving students ample time to review the assignment prompt, ask each student to record a short video including their initial thoughts, their experiences with similar assignments, any foreseeable challenges they might face, and any initial ideas they have.


2. Once students submit their first drafts of this assignment, ask them to review the first video and record another in which they respond to their initial ideas as well as update their progress, express any new challenges, and describe any accomplishments.


3. After receiving feedback about their first draft, ask students to review the previous video and record a new one based on the instructor’s feedback. They should also outline a direction for improving their draft.


4. After submitting their final draft, ask students to record their reactions to finishing the assignment.


5. Once the students have received a final grade and feedback, have them review all past videos for this assignment sequence and record a final video acknowledging their progress overall. You might ask what they would do differently if they could begin again as well as what they have learned that will help them in future writing situations.


In the STEM camp study, the videos were made available to all students so they could learn from each other as well as reflect on their own progress. This adds a social element that could motivate students to take the process more seriously.

Videoing skill-based performances in sports has been used for years. Coaches can revisit plays, techniques, and movements with players, asking them to revisit their own thinking at key moments and how that thinking can be revised for future improvement. The players, too, benefit from seeing themselves ‘outside themselves’ as they perform.

In a writing context, this level of peer-observation and peer teaching could circulate student insights and provide a variety of models for approaching challenges in their own work throughout the project.

Of course, the ability to take snapshots of student progress and their perceptions of themselves, the assignment, and the instruction will be useful in adapting the course for future groups. And though my background is in composition, this could apply to a variety of subjects in order to benefit students and instructors alike.