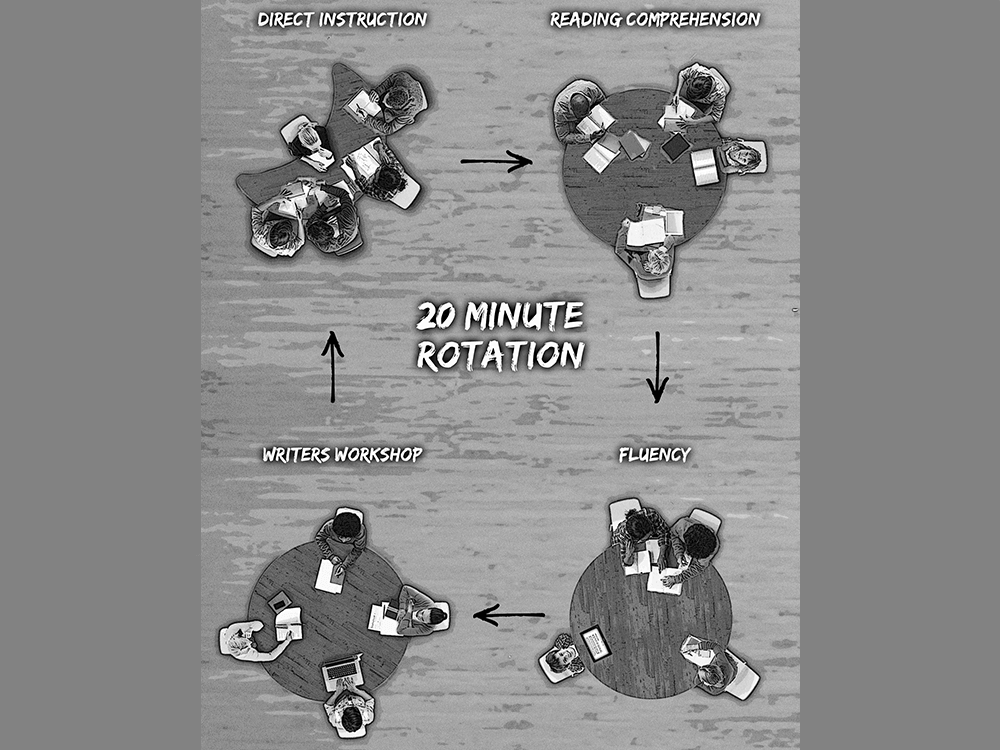 4 Strategies For Implementing Learning Stations In Your Classroom

by Dan Henderson, Author of That’s Special: A Survival Guide To Teaching

What is a center or station? Desks or tables are grouped according to a particular skill or participants academic level in a group. Each group or table is differentiated to meet the learner where they are at academically. Here are a few tips for creating centers or stations.

After the first four to six weeks of school, you should have some diagnostic data on where your children are academically. Maybe you are further along in the year, but you need to place your groups in similar academic levels via the beginning of year formal assessments data. The idea is each academic group comes to the teacher in groups of four to six students for direct instruction. In the other centers, activities are planned out for groups to do independent work.

Differentiate the work in your centers and stations

Take each station and think of it as a common core or state standard. Make levels of difficulty A-D of each standard for your groups and neatly organize your packets A-D. “A” being the foundational skill and “D” being mastery. You can come up with your own system, but there need to be levels of increasing comprehension they can access independently. Sometimes it’s best to have different levels of learners in a center around the same activity. The more advanced children can help the students that are struggling on their A or B level packets. The key is the center is differentiation for all learners at the table for each learner at their level.

Managing the flow of movement

Model, model, model how the flow of movement will look like going from center to center. Get a timer, live by it. Expect 100% participation and do not let any kid slow down the movements of the group.

How to re-evaluate your groups

Students will inevitably advance to more difficult levels towards mastery. Each Friday I do a quick exit quiz to see if a student should advance to a harder level. Then I write on the board the updated list of who can participate in what independent activity at a center. If you want to keep this information private you can have students carry around folders indicating their level. However, giving students access to all levels is not harmful. In fact, many argue that this access to levels A-D or all levels in a center is necessary for a child to advance at the speed they are learning.

A Story From My Classroom

A game played by aging senior citizens and in your child’s elementary classroom. There has been increasing scientific support stating children need to experience joy in order to learn. With joy comes retention of knowledge and the chemicals in our brain want to trigger that reward response again. Viewing kids play games inside a classroom can either resemble a precision portrait or modern art. The modern art visual being a seating arrangement designed by Picasso. If there is a game in the classroom while students learn does it matter? I let a student who loved to win play games at centers, but he would not lose gracefully. Would we all be experiencing joy when Tyrell lost bingo?

As adults, we often try to tell kids that winning does not always matter. Situations of small fights or small disputes on the playground are easily forgotten as we grow older. In the moment, telling a child a game is not important is not the best strategy. It would be better to acknowledge the child’s feelings before trying to give them advice. After acknowledging their feelings give them two choices. Children often get stuck in a feeling and do not consider the alternatives. This is how I set up centers and stations to play bingo in my classroom.

I had set up my stations around the classroom in groups of five desks. After 20 minutes the students would rotate to another group of five desks. At each center, there were different activities. I had bags labeled A-D at each desk. On the board, there were names that corresponded to the letter each child was in at the corresponding center. For example, during our math rotation students were working on fractions. Some students were on a level D and some on a C in a group of five desks. Each child can play a game with someone at their level or by themselves. In the end, the idea is that kids are having fun playing the game while learning.

Tyrell and Ben were in the same group playing fraction bingo. The goal was to add fractions to your card. For example, in a square it would list 1/8 + 3/8. Then someone would pick a separate set of equations from a stack. You had to solve the equation on your bingo card once someone called out the fraction. If someone called out 4/8 or 1/2 you would mark your square. Then all the normal rules of bingo applied. Ben had a successful streak of bingo’s this week, yelling loudly to announce his victory.

“I don’t suck I won last week. You just got lucky.” Tyrell yells back.

“Nah you suck bro.” All eyes in the classroom turn on Tyrell and Ben.

“Shut up.” Tyrell picks his game board and throws it at Ben scattering plastic chips all over the room.

“Hey, stop throwing the game.” I yell from across the room. Tyrell stands up making a fist aggressively over his chair. I get upset and stand to see the potential fight.

“If you don’t sit down you will never play bingo again.” In the moment, the words felt righteous, but shouldn’t I help Tryrell through this situation by offering him a choice, so he could reason with his feelings? I do not make it a priority and separate the two bingo bandits. I move about my day rotating kids through centers.

The next day I tell the children to rotate to their next center and warn Tyrell and Ben about their previous bingo shenanigans.

“If you lose today Tyrell, it’s no big deal. Just say good job.” This Leave-It-To-Beaver advice bounced off his ears like telling teenagers to eat one plate of food at the all you can eat Chinese buffet. You will regret it later, but at the time that General Tso’s chicken tastes so good. The same pleasure receptors are going off in the child brain. Winning is good, winning is all I care about.

“Listen don’t be a baby about it. Baby.”

“You such an *sshole.” Tyrell yells.

The whole class goes. “Ohhh” We enjoy an awkward few seconds of silence. I ring my bell to silence the classroom. Worried eyes look in my direction and the plastic pen I hold is unnaturally bending. I spent all this time creating games and they fight over bingo. B12 you said, what a coincidence. That is the same classroom for your detention.

“That’s it. Ben and Tyrell no more bingo. You are not playing this game again.”

“What what!” Tyrell starts breathing heavily, his chance at bingo redemption, the holy trinity of horizontal and diagonal lines is suddenly dashed. Would Tyrell’s quest to greatness be ousted by this tyrant teacher? Tyrell face grows defiant.

“Haha I guess you will always be a loser.” Ben points triumphantly.

“Ahhh.” With a quick sprint, Tyrell scatters the game on the floor. Then finds a crayon box, breaking 1-2 crayons at a time and throwing them against the wall. Books start flying off the shelf. I sigh. Then wonder, did I remember to switch to Geico?

“Tyrell, Tyrell, calm down, calm down. We do not always get our way or win.” I say urgently.

“You got your way, I can’t play bingo. It’s not fair I just want to play again. I want to play again.” Tyrell is literally screaming the solution at me. By taking away his joy and his opportunity at redemption, I took away his motivation to behave. Was bingo so bad or was it just how Tyrell responded to losing. Yes, you need to give consequences, but was this the best consequence. The point is to teach our children how to respond to losing, correct?

I start off by acknowledging his feelings and then offer a choice. “I know losing is hard. You must be really tired of losing.” He slows down breaking crayons. The magenta is spared.

“Alright, Tyrell you have a choice. You can continue to make a mess that will ultimately lead to you seeing the principal or you could stop, clean up the mess and have a conference with me on how you will play bingo again.” He holds up the Jitterbug Jade still breathing heavily. It was 128 crayon set people, I did not name these colors! Think of the Jade! I try to telepathically relay to spare my crayon box set.

He slowly puts down the Crayola. “Fine, I will have a conference with you.” Tyrell says relaxing his shoulders. I breathe deeply but lower my voice.

“Clean up this mess and class get back to work.” Students slowly move to start their work back up again.

I call a conference with Tyrell to talk through a new strategy of losing. We come up with some immediate strategies like forecasting if he would lose to ward off a tantrum or picking other partners other than Ben. Then we model Tyrell losing again and I asked him what he would say, he said. “Let’s play again–and good game.” To some degree, I think he was just saying the words teachers want to hear.

“You can try playing again tomorrow, but not with Ben.”

“He is a jerk right.” He says, deadpanned.

“There will always be jerks you play against, but what matters is that you don’t let jerks mock or tease you. That’s how you really lose.” Tyrell nods as I give this sage advice.

“So I can tell everyone you think he is a jerk.” Oh, the joy of what kids find important for their teachers to acknowledge.

Centers and stations work to help differentiate group work, but don’t be discouraged if you have a few bingo bullies.

If you enjoyed these teaching mishaps and want to read similar stories visit my blog at http://danhendersonthatsspecial.blogspot.com. You can find out more about Dan’s book at That’s Special: A Survival Guide To Teaching or go on Dan’s website on thatspecial.co