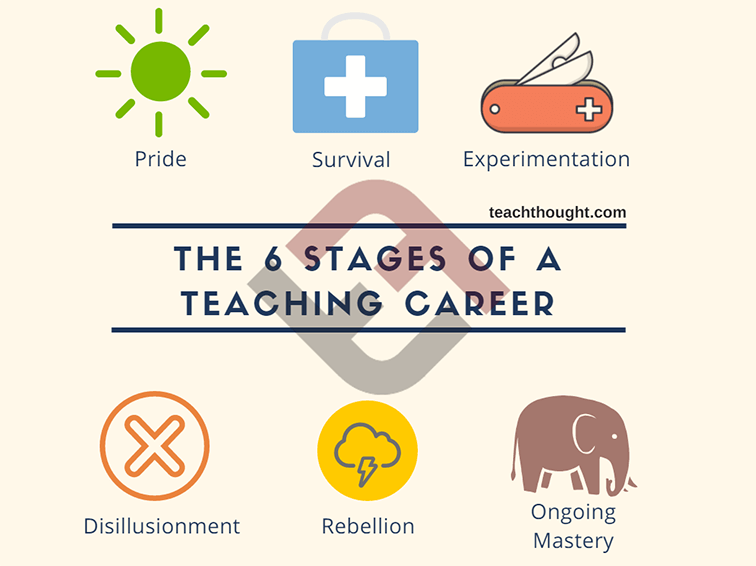 The 6 Stages Of A Teaching Career

I’ve been thinking about this, and there really is a life cycle to teaching.

Not every teacher will experience every stage–or every stage to the same degrees, anyway. Some may notice very little of this at all. And while the sequence may be more or less universal, the duration of each stage may not be. Some teachers may even get stuck in one stage and never develop any further. So take this all with a grain of salt.

Have a look and see what you think.

The 6 Stages of Teaching

This one starts before you step foot in the classroom–perhaps even as early as your acceptance into a teacher training program, and extends all the way to the first ten seconds of your first class.

This is also the most outright ‘fun’ of all the stages. During the Pride stage, you’re not quite sure what you’ve got yourself into, but that uncertainty has yet to be displaced by the sheer enormity of the task of great teaching. Most conversations with friends and family still revolve around your choice to become a teacher (such a noble profession!).

Most conversations with colleagues are still framed around the abstractions of teaching–your views on assessment, how rewarding ‘aha moments’ can be, how teams and departments are setup, and so on. Very little reality yet, only a vague sense of possibility, some uncertainty, and a lot of pride.

During this stage teaching can be, while tiring, a period of intense growth and oodles of enthusiasm.

Once the first class settles in though–first period for middle and high school, or your first classroom for elementary–things start changing, and fast. Every bit of theory is now morphing into applied theory. Practice.

All of the ideas you’ve read about and all of the enthusiasm you’ve had are still present, but they’ve taken a back seat as your brain has switched to your reptilian brain. Fight or flight, right? Of course this is a bit dramatic. As you fight to survive it’s the training and theory and enthusiasm that can help sustain you; it’s all that can sustain you. But in general, this stage of your career is characterized not so much by the chaos of teaching, which never quite goes away, but by your response to that chaos.

While it’s not necessarily miserable, during this stage teaching can be stressful and exhausting.

The third stage of your teaching career is all about informed experimentation. Though you’ve experimented in the past, you’ve got some experience under your belt that allows that experimentation to become more precise and effective. You can bring in a new tool or instructional strategy with something more than ‘hope.’ You’ve got a decent idea of what might work–a multi-genre thematic unit, for example–and so you do so.

And whether you fail or succeed, this becomes kind of addictive–and for the best teachers never really stops. Great teachers never stop growing, and growing means trying new ideas. This stage of your career is where is really starts working for you–where you waste less time, and actually start evolving your craft. Further, this kind of experimentation can lead to expanded professional learning networks as you discover new tools, ideas, and mentoring from your peers.

During this stage teaching can be, more than anything else, fun.

Over the years, you’ve learned so much as a teacher. You’ve come to better understand people, teaching, cultures, communities, technology, and as a result, you’ve grown as a human being.

But you’ve also noticed some things along the way that were easy to dismiss at first but have grown louder in your mind. Negative teachers–and then negative teachers that actually have a point. Great teachers that were forced out–or at least pushed aside–by building politics or personal agendas. The adoption of new policies that don’t seem to have the students’ best interest at heart. Money wasted on technology purchased with very little thinking about how it fits in to what the school is already going. Impersonal professional development attended just for the hours.

And perhaps worst of all, students that this ‘system’ failed. Students that taught and did everything you asked and were model students, only to graduate without a clue of their place in the world. “Shouldn’t education address that kind of thing?” you wonder? Or students that never had a chance–came to you without one, and left the same no matter what you tried.

This is tough psychologically. If you can’t reach the students that need you most, what are you doing here? If you’re going to participate in a system seemingly designed for mediocrity, with no apparent desire to evolve itself, can you last for a career? And even if you can, is it enough just to ‘last’?

During this stage, teaching can seem unfulfilling or confusing. Even ‘wrong’ if you’re prone to being macro and a little idealistic.

Great teachers don’t do what they’re told, after all. You push back. You subvert. You go around. You don’t sabotage or cause unrest, but you agitate. You ask questions. You create light, and model the same for the students. After all, this is the foundation of critical pedagogy.

In What It Means To Think Critically, I wrote “In critical thinking, there is no conclusion; it is constant interaction with changing circumstances and new knowledge that allows for broader vision which allows for new evidence which starts the process over again. Critical thinking has at its core raw emotion and tone.

I continued, “Critical thinking is among the first causes for change (personal and social), but is a pariah in schools –for no other reason than it conditions the mind to suspect the form and function of everything it sees, including your classroom and everything being taught in it.”

While this refers to students, the same goes for you as a teacher in your building. Student: Class:: Teacher: School

During the “Rebellion” stage, teaching can become fun again. You’re strangely empowered not to make a mess, but a difference–and if that means making a mess, you’ll do so. (It helps that, unlike earlier stages, you likely know how to make a mess without getting yourself fired.)

The final stage of the teaching career–one where all previous stages surface from time to time–is about the work it takes to master your craft. If it takes 10,000 hours to become an expert, that will happen in during the “Ongoing Mastery” stage. Teaching changes because the world changes, so what you’re becoming an expert of isn’t teaching, but change.

During this stage teaching, more than anything else, stops beings about you. It never really was, but that’s even more the case now. You tend to see above and through everything, which helps you to embrace, evade, plan, design, question, and celebrate with a kind of prescience unavailable even just a few years ago. Teaching, you’ve found, is not about this thing or that thing but everything. And so you work and read and experiment and connect and work some more.

If you make it this far–and so many teachers don’t–this stage can be tremendously fulfilling, and allow you to quite literally change the world one mind at a time. Making it this far isn’t just about perseverance and “showing up.” Sometimes it’s about luck. The right principal, mentor, professional learning network, school, district–even ten solid years of good health all can matter every bit as much as your knowledge of pedagogy and your personal convictions.

If you make it this far, congratulations. Education’s going to need you.