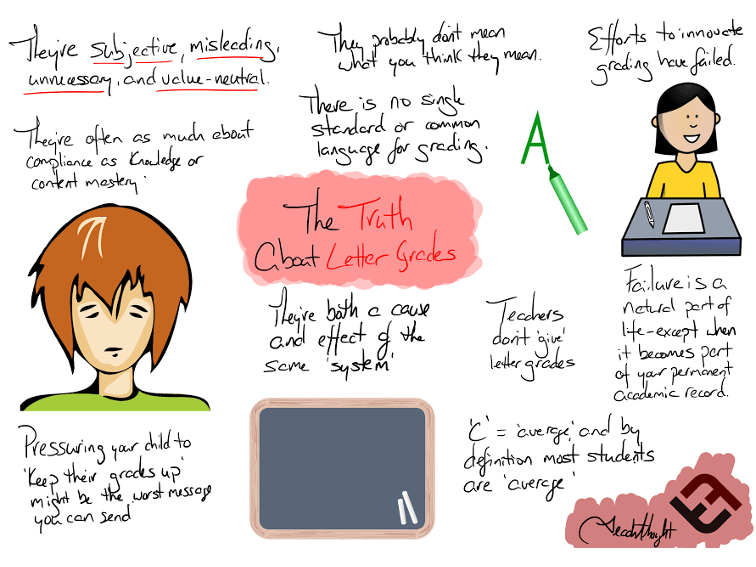 Dear Parents: Here’s What You Should Know About Letter Grades

Ah, the letter grade– a much-maligned symbol of an era where kids would go to school and passively ‘get’ grades written on thick blue and green and beige paper to take home and have signed and returned to school so the teacher could be sure the parents ‘saw’ the thing.

And that wait–the slow tick of the analog clock on the classroom wall that measured the time between when you saw the grades and when your parents would see them. Whether the grades were good or bad, that wait was unbearable. They’d already waited a month and a half since the last blue or green or beige thick-stock paper had been sent home.

There were even times I had my report pinned to the back of my shirt, between my shoulder blades. I could reach back with my little arms to grab at it, but my teacher was clever as a fox–clearly, a master of engineering and geometry and angles because no one earth was getting to that report card but my mom.

But like lunch boxes and pigtails and playgrounds and varsity jackets, while iconic, letter grades are full of spectacle and half-truths. We’ve talked about this idea before–one article below, for example–but today we’re going to address parents directly with the hope that they might better understand what they’re looking at when they see that ‘grade.’

More than anything else, they’re reductionist. Imagine rating your marriage or own job performance based on a single letter. You could do it, but like Chris Rock said, ‘You drive a car with your feet; just because you can do it, doesn’t mean it should be done.’

Unfortunately, we don’t get to make the rules.

Admittedly, ‘innovate’ and ‘effort’ are relative here, but efforts include:

And for reasons it’d take a whole separate post to explore, all have (wait for it…) failed.

So, letter grades have largely resisted innovation. Standards-based grading, no grading (see “Zen & The Art of Motorcycle Maintenance”), exchanging letters for numbers (1-4 instead of A-F), and more have all come and gone as efforts to fix the issue. Rubrics help, but only so much.

The primary issue is that letter grades are a product of the same system that’s seeking to innovate them, and the evaluations for the grades come from within the system as well. Imagine McDonald’s being in charge of innovating scoring for health department walk-throughs. Could they be trusted to evaluate themselves? Possibly. Could we expect them to innovate that scoring while leaving the rest–food, menus, eating spaces, marketing, etc) innovation-less?

Letter grades don’t mean what you think they mean.

You’d think A means good/smart/excellent/ready for college, when there’s actually a better chance it means completed and turned in all their work/reads well/writes well/has a good relationship with the teacher–not to imply that the teacher will show favoritism, but students that communicate well with teachers and do so frequently tend to perform better in school.

While there are a variety of grading methods and systems and goals and rules, universally speaking, ‘C’ means average.

And by definition, most students are ‘average,’ and there’s nothing wrong with this. Their mastery of content will be average, and/or their performance against their peer set will be average. Few people are content being ‘average,’ mainly because of how we define and use the word more so than something more philosophical. Being ‘average’ implies a lack of effort or potential or some other missing artifact that we value in people and so want to promote in children. And few applications of the word ‘average’ (think Dow Jones, a baseball player’s hitting average, election results, and others) cause more concern than suggesting a student is ‘average.’

Being ‘average’ implies a lack of effort or potential or some other missing artifact that we value in people and so want to promote in children. And few applications of the word ‘average’ (think Dow Jones, a baseball player’s hitting average, election results, blood pressure, and etc.) cause more concern than suggesting a student is ‘average.’ But an average grade doesn’t mean the student has an ‘average’ intelligence across the board but it doesn’t change the truth: Most students *are* average. That’s what average means.

A ‘B’ means above average–that student has above average knowledge compared to their peers (norm-referenced), an academic standard (standards-based), and others (e.g., criterion-referenced assessments). ‘A’?

An ‘A’ refers to performance and mastery well above average–two levels above at least, but could be more because ‘A’ is the ceiling; Leonardo Da Vinci and a mere ‘good sculpting student’ could each do no better than an ‘A.’ An ‘A’ should be an amazing achievement. Instead, it’s the expectation for ‘good students.’

How inspiring is that?

And a ‘D’? A ‘D’ means ‘below average,’ though we think of it as one step from failure and thus decidedly bad. I’m not arguing that a ‘D’ is okay or good or anything. I’m saying that all this letter grade and assessment and scoring is mostly nonsense. Grades don’t mean what they seem to mean.

Letter grades don’t mean what they used to mean.

Furthering the idea of ‘meaning, ‘School’ means something different than it did 25 years ago. So does the word ‘test.’ So does college.

So do letter grades.

Imagine using a digital portfolio instead of a report card. If you want to add a letter grade, take a picture of the student holding a giant letter ‘B’ like they were on Sesame Street. Yay for innovation.

Like anything in education, if they distract from the student creating new ideas from divergent sources of information, they’re ‘bad.’ If they harm a student’s sense of identity or future prospects as a human being, they’re bad.

Point systems change from teacher to teacher, school to school, grade level to grade level, and so on.

Out of 10 teachers, 10 would believe different things about the quality of student work. Universal rubrics and standards-based grading can help here but consider for a moment what schools seek to do: promote understanding.

What could be more subjective than how well someone understands something?

Pressuring your child to ‘get their grades up’ could be doing more harm than good.

Why? At best, it’s extrinsic motivation that is difficult to sustain. At worst, it conditions both parents and students to completely miss the point of education.

In fact, the percentage who do would likely be extraordinarily low. It’s possible that some teachers do, I guess. And not being in every classroom to see every student-teacher transaction, it’s obviously just guesswork on my end. But from my decade-plus in education, it’s something I very rarely see. There are bad accountants, bad doctors, and bad CEOs, so there are ‘bad teachers,’ too.

But believing that teachers are out to get your child–or for the children to sway you to believe that–is a slippery slope.

Letter grades don’t matter as much as you think they do.

And rarely at all before high school.

Yes, a student can learn to accept ‘bad grades’ so that they lose their sting, and students lose their motivation in the process. In that way, Cs and Ds and Fs in 3rd grade ‘matter.’ But in reality, even after a high school, a student with a 2.3 GPA can still accomplish anything he or she wants to accomplish. Letter grades are static and subjective snapshots of one point in time.

That’s it. Nothing more, nothing less. And honestly, they’re not even very good at that.

And the worst part about letter grades? Whether your child gets ‘good grades’ or ‘bad grades,’ either reality can mask more important truths about their invitation, literacy, curiosity, genius, mindset, and other factors that will be far more critical to whatever ‘success’ they strive for in life.

How should we respond? A few years ago I wrote 12 Alternatives To Letter Grades In Education. That could be a start.