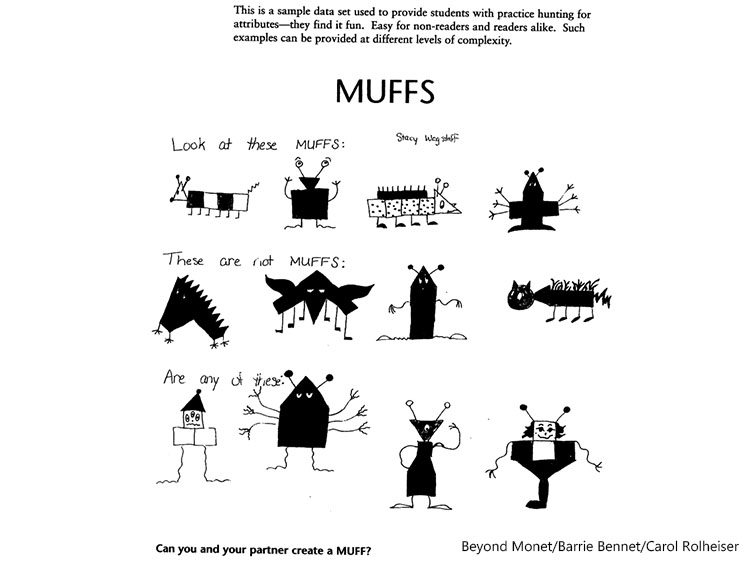 In 1956, psychologist Jerome Bruner published a book called “A Study of Thinking.”

Being a psychologist, Bruner was interested in cognitive processing–how people think, and how those tendencies might be used to inform teaching and learning processes. He developed a new way of introducing learners to new concepts called Concept Attainment.

What Is Concept Attainment?

The image above from this document via Beyond Monet/Barrie Bennet/Carol Rolheiser is a useful example of how Concept Attainment works.

It can be thought of as game of ‘find the rule.’ Concept Attainment is a ‘backward conceptualizing’ approach to making sense of new ideas. It is a teaching strategy characterized (in terms of thinking patterns of the learner) by “a pattern of decisions in the acquisition, retention, and utilization of information that serves to meet certain objectives” (Bruner et al 1956).

Linda Neff at Northern Arizona University adds that Concept Attainment is a “close relative to inductive thinking (Joyce and Weil 1967:15), (and) focuses on the decision-making and categorization processes leading up to the creation and understanding of a concept.”

Neff also explains that there are several advantages to this approach, including learning “how to examine a concept from a number of perspectives, learning how to sort out relevant information”, the benefit of seeing multiple examples of ideas, and maybe most importantly, moving beyond mere concept–definition association.

This allows for the idea to be seen in its native context, and a more authentic and fuller definition to emerge.

How Does Concept Attainment Work?

In the concept attainment process, new ideas are introduced–and defined by students–inductively through the “act(s) of categorization” (Bruner, Goodnow, and Austin 1956:244). Students see attributes, examples and non-examples, form theories, and then test those theories against the data given until they are able to able to name the idea.

This reverses the typical process of introducing an idea (e.g., gravity) by narrowly defining it (e.g., the force that attracts a body toward another physical body having mass). The Concept Attainment process requires learners to focus on attributes, categories, and relationships rather than simply mirroring an idea with a definition.

In the STEM field–one marked by change, uncertainty, and new (and often unfamiliar) ideas–this conceptual approach is a tidy fit for teaching.

What Are The Benefits Of Concept Attainment?

“Concept attainment is designed to clarify ideas and to introduce aspects of content. It engages students in formulating a concept through the use of illustrations, word cards or specimens called examples.

Students who catch onto the idea before others are able to resolve the concept and then are invited to suggest their own examples, while other students are still trying to form the concept. For this reason, concept attainment is well suited to classroom use because all thinking abilities can be challenged throughout the activity.

With experience, children become skilled at identifying relationships in word cards or specimens. With carefully chosen examples, it is possible to use concept attainment about how to teach almost any concept in all subjects.”

Examples Of Teaching With The Concept Attainment Model

Also from California Lutherhan University, the following is an example of how to Teach Concept Attainment in math.