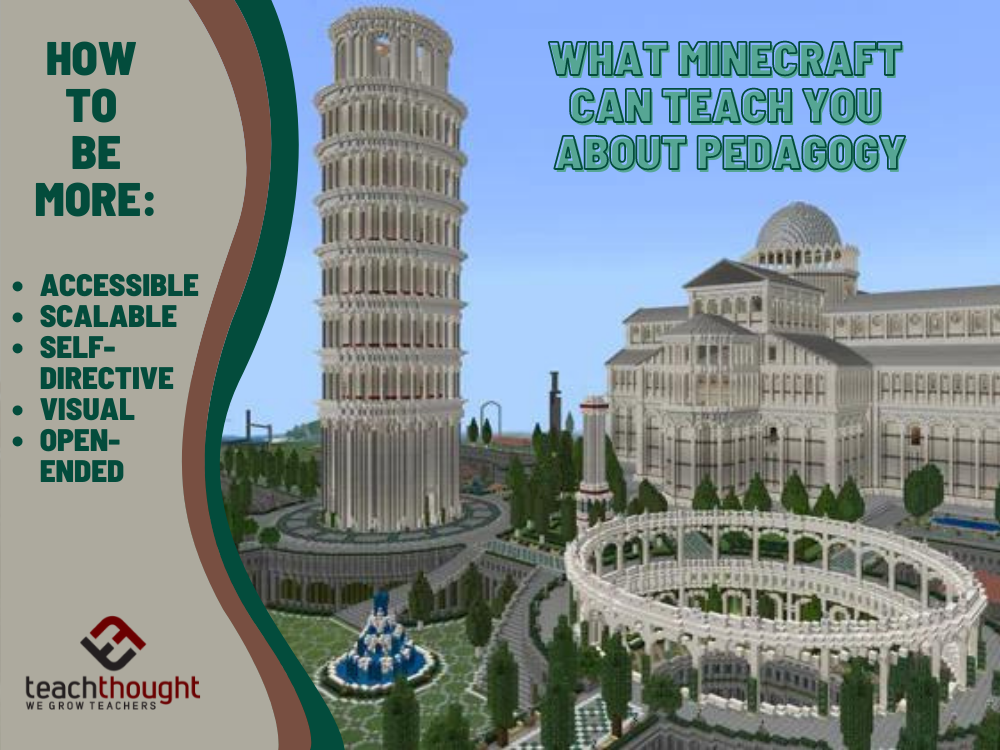 Minecraft in Education: What Minecraft Can Teach You About Pedagogy

Minecraft is a simple, clumsy-looking little game full of blocky graphics and unclear terms of play. It is essentially a giant sandbox of digital legos that players can do with what they wish–tear stuff down, dig holes, or build dizzying towers of complex design and architecture.

And it’s a perfect analogue for what’s possible in learning.

First off, let’s be clear–it’s a huge, huge hit. Minecraft has sold over 20,000,000 copies to date. It is available for iPad, Android, PC, and Xbox (though sadly, not the PS3), and is quickly becoming a cultural phenomenon. What makes it popular with children is tempting to oversimplify, but five characteristics really stand out.

5 Lessons To Learn From Minecraft In Education

Minecraft is simple to pick up and play right away–and is dead simple to use on a touchscreen to boot. (My five year-old son has been playing it since he was three.) It cannot be overstated how critical this is to the success of something that doesn’t appear ambitious. Minecraft looks simple and dated, but that also makes it cheap, easy to use, and non-threatening for gamers and “non-gamers” alike.

Just because it’s simple looking and accessible doesn’t mean it’s not powerful. Like any well-thought-out curriculum, it is flexible enough to adapt to all learners no matter their skill level without the game developer (read: teacher) having to reinvent the wheel with every new bit of data. It’s as big or small as the user’s ambition.

Minecraft won’t do anything without the right input from the player. It doesn’t drag you along by the nose, but rather sits and waits for the player to do something important. And with every “correct” action by the player, they are rewarded with more freedom, opportunity and visual evidence of their decisions.

Speaking of visual evidence, in Minecraft, every building or empty space is a decision to build or not to build. The players can see their own progress and self-assess how things are evolving based on an inner-voice more critical than any teacher might be. This isn’t an argument in support of forced visuals for otherwise non-visual content, but rather new ways to display student thinking and performance. Someone’s actually building a scale model of the entire planet using Minecraft. They’re not going to have to wonder “how they’re doing,” nor will the parents. They can look and see.

While some students hate English precisely because it’s often subjective and open-ended (preferring the right-or-wrong tone of math instead), open-ended learning also has a different feel to it that encourages students to keep going, to do more, and to learn-through-iteration, which is fundamentally different than the take-the-test-at-the-end-of-the-unit-and-then-move-on approach in many classrooms.