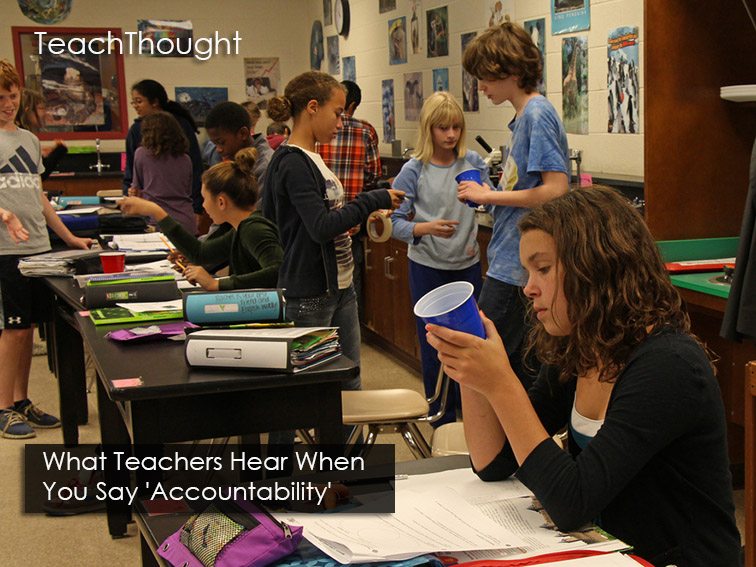 What Teachers Hear When You Say ‘Accountability’

After 10 years of federal education policies based on test-based accountability, there has been no perceptible improvement in student performance among high school students (which, when you get right down to it, is what really matters) as a whole, or when the data are broken down by different groupings of disadvantaged students.

There is little doubt—whether test-based accountability is being used to hold schools accountable or individual teachers—that it has failed to improve student performance. That should be reason enough to abandon it. But it is not.

The damage that test-based accountability has done goes far deeper than a missed opportunity to improve student achievement.  It is doing untold damage to the profession of teaching.

Anyone who has been paying attention has by now seen many videos of widely admired teachers explaining to the camera why they are giving up teaching and why they would not recommend that their children, nieces or nephews choose teaching as their career. The narrative is always the same.

They have loved teaching because it has enabled them to make a real difference, one child at a time.

They talk about the children consumed by anger or alienation who they reached with kindness and care and whose life was turned around as a result.

They talk about the student who discovered in music something they could do well and take pride in.

They describe the student whose interest in science was kindled by field trips that departed from the official curriculum and included material not on the test but which enabled the student to see the wonder of science all around her and who went on to win the country science fair and another who sat silent in class and never turned in any homework until the teacher was able to unwind the nature of the problem in a horribly abusive family situation and get social services to rescue the student.

These teachers understand the crucial importance of enabling their students to use English and mathematics well. But they also speak eloquently of spending a professional lifetime seeing their students not as vessels to fill with vocabulary, grammar, diction and mathematical algorithms, but as people whose potential will forever remain locked inside themselves until they can believe in themselves and their possibilities, people for whom their relationships to other people loom far larger than their obligations to turn in their homework, people whose curiosity and eagerness to prove themselves against the challenges of growing into adults are much more important than their score on a test, people for whom math has neither meaning nor interest until they can see why it works and what can be done with it.

These are teachers whose entire professional life has been marked by pride in their work and their ability to use their accumulating professional experience to make large differences in the lives of their students. But they cannot take it anymore. It makes no sense at all to them to measure all their accomplishments by student scores on tests of low-level English and mathematics literacy when they want them to understand where political liberty came from and what it takes to sustain it.

Reducing everything they have tried to do for their students to scores on low-level tests of two subjects makes a mockery of their work. Using the scores from this very narrow slice of student accomplishment to mark their school with an A or B or C or, worst of all, a D lumps together the school just beginning to turn around under a brilliant new leader with the school on the other side of town that has been sliding downhill under listless leadership for years. It brands the outstanding teacher in that school with the same iron that should be applied to the principal who has failed to lead. They know that the value-added methods now in vogue can label an individual teacher excellent one year and a dunce the next.

They describe what they are experiencing as a process in which, piece by piece, they are being told what to do and how to do it by people who are not teachers and have little respect for teachers or the work that teachers do. They see policymakers embracing one nostrum after another that their own professional experience tells them will not work. They know that the real motivation behind the vogue for teacher evaluation is to fire teachers who are deemed to add insufficient value to a student’s education, but they think that tests used for that purpose measure very little of what they think a good education is and even less of what a good teacher does for the students under his or her care.

Imagine what a good doctor would think if he or she were told that the problems in our healthcare system would be solved if only doctors were publicly branded with an A, B or C grade by some external authority using only numbers generated by computers based only on two absurdly limited dimensions of healthcare outcomes. Suppose all the talk of improving healthcare came down to getting rid of bad doctors, but the government was doing almost nothing to improve the quality of new doctors.

What do you think young people at the top of their high school graduating classes would think of the medical profession as an option if they saw all these punitive actions being taken against doctors, if they saw that, increasingly, doctors had less and less control over their work and young doctors were not making enough money to support a family?

What do you suppose doctors would think if hospital administrators got together and decided that the answer to the country’s healthcare problems was to use a 49-page evaluation rubric to evaluate all the doctors admitted to practice at that hospital?

Test-based accountability and teacher evaluation systems are not neutral in their effect. It is not simply that they fail to improve student performance. Their pernicious effect is to create an environment that could not be better calculated to drive the best practitioners out of teaching and to prevent the most promising young people from entering it. If we want broad improvement in student performance and we want to close the gap between disadvantaged students and the majority of our students, then we will abandon test-based accountability and teacher evaluation as key drivers of our education reform program.

But no one, certainly not me, would argue that we should not hold our professional educators accountable for their performance. The question is, what would accountability look like if we actually regarded our teachers as professionals doing professional work, instead of interchangeable blue-collar workers doing blue-collar work?