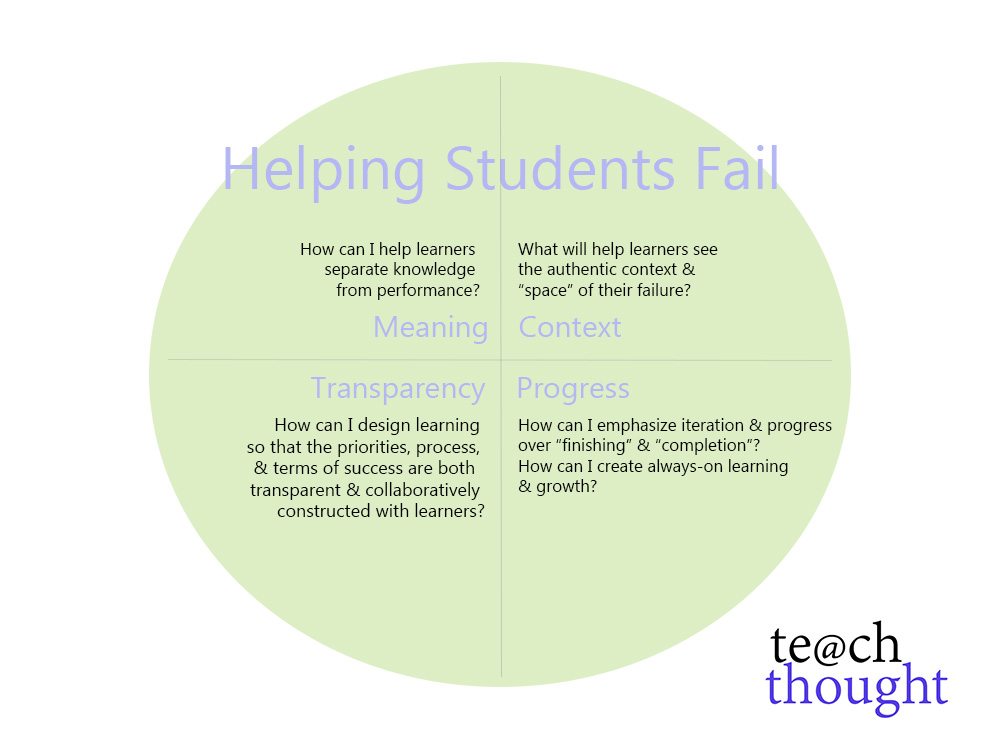 Ed note: This post has been updated from a previous publishing

As teachers, allowing students to see failure as a negative experience is one of the worst things we can do.

Granted, this isn’t unique to education. The idea of risk-taking, failing, looking, leaping, try-try-again is ingrained in our cultural DNA. But in education, we certainly have made it dramatic. In fact, we don’t even need the whole word anymore. Failure erodes to fail, which itself erodes to simply F.

Every bit of effort, every miscommunication, every missing skill or competency, every degree and layer of performance–academic and otherwise–is distilled down into a single character.

And there isn’t a mark lower than an ‘F’–a hundred zeroes and missing assignments still say F, which means there is literally doing nothing at all would’ve yielded the same letter. That’s pretty brutal. (On a related note, here are 12 alternatives to letter grades.)

What Does It Mean To ‘Fail’?

You can fail a test or course, but the idea of failing to understand has a completely different connotation. The former could be as much about missing work or organizational habits or even literacy levels; the latter, while subjective, is something else entirely.

If understanding is about making meaning, then failure is always only temporary. Making meaning is a present participle that indicates an ongoing process. It’s indefinite, if for no other reason than we can never fully and completely understand anything.

Constructivism as a learning theory makes room for failure at its very core, describing learning as an active process and continuous process, stratified in layers of performance. Creating, making, constructing, building, designing and other related terms reflect the nature of both learning and knowledge as a cycle.

Some kind of feedback loop is crucial, especially in academic settings where the pace of the course is set before we even know the students’ names. So it’s easy to excuse interrupting this cycle to assess understanding, which we do in various forms.

And provided we’re clear that even a perfect assessment is simply a snapshot that’s already dated by the time the feedback is given, there’s nothing wrong with that. Knowledge is both perishable and alive.

If we can use grades and feedback and gamification and other processes to communicate that to learners and parents and communities, then all is well. (Gamification, properly used, is capable of uncovering the nuance of the learning process.)

But so far, we’ve got room to improve here. Which is where the idea of “failing forward” comes in. Helping students fail isn’t just a matter of making them feel better–it’s about thinking like a scientist, farmer, designer, or CEO–failing gives me the data I need to proceed. And knowledge? Those letter grades don’t mean much. An A doesn’t guarantee understanding, and an F doesn’t preclude it.

To ‘fail’ could mean a thousand things. It’s also not that simple. Failure doesn’t give us much more than a starting point.

Which is exactly why students need help to understand it.

The Role Of Failure In Learning

Properly understood, failure can help students see learning as a personal journey rather than a matter of external performance. It emphasizes meaning as contextual and distinguishes procedural knowledge from content knowledge.

The primary value, then, might be in teaching students learning and knowledge rather than responsibility.

Where can I start as a teacher?

By Clarifying The Meaning

The Idea: Distinguishing knowledge from process so students can see failure not as one thing, but a hundred. (Or fewer, depending on grade level and situation.)

Guiding questions: How can I help students separate knowledge from performance? Considering their goals–and the goals of education–is it viable for them to value both?

The Idea: Understanding the scale, impact, and nature of failure. The ‘failure’ extends *this* far, for example–this lesson, this test, this class, this project, this community, this goal, and so on. The impact is this broad, and is or is not correctable.
You might specify (guess?) what caused the failure–or help them learn to do it themselves, then celebrate that specification as a kind of triumph. We found the problem!
Guiding questions: What is the nature of this failure for this student? And as a result, how should I respond, and how should they respond?

The Idea: Illuminating learning as a systematic process that learners and families actually understand

Guiding questions: How can I design learning so that the priorities, process, and terms of success are both transparent and collaboratively constructed with learners?

Guiding questions: How can I emphasize iteration & progress over ‘finishing’ and ‘completion’? How can I create always-on learning & growth? How can I design work that students are both willing and interested in returning to improve? 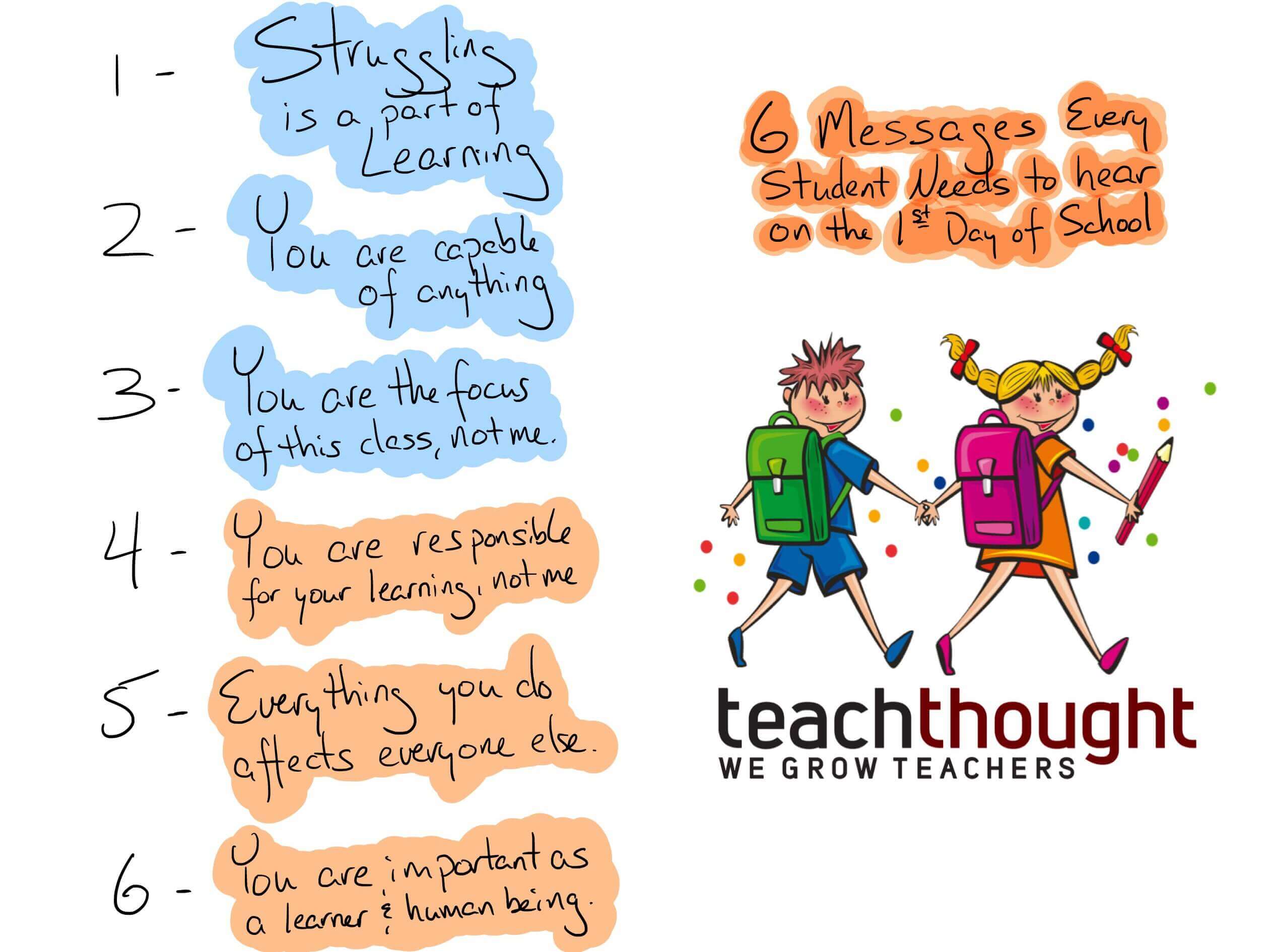 6 Messages Every Student Should Hear On The First Day Of School by Terry Heick & Jackie Gerstein For specific training and professional...

How To Get Parents Meaningfully Involved In Your School

Getting parents engaged in school leads to improved academic outcomes for students and the potential for a healthier community.