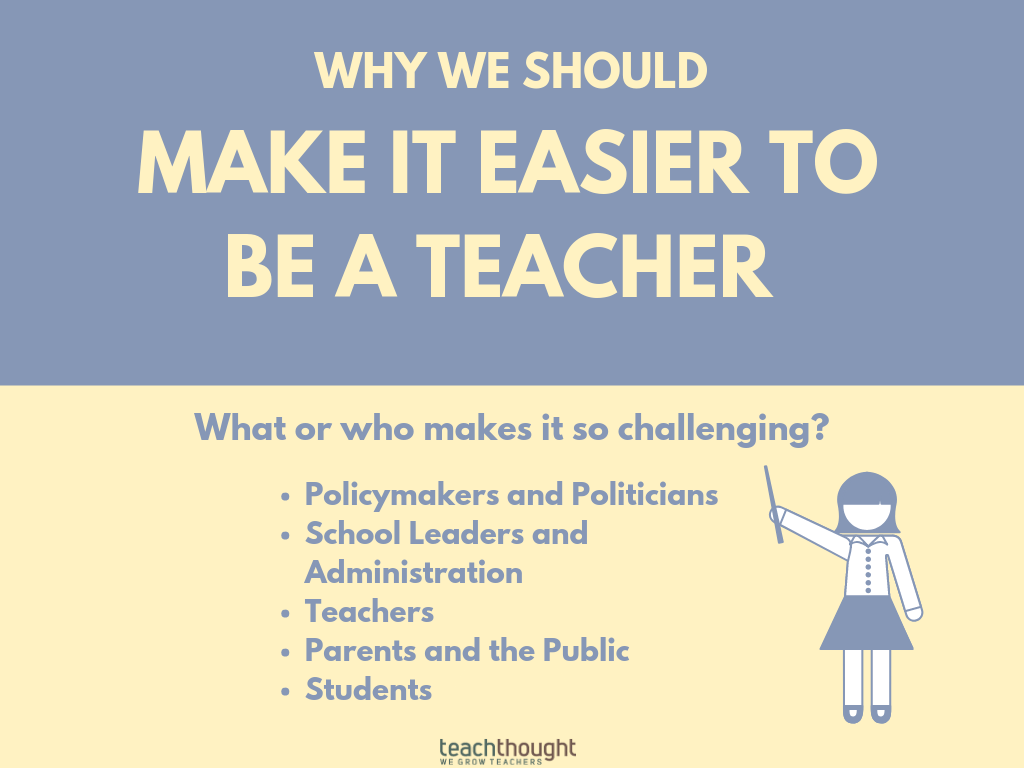 Recently, I tweeted a reflection about the challenging nature of being a teacher.

Because I like to be precise with my language and thinking it struck me that the phrase “teaching is hard” isn’t quite right. If you listen to The TeachThought Podcast, you’ve likely heard me say it–most recently as I talked about volunteering in one of my daughter’s classes. What’s really hard is the job of being a teacher and that’s a problem we should be working on.

I’ve often said “teaching is hard” although upon reflection I think that’s not quite accurate. While the act of teaching can be challenging, I think more accurately it’s that being a teacher is hard. That’s a problem we should be working on.

One of the responses I received highlighted, at least in my perception, a significant reason for the state of education today.

Well, if it wasn’t hard, why should it be paid? It’s a job right? My job is kinda hard. And I would not go if I want [sic] being paid.

What seems to be an underlying assumption here is that being a teacher should be hard and that’s why we’re paying them. Or maybe put another way, we’re paying teachers to do hard work. While that second statement seems to be easier to swallow, doesn’t it seem sensible to actually make the jobs of teachers easier?

If we’re asking, often demanding, that our teachers help our young people become the best they can be, shouldn’t we clear as many obstacles as possible for these change agents so they can do their best work?

As in every, or at least most professions, teachers do their best work when provided opportunities for autonomy, mastery, and purpose. Unfortunately, teachers are rarely afforded those opportunities. Put that together with structural and logistical challenges and we’re left with a status quo in most schools that puts a low ceiling on potential.

What makes the job of a teacher so challenging?

To be clear, the actual act of teaching someone something (or somethings) can indeed be challenging but what I’m referring to is the day to day rigors of the actual job of being a teacher. Not that I need to detail a list for teachers, you already know, but maybe it’s most helpful to note who makes the job of a teacher so difficult on big picture issues.

I don’t think it’s a stretch to claim that an overwhelming majority of teachers believe that policymakers and politicians on all levels struggle to truly understand the job of teaching. Part of that is because most have never been teachers but I think there’s also a disconnect between what many experienced as students and what is and needs to be happening in our schools now.

If most policymakers, especially the older ones with arguably more power, were schooled in a more traditional and less student-centered environment it makes some sense that this is what they’d fall back on as the desired outcome of their policies.

Secondly, the model of education from decades past relied much more on what Michael Polanyi might call focal or explicit knowledge, but it’s become increasingly clear that teaching and learning need to include more tacit knowledge. The difference might best be described as ‘know-how’ – as opposed to ‘know-that’ (facts).

So we have teachers being incentivized (and punished) by high stakes accountability measures to do a nearly impossible task that many don’t really believe in. Add to that the, at least perceived, unfavorable language and/or actions by politicians toward teachers and now we’re in the territory of implosion.

We need more and better communication between our education thought leaders and politicians and policymakers that centers around asking important questions, not short-sighted and easily quantifiable ones.

Here again, we too often see high stakes accountability measures driving the actions of our schools in unhealthy ways. Instead of focusing on growing a Culture of Teaching and Learning, we see varying degrees of a Culture of Achievement. This can show up as multiple or stop and start initiatives, data-driven staff meetings, prescriptive curriculum and pacing guides, and sometimes even authoritarian and heavy-handed punitive measures.

Teachers want to do great work but are often trapped between doing what they intuitively know is best for their learners and what they’re being told to do, or perhaps more accurately as my responder above noted, what they’re being paid to do. 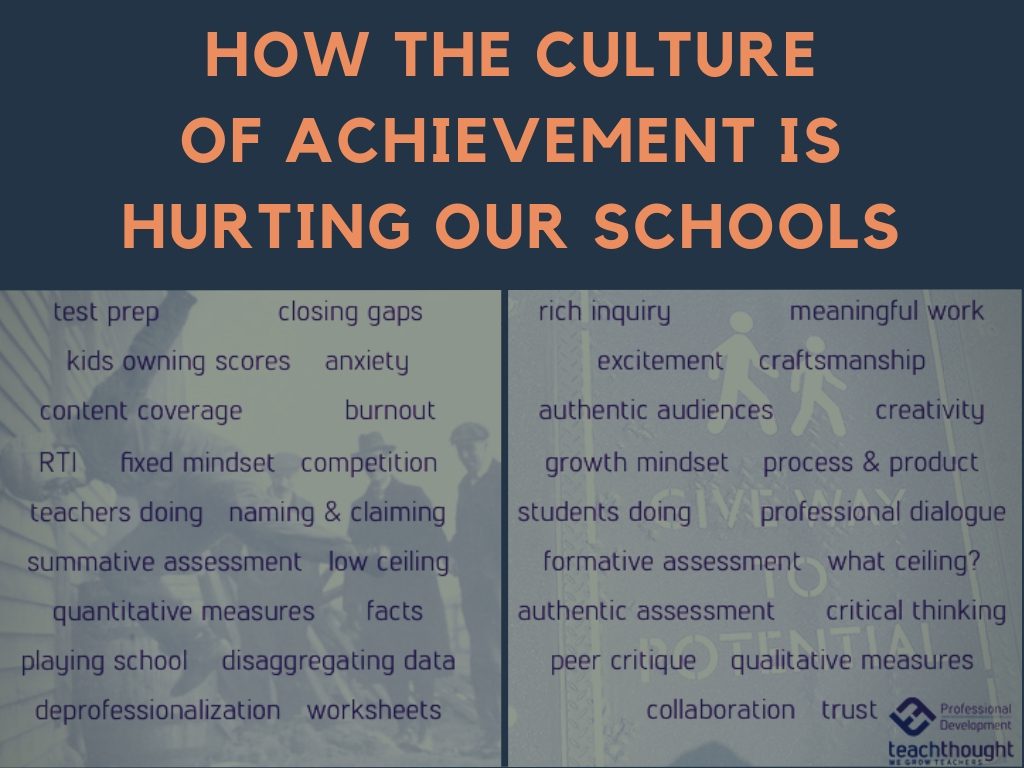 Our schools are at their best when leadership and administration see their role more as support staff than ‘boss’. Related to purpose, what if every administrator continually asked, “what can I do to help my teachers best prepare their learners for the modern world?” Be patient with growth, stop creating initiative overload, and root everything you do in durable anchors that help avoid pointless professional development.

Yes, sometimes we make our own jobs harder. We want autonomy but sometimes we don’t exercise the best judgment. It’s worth asking “how much freedom should a teacher have?” It’s also worth asking “how do we hold ourselves accountable?” What if we held ourselves accountable by engaging in processes like protocols to discuss the quality of our work. To be fair, this is something that leadership should value and make time for but stop closing your doors and teaching in isolation. Collaborate, reflect, refine, lean on and into one another, and grow!

Parents and the Public

30-40 years ago the sense of compliance and control in our schools and classrooms looked much different. I’m not saying that’s necessarily good but one thing that often makes the job of a teacher so difficult is students who have been empowered to behave in an unruly and often defiant manner. It’s not most students or schools with extreme behavior problems but this is a very real issue and parents are at least partly to blame.

As a parent of two schoolchildren I don’t expect blind obedience, in fact I encourage questioning the status quo. But as a teacher, I had just one basic rule that asked students to not take away from the positive learning environment I was working to create.

Teachers can be faced with everything from the typical mild disrespect physical violence between and from students. That kind of stress can be hard to understand from people outside education but as a former emotional-behavior disorder teacher who developed stress-related eczema I can vouch for the reality.

If parents and the public truly understood what our schools could be they’d demand more from our politicians and support schools and teachers in a much different way. Ask nearly anyone and they’ll say things like, “teachers are saints” and of course they “support education”. What if parents and the public asked a similar question as administrators, “what can we do to help our schools best prepare learners for the modern world?”

Stop being helicopter or snowplow parents, it’s not helping teachers and it’s certainly not helping your kids.

Speaking of kids. Yes, students make the job of teaching hard because they are people and we’re all inherently complex and often problematic. They all come with different needs, strengths, weaknesses, emotional and/or intelligence issues, desires, passions, and sometimes behavior problems.

Yes, much of this is their responsibility. But what if parents were better at parenting and if our approach to education were more academically and intellectually engaging? Do more kids have ADHD these days or are the things we’re asking them to do surfacing non-compliant behaviors that fit that diagnosis?

I’m not saying teaching is not rewarding and of course, there are some very real benefits, but overall being a teacher is a hard job. In our work with teachers around the world, it’s evident when we hear teachers say they understand and agree with the shifts in practice we’re suggesting but often feel overwhelmed with their daily circumstances and realities.

There are many more things than those I’ve mentioned that make it tough. Teacher pay, having to buy supplies, lack of bathroom breaks, having to devour lunch in mere minutes…several of you responded to my question on Twitter with those and more.

I’m writing a piece for @TeachThought & @TeachThoughtPD about what makes the job (not the act) of teaching so hard & why/how we might change that.

Please reply &/or share:
What thing(s) make being a teacher more difficult than it could or should be? #teaching #edchat #education

We need our teachers and education to be better. It would be really smart of us to make that work easier so it can be.

TeachThought's Director of Professional Development, formerly with the Buck Institute for Education and the Collaborative for Teaching and Learning after 15 years of classroom teaching. Passionate about the leading of learning through inquiry, I have been called a professional thought stretcher due to my love for questioning.