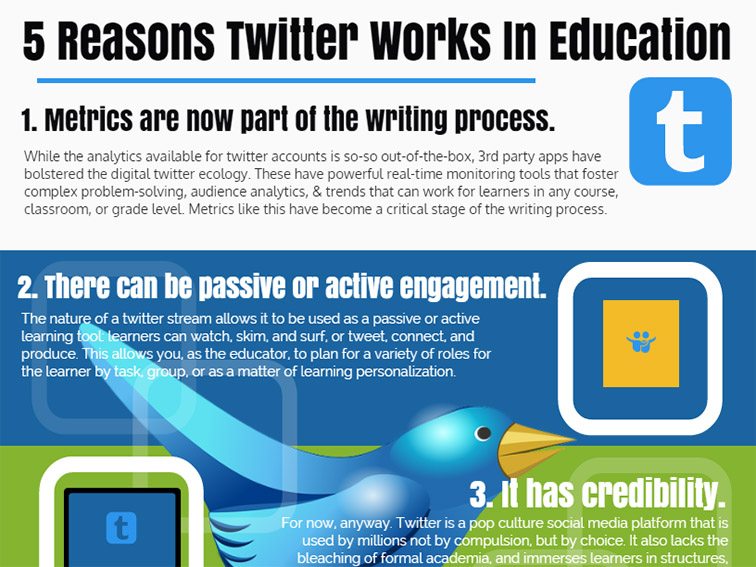 As the collective family of social media channels grows, each adopts their own personality.

LinkedIn is the oldest sibling –a go-getter that wore a suit in middle school. Instagram is the playful teen that opened her own restaurant with her family’s money. Facebook is the walking political argument that you know not get started. And twitter? twitter is the wild child of the bunch.

Offering quick bits of information, a dynamic stream that looks great on desktop and mobile devices, and a variety of ways to communicate from #hashtags to @messaging to micro-blogging and link distribution, twitter works, and unlike facebook, blogging, and other digital tools, when something does indeed ‘fail’ on twitter, the overwhelming number of tweets can help mitigate the loss.

The best I’ve heard explanation we’ve heard for the difference between twitter and facebook is (paraphrased), “Facebook makes me dislike people I’ve known for years, while twitter makes me like people I’ve never met.” I’m not sure it’s quite that cut and dry, but the big idea remains the same–every social channel has its own personality.

But for formal learning applications, many educators cringe at anything remotely useful showing up on an unfiltered (And unfilterable) platform full of so much non-academic snark. While all social media sites serve some useful niche or they’d likely disappear, twitter has significant potential for academic applications. We’ve explored this concept before, with our popular twitter spectrum, 25 Ways To Use Twitter In The Classroom By Complexity.

But while specific ideas are nice, it made sense to look at why it works. 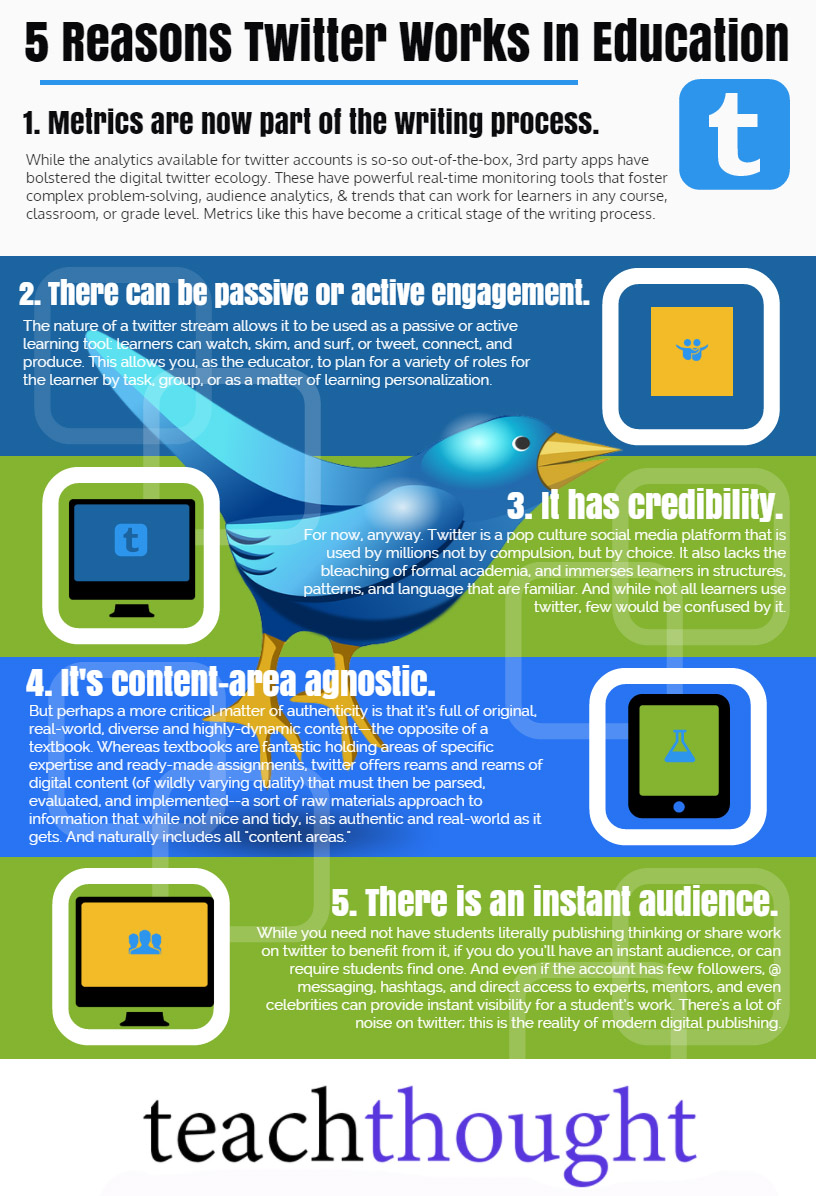 1. Metrics are now part of the writing process.

While the analytics available for twitter accounts is so-so out-of-the-box, 3rd party apps have bolstered the digital twitter ecology with platforms like twitonomy. These have powerful real-time monitoring tools that foster complex problem-solving, audience analytics, and trend transparency that can work for learners in any course, classroom, or grade level. Metrics like this have become a critical stage of the writing process.

2. There can be passive or active engagement.

The nature of a twitter stream allows it to be used as a passive or active learning tool: learners can watch, skim, and surf, or tweet, connect, and produce. This allows you, as the educator, to plan for a variety of roles for the learner by task, group, or as a matter of learning personalization.

For now, anyway. Twitter is a pop culture social media platform that is used by millions not by compulsion, but by choice. It also lacks the bleaching of formal academia, and immerses learners in structures, patterns, and language that are familiar. And while not all learners use twitter, few would be confused by it.

But perhaps a more critical matter of authenticity is that it’s full of original, real-world, diverse and highly-dynamic content—the opposite of a textbook. Whereas textbooks are fantastic holding areas of specific expertise and ready-made assignments, twitter offers reams and reams of digital content (of wildly varying quality) that must then be parsed, evaluated, and implemented–a sort of raw materials approach to information that while not nice and tidy, is as authentic and real-world as it gets. And naturally includes all “content areas.”

Because it’s familiar, the demand for procedural knowledge is reduced so that content and task can be focused upon.

6. It can be personalized by students. Or anonymous.

Twitter accounts are free, allowing for personalized account names, avatars, following list, and of course the tweets themselves to be as unique and differentiated as the assignment or content focus necessitates. The less cookie-cutter and universal an assignment seems to be, the greater the buy-in you’ll receive from learners.

Provided you’ve thought the privacy matter through, because twitter accounts are open and digital, old tweets are instantly archived for grading, revisiting, and reference by anyone at any time. This kind of public display of thinking requires planning—anonymity for minors, being sure not to tweet sensitive information, etc.—but with safe-guards in place, can be a boon to the publishing and dissemination of thinking and performance.

Digital platforms are connected—tweet your instagram photos, post your Spotify playlist to facebook, and so on. This kind of connectivity allows more than one platform to be used simultaneously, encouraging higher-level thinking skills such as analysis, evaluation, synthesis, and creation.

9. There is an instant audience.

While you need not have students literally publishing thinking or share work on twitter to benefit from it, if you do you’ll have an instant audience, or can require students find one. And even if the account has few followers, @ messaging, hashtags, and direct access to experts, mentors, and even celebrities can provide instant visibility for a student’s work. There’s a lot of noise on twitter; this is the reality of modern digital publishing.

As mentioned above, posting a constant stream of short messages isn’t necessary to ‘use’ twitter. Even as a simple observation tool, with categories like trending topics, #hashtags, and lists, twitter is flexible enough to be used read-only.

And for those users who do tweet, its original function as a micro-blogging platform can be helpful to get accomplished writers started (e.g., publishing thesis statements), or act as the writing itself for hesitant learners who may write little else without the inherent brevity of the blue-hued social media giant.