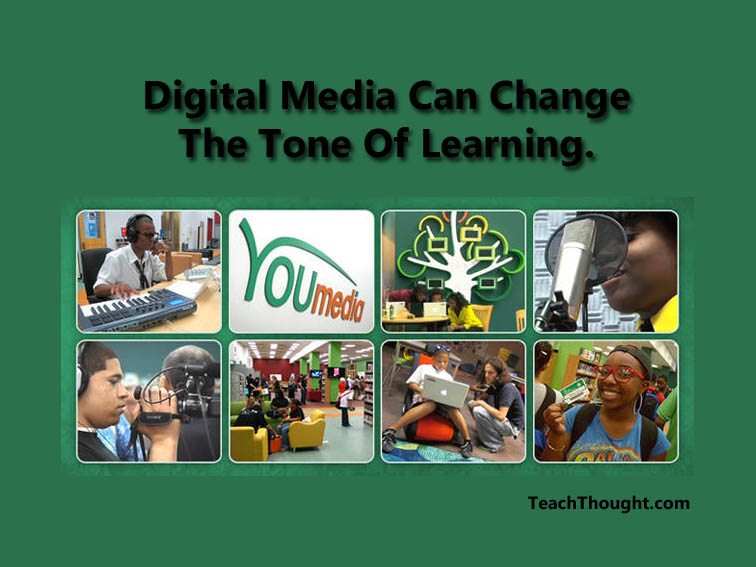 Digital media is really more powerful than we’re giving it credit for.

And it already gets a lot of credit.

While “social” media gets all the praise, social media is itself digital, with the digital versions of films, music, magazines, images, and other stuff holding inherent characteristics that allow it to be shared, saved, and searched in ways that physical media simply can’t.

This is not to say that digital media doesn’t have limitations of its own, but it’s easy to miss how simply being digital has changed the information, entertainment, and connectivity we crave as human beings.

While there is obvious overlap between the two, digital literacy is different than standard literacy frankly because understanding is about context and the context of digital and social media is almost impossibly wide and often frustratingly whimsical.

But if you’ve made the transition to using digital media in the classroom, you’re likely aware that it doesn’t have to be that way. If only for a moment you can quiet your instincts screaming that Shakespeare > Zombies With Machine Guns, you might notice how incredibly connected digital media is.

Why Digital Media Works In Learning

Because it can be shared, mashed, liked, remixed, embedded, songify-ed, and read on any device at any time, anywhere, digital media has a pervasiveness about it that’s less about ubiquity and more about accessibility. And with analytics and data and social capacity and student engagement all being critical parts of the modern classroom, digital media is a natural teaching tool.

Which is presumably why YOUmedia has teamed up with 5 Chicago Public Library locations to create learning spaces in libraries based almost entirely on the gravity of digital media.

In the video below, you’ll hear program developers use words like node, hub, and spaces–all concepts that depend on the power of digital media.

It is difficult to express how much more powerful and compelling students find video games like Skyrim and music like Jay-Z’s Magna Carta Holy Grail and apps like Vine and Instagram and texting instead of talking –and their phones instead of, well, anything else.

And so much of this approachability has to do with tone. Digital media is nothing if not (at least outwardly) passive.

And railing against it all on moral (and intellectual) grounds is a losing battle in the 21st century. Digital media literally has the power to bridge the worlds between students and the greatest thinkers the world has ever known. 2pac and Shakespeare, Assassin’s Creed III and the Declaration of Independence.

So instead of growling at the kids to get off our lawn, we can instead take a look at the video below of YOUmedia in action, paying close attention to what it is about digital media that makes it so compelling for students.

YouMedia @ CPL is an innovative, 21st century learning space, housed at the Harold Washington Library Center, created to connect young adults, books, media and institutions throughout the city in one dynamic space designed to inspire collaboration and creativity. By working both in teams and individually, young adults will have an opportunity to engage in projects that promote critical thinking, creativity and skill-building.

YOUmedia is an innovative, 21st century teen learning space which is currently located at five Chicago Public Library locations. YOUmedia was created to connect young adults, books, media, mentors, and institutions throughout the city of Chicago in one dynamic space designed to inspire collaboration and creativity.

High school and middle school age students, engaging with YOUmedia, can access thousands of books, laptops and desktop computers, and a variety of media creation tools and software, all of which allow them to stretch their imaginations and their digital media skills. By working both in teams and individually, students have an opportunity to engage in projects that promote critical thinking, creativity, and skill-building.”