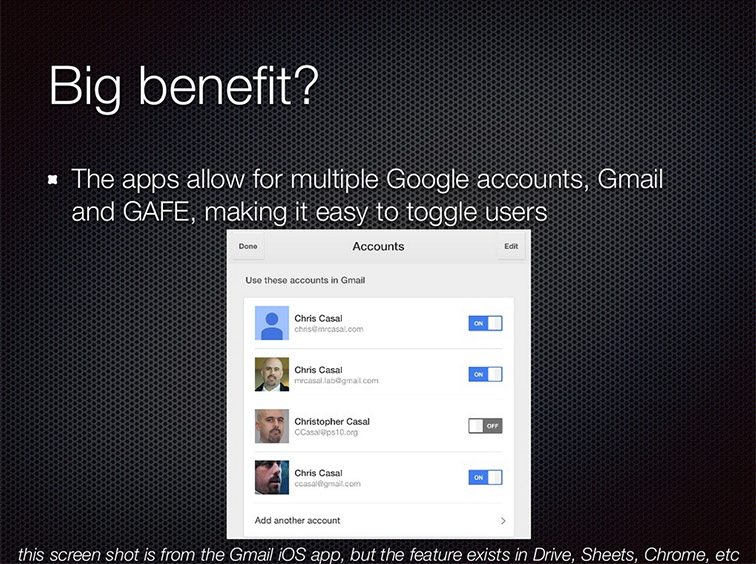 Maybe you love Google. You use Gmail, use YouTube like a television, and consider Google Search your second brain.

But while you like Google’s first-party Nexus devices and variety of second-party tablets from Samsung and others, there’s something about the iPad that draws you closer. The question then becomes a matter of utility and function. Or even manners.

We know they fight in the marketplace and in court. How do they–Google and Apple–play together on your iPad?

Pretty well it turns out, according to the following presentation from Chris Casal (you can follow him on twitter here), Technology Coordinator and teacher at P. S. 10 in Brooklyn, New York. Chris gives an excellent overview of the pros and cons of using Google apps to replace some of the native iOS software, from Chrome to Gmail, Google earth to Google Voice.

“An overview of Google’s iOS offerings with a focus on the core apps used in my daily instructional life. Apps like Drive, Chrome, Earth, Voice, and Translate are detailed and all other Google iOS apps are mentioned briefly. The archived presentation with full audio can be found here: http://community.simplek12.com/scripts/student/webinars/view.asp?id=1065”

Going Google: An Overview of Google’s iOS Apps – 081614 from Chris Casal; Going Google On iPad: What To Expect