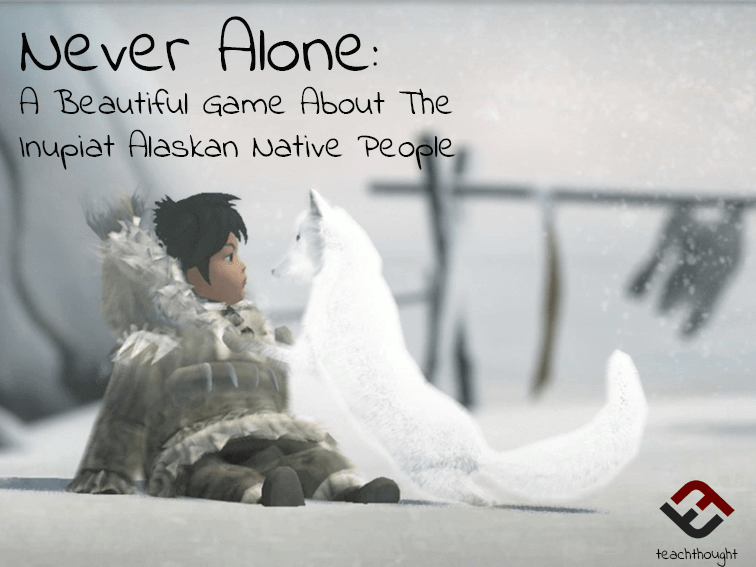 What is a video game?

This is an increasingly relevant questions as new hardware enables new software. Video games have traditionally been played on and through standalone systems–in arcades, or on home consoles from Sony, Microsoft, Nintendo, and other manufacturers that come and go (e.g., Sega, Atari, etc). Recent developments on the hardware side–namely mobile devices like phones and tablets, as well as more recent technology like Virtual Reality–have changed how games are played.

And that’s the case with Never Alone: Ki Edition, a game first distributed for the PC and consoles, and more recently ported to the aforementioned mobile devices (thus the “Ki” edition). Never Alone is a game that “shares, celebrates, and extends culture” by exploring the plight of the Iñupiat, an Alaskan Native people.

In the game, the player controls two characters–Nuna and Fox–as they search for the source of an eternal blizzard (symbolism, author’s position, and other English-Language Arts academic standards would apply here) that threatens their culture.

In their review of the game, Engadget explained that the game is ultimately about “Respect.”

“Respect for the Iñupiat, respect for nature and animals, respect for the things we can’t control, and respect for those who try to change their community for the better. Never Alone respects not only these ideas, but it holds video games in the same regard, as demonstrated by the care clearly put into the mechanics, story and flow of the game. Never Alone is a glimpse into the real lives of Alaska Natives, and it’s a peek at a different kind of fairy tale.”

Check it out if you think there’s a place for it in a lesson or unit. We could see it useful in grades 3-12 in English-Language Arts, Social Studies, and related content areas. You can download the game here (this may be an affiliate link–you can read more here).

Never Alone (Kisima Ingitchuna) is an atmospheric puzzle platformer developed in collaboration with the Iñupiat, an Alaska Native people, drawn from a traditional story that has been shared across the generations. Experience the epic journey of Nuna and Fox as they search for the source of an eternal blizzard that threatens the survival of everything they have ever known.

Guide both characters as you trek through frozen tundra, leap across treacherous ice floes, swim through underwater caverns and face enemies both strange and familiar.

On over 75 “Best of 2014” lists and winner of “Best Debut Game” at the 2015 BAFTA Games Awards as well as “Game of the Year” and “Most Significant Impact” at the 2015 Games for Change Awards, nearly 40 Alaska Native elders, storytellers and community members contributed to the making of Never Alone.

Reimagined for mobile — Never Alone: Ki Edition includes every level and all the excitement of the original game enjoyed by millions of PC and console players around the world. We’ve updated the game for mobile devices, adding brand-new touch controls, menus and hints along with optimized graphics and AI that bring the beauty of Never Alone’s ethereal, arctic environments to phones and tablets.

Play as both Nuna and Fox — switch between the two companions at any time as you rely on the unique skills of each character to succeed in your quest. Nuna can climb ladders and ropes, move heavy obstacles, and throw her bola at targets to solve puzzles. Fox can fit through small areas that Nuna can’t reach, scramble up walls, and jump to great heights.

Explore the harsh world of the Arctic — run under, through, and atop the unstable structures of an abandoned coastal village. Explore the eerily quiet treetops of a mysterious, frozen forest. Brave the fierce winds of the eternal blizzard. Only with the aid of Helping Spirits will Nuna and Fox have any chance of survival in a land where survival seems impossible.

Unlock fascinating video insights — Elders, storytellers, and other members of the Alaska Native community share stories and wisdom about their culture, values and the amazing Arctic world encountered by players in over 30 minutes of interviews.