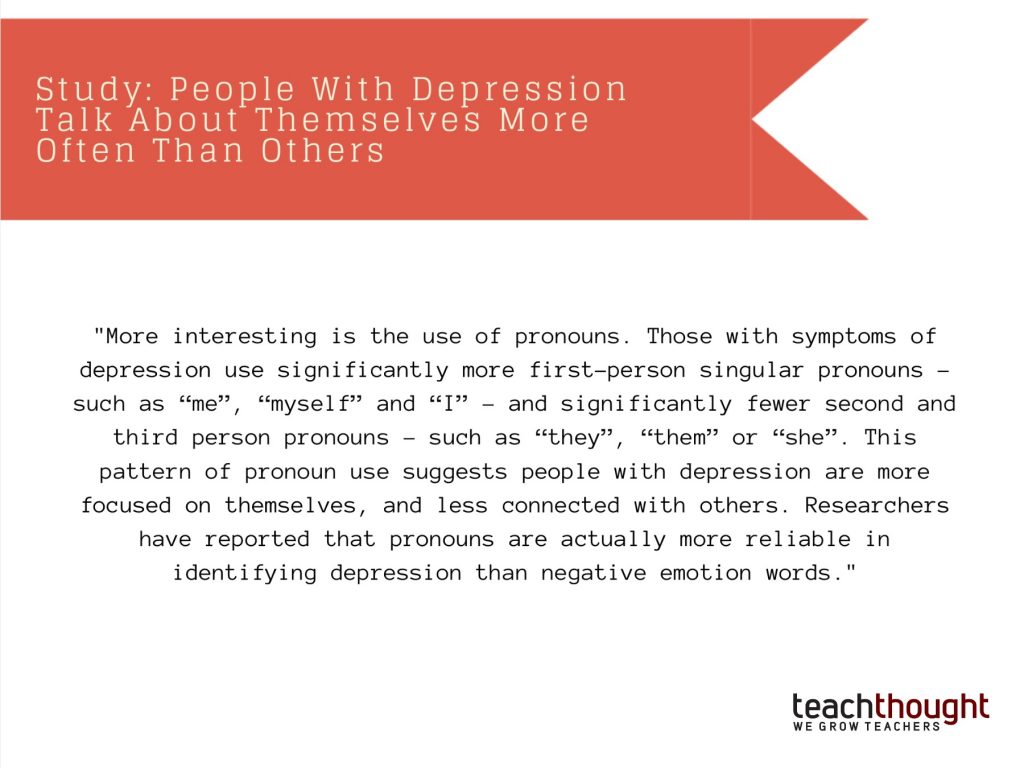 Study: People With Depression Talk About Themselves More Often Than Others

Mental health is everything.

While the argument is often made that it is stigmatized, a more precise label might be ‘wildly misunderstood.’ The ability of a human being to create and maintain a sense of well-being should be as primal as food, water, shelter from the elements, and safety from danger.

Somehow, though, things have gotten twisted. Whether through the spectacle of outlying and extremely rare mental illnesses such as schizophrenia, or misunderstanding definition of depression and anxiety, what it means to be ‘mentally healthy’ is about as well understood as the definition of a ‘good school’ or what it means to ‘think critically.’

I founded TeachThought seven years ago through a macro theme of social improvement. I didn’t grow up wanting to be a teacher, nor do I have a keen interest in education in and of itself. I’m interested in people–human potential, human suffering–even new definitions of what it means to be ‘human.’ This is why I occasionally write about these issues. Though they aren’t about education, education is about people–and that, as an ‘industry’ we often lose sight of this is one of our biggest areas for growth as professionals.

I read an article today about the relationship between language and depression. An excerpt appears below:

“More interesting is the use of pronouns. Those with symptoms of depression use significantly more first-person singular pronouns – such as “me”, “myself” and “I” – and significantly fewer second and third person pronouns – such as “they”, “them” or “she”. This pattern of pronoun use suggests people with depression are more focused on themselves, and less connected with others. Researchers have reported that pronouns are actually more reliable in identifying depression than negative emotion words.”

As a teacher, though, it overlaps greatly with concepts of human emotion–the difference between sympathy and empathy, for example.

Or why emotion is more important than understanding.

Or the source of all human suffering.

You can read the full article here.

Study: People With Depression Talk About Themselves More Often Than Others