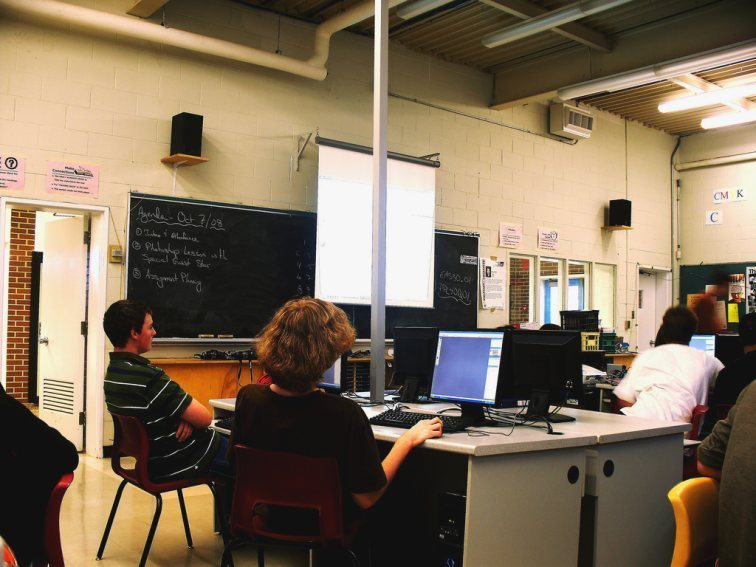 How To Fake A 21st Century Classroom

21st-century learning isn’t a trend as much as a reality.

With that kind of pressure—and constant district walk-throughs—it may be necessary for you to fake a 21st-century thinking and learning environment to make the right kind of impression with the right people, and give the appearance of forward-thinking.

Projects are what students do in the 21st-century. (This is distinctly different than project-based learning, mind you.)

One of the most powerful ways to employ a 21st-century learning tone and process is to start big–with broad, sweeping projects that change the world, and give students constant opportunity to revise thinking, innovate, design, publish, and curate because this is what modern students do, right? They publish and connect! So get connecting! Through projects!

Then use it to announce trivial things like due dates of 20th-century work. (No one will notice—you’re on twitter, and that’s all that matters.) And when you bring up a new idea in a data team meeting, tell them you heard it on twitter. #streetcred #nofilter #nomakeup #Iwokeuplikethis

And when students have trouble collaborating, tell them collaboration is a 21st-century skill, throw a calendar at them (or maybe just toss it on their desks casually) and tell them to get with the program. If that doesn’t work, find the closest map and pound your index finger on China and tell them everything’s about to get real in the next fifty years if they don’t wake up.

Video conferencing with classrooms in India—or even in surrounding counties—is a sure-fire example of a 21st-century classroom if there has even been one. Fire up the ol’ Mac, exchange awkward questions, smile a lot, and it’ll be over before you know it. No in-depth planning or technology integration necessary! Just conference! Bring on George Jetson!

Play Ken Robinson and Shift Happens videos every 6-8 weeks to keep students on their toes and increase the sense of urgency in your classroom. When parents ask what students learned at school, they’ll definitely remember the video, play it on their iPhone, and create an instant certainty in the mind of the parents that good stuff is happening in your classroom.

iPads support mobile learning, allow access to hundreds of incredible apps, and make children grin. If it’s a 21st century learning environment you’re looking for, a classroom full of students pinching and zooming on little glass rectangles will give it to you in spades.

And lots of them. Download more than you use, to the point that your iPad can’t even update the ones you actually use because there’s no room left. Try for at least a 10:1 ratio here of download-to-use rate.

The blog is the new novel. (I read that on a blog.) It gives students an instant audience with millions of potential readers, allows for constantly fluid text to be revisited and revised, and can be even be seen from outer space. Do it yesterday.


That just sounds all techy. I feel like I might melt into the matrix just typing it. The colon–that means one student per device. There’s no chance that the curriculum constraints, bandwidth problems, or backwards-thinking about learning models and instructional design in your state will mute the impact of 1:1. And even if it does, you might make the local newspaper because reporters don’t understand the difference anyway.

Go all Kitchen Aid on your curriculum and blend it until it’s unrecognizable from what you taught 3 years ago.

Create short YouTube videos, prime students with questions, and watch them all show up to class chomping at the bit to make magic happen. Ignore that many of the students who need the ‘flip’ lack either the access or the thinking habits to make use of it all.

10. Add a column for ‘Creativity’ on every rubric

Creativity is a 21st-century currency and the best way to make sure it happens is to give points for it. They’ll get with the program stat. Rubrics change lives–and administrators love them.

And administrators love 21st-century learning, too.