Which is an odd quantitative analysis, but does underscore that we’re past the point where “21st century” is an adequate label. These are odd times we live–and teach–in, the following 25 signs as proof that you’re teaching in 2015. 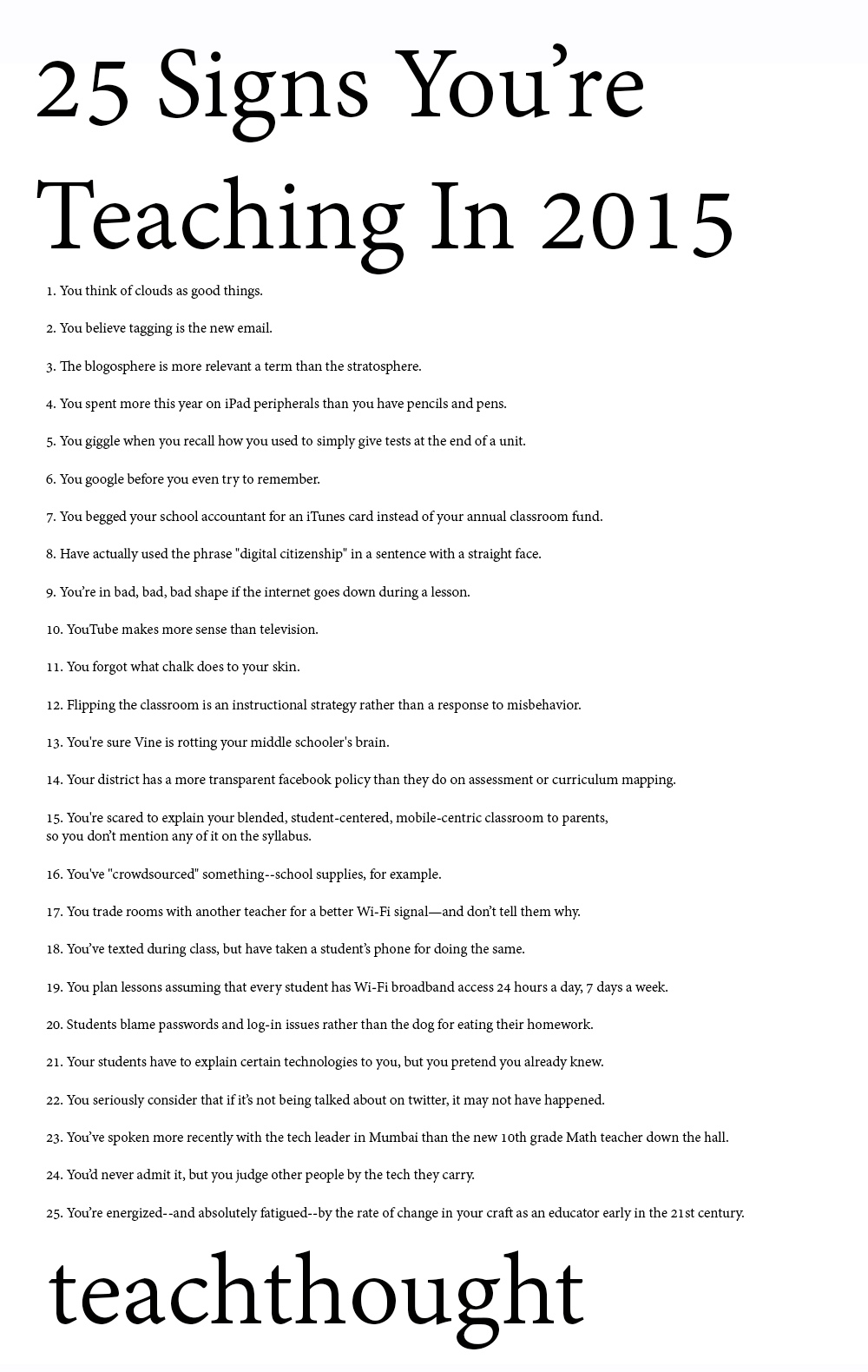 1. You think of clouds as good things.

2. You believe tagging is the new email.

3. The blogosphere is more relevant a term than the stratosphere.

4. You spent more this year on iPad peripherals than you have pencils and pens.

5. You giggle when you recall how you used to simply give tests at the end of a unit.

6. You google before you even try to remember.

7. You begged your school accountant for an iTunes card instead of your annual classroom fund.

8. Have actually used the phrase “digital citizenship” in a sentence with a straight face.

9. You’re in bad shape if the internet goes down during a lesson.

11. You forgot what chalk does to your skin.

12. Flipping the classroom is an instructional strategy rather than a response to misbehavior.

13. You’re sure Vine is rotting your middle schooler’s brain.

15. You’re scared to explain your blended, student-centered, mobile-centric classroom to parents, so you don’t mention any of it on the syllabus.

17. You trade rooms with another teacher for a better Wi-Fi signal—and don’t tell them why.

18. You’ve texted during class, but have taken a student’s phone for doing the same.

19. You plan lessons assuming that every student has Wi-Fi broadband access 24 hours a day, 7 days a week.

20. Students blame passwords and log-in issues rather than the dog for eating their homework.

21. Your students have to explain certain technologies to you, but you pretend you already knew.

22. You seriously consider that if it’s not being talked about on twitter, it may not have happened.

23. You’ve spoken more recently with the tech leader in Mumbai than the new 10th grade Math teacher down the hall.

24. You’d never admit it, but you judge other people by the tech they carry.

25. You’re energized–and absolutely fatigued–by the rate of change in your craft as an educator early in the 21st century.

The Impact Of A Teacher That Mentors