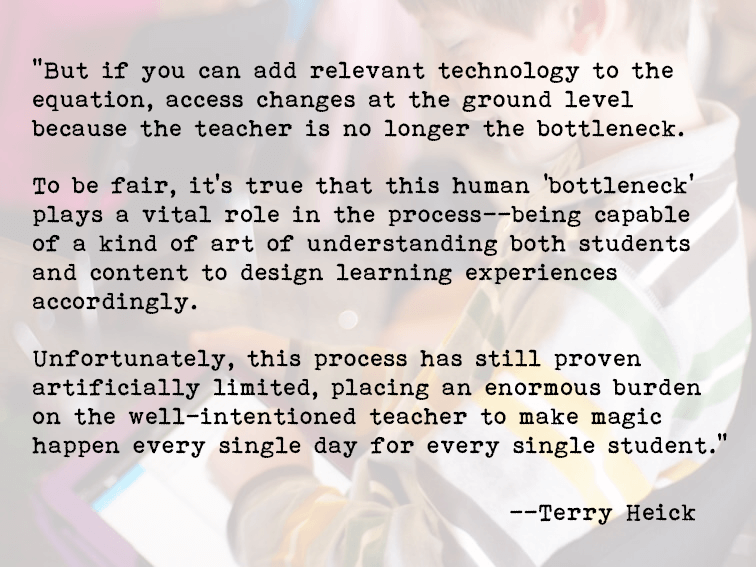 The Tech Effect: Deconstructing Education In A Gadget-Filled World

Here’s an analogy to help understand the potential of technology in learning. It’s a bit clumsy, but bear with me.

Think of a teacher like an employee at a department store. Using store guidelines and frameworks for merchandising, an employee will go back to the stock room and grab products and widgets to then place on the sales floor in some recognizable way that doesn’t take up too much space and is easy to shop.

What that employee chooses to put out on the floor depends on a variety of factors, among them what’s selling, what’s in stock, and what priorities managers have placed on specific items.

While an established process that’s “worked for years,” this model is limited as it is entirely governed by store policy, and the speed of a small handful of employees to stock. While fine in slower retail environments, in a busy store this system gets taxed very quickly. Missing sizes, incorrect pricing, low inventory on high-demand items, etc.

In this (labored) analogy, the teacher is the employee, surveying the sales floor, going back to the “stock room” of content, “grabbing” content (in the form of standards), then packaging these standards in a way that “shoppers” (i.e., students) can–and want to–use.

The students shop what the teachers put out.

But if you can add relevant technology to the equation, access changes at the ground level because the teacher is no longer the bottleneck.

To be fair, it’s true that this human ‘bottleneck’ plays a vital role in the process–being capable of a kind of art of understanding both students and content to design learning experiences accordingly. Unfortunately, this process has still proven artificially limited, placing an enormous burden on the well-intentioned teacher to make magic happen every single day for every single student.

(In fact, in response we’ve learned to silently accept much, much less than magic; teachers want proficiency, parents want good grades, and the goals of the students are entirely subverted either way if they are recognized and cultivated at all.)

The Impact Of Education Technology On Student Achievement: What The Most Current Research Has To Say is an overview of the impact of technology on education from 2012 from the Milken Exchange on Education Technology. While there was clear evidence of positive impact on ‘student achievement’ across the studies, there was a significant caution offered by the study’s summary which will sound familiar to readers: “There is, however, evidence in some of these studies that learning technology is less effective or ineffective when the learning objectives are unclear and the focus of technology use is diffuse.”

In a NY Times article from 2012, a neuroscientist made an interesting point.

“His own research shows what happens to attention and focus in mice when they undergo the equivalent of heavy digital stimulation. Students saturated by entertainment media, he said, were experiencing a “supernatural” stimulation that teachers might have to keep up with or simulate. The heavy technology use, Dr. Christakis said, “makes reality by comparison uninteresting.”

Put another way, the problem isn’t how effective is or is not, but in how closely it parallels the real world students live in.

But in lieu of seemingly positive data, the study is flawed from the beginning because it asks the wrong question. We continue to measure the ‘effectiveness’ of education is confounding ways. In What Works In Education And How Do We Know?, I speculated that, as it sits, it seems that “to be effective in education then means to promote proficiency of academic standards for the greatest number of students.”

What technology and all of its assorted gadgets does is provide a direct connection between the shoppers and the product–the students and the content. This means students are no longer shopping neatly organized end-cap displays full pre-packaged items, but rather the raw, unfiltered product. Stuff.

Of course this isn’t perfect, and presents new challenges for schools and districts, as well as thought leaders in education trying to understand how to best leverage all of the simultaneous possibilities: mobile learning, game-based learning, eLearning, blended learning, and project-based learning tools–and all wedged into classrooms, curriculum, and other pieces of the puzzle not necessarily built to accommodate them.

Textbooks were–for a while and as far as they were–successful because they allowed for “1:1” access of students to content, but that content was built around traditional genres of math, science, history, and literature, and with a dreadfully boring delivery system to boot (a 400 page book loaded with essay questions). Bad packaging.

Instead of a thousand books (on a thousand different topics) classrooms only needed one. But what’s more interesting, the way the Venturi effect literally lifts a 40 ton plane into the sky, or “science”?

The way viruses mutate in almost sentient ways to respond to their environment, or “biology”?

Emily Dickinson’s lifelong struggle to understand the will of God, or “Language Arts”?

The way minor disadvantages in access to resources can ensure a civilization’s ultimate collapse, or “History”?

So then maybe we need to go back to a thousand.

Or millions, because books, essays, poems, social media, and the internet itself aren’t packaged in “content areas” and if they are–for example an app designed to deliver pure standards-based math instruction–it probably isn’t significantly better than a good old-fashioned textbook coupled with a charismatic teacher. Which suggests we ask some questions:

What is the role then of “content areas”? Do they still make sense in the 21st century?

How does access to technology impact the way content–whether in traditional areas or not–is delivered?

Do modern digital content distribution models (like YouTube’s) suggest new ways of thinking about information and knowledge, and the difference between the two?

How does access to Google impact modern knowledge demands?

More broadly, how can we best package content in the 21st century in light of the tremendous access to content students have? And what is the role of the teacher as everything, moment by moment, continues to churn and change?

The less accurate and intelligent our collective response, the further formal ‘schooling’ will retreat into a shadowy irrelevance.