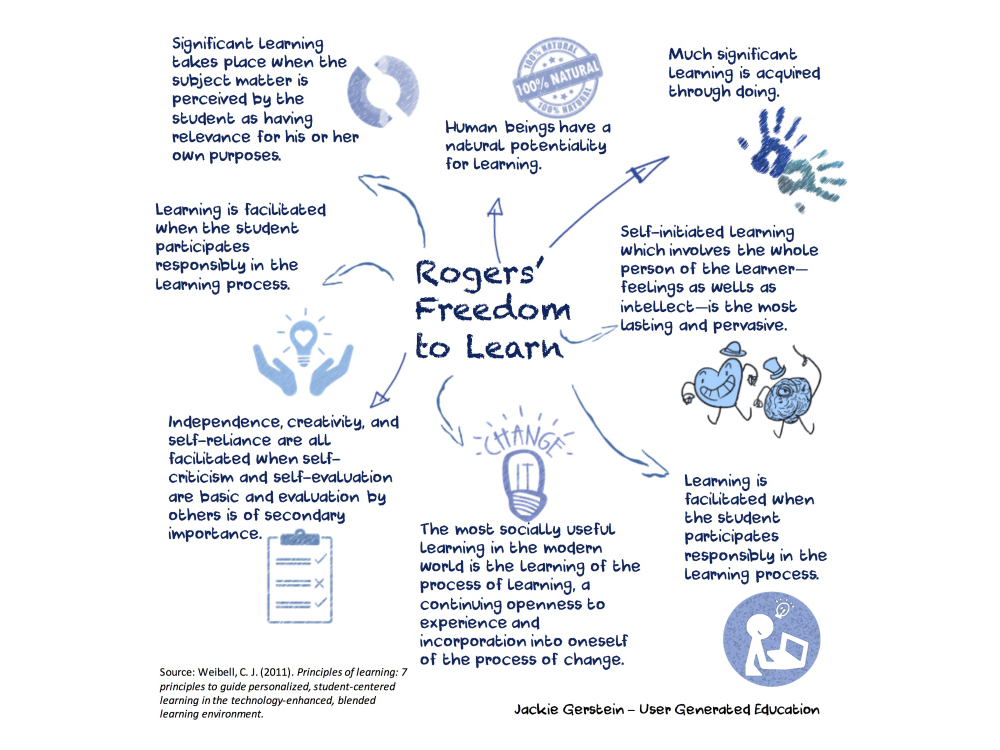 I was painfully bored during my K-12 education.

I looked forward to college anticipating that it would be different – more engaging, more interesting, more innovative. I was wrong. My undergraduate education, except for a few bright spots, was just an extension of my K-12 education including more grill and drill with sages on the stages (literally since I went to such a large university); taking notes and taking lots of multiple choice tests. During my freshman year, I thought that if I had one wish, it would be to change the educational system (which has stayed with me ever since).

One of those bright spots was being asked to read Carl Rogers, ‘Freedom to Learn’ which was published 1969 in an upper-level Educational Psychology course. The big aha for me was that school systems should be focused on helping learners develop the skills for how to learn not what to learn, one that was sorely lacking in most of my K-graduate-level education and a concept and goal that as an educator I’ve held onto ever since.

So now when I read about new ‘pedagogies’ and instructional strategies based on self-directed learning, learning how to learn, self-determined learning, I kind of laugh to myself. Solid, valid, and student-focused pedagogy has been proposed ever since the beginnings of institutionalized education – think John Dewey, Maria Montessori, Kurt Hahn, and in this case, Carl Rogers.

The following text provides a summary of Rogers’ major themes about learning and education from Freedom to Learn and comes from Weibell, C. J. (2011). Principles of learning: 7 principles to guide personalized, student-centered learning in the technology-enhanced, blended learning environment. (via principlesoflearning.wordpress.com)

As an example of significant learning—the kind that illustrates his theory of freedom to learn—Rogers cited the informal notes kept by Barbara J. Shiel, a teacher, who out of despair and frustration decided to try a drastic experiment in promoting experiential learning in her sixth-grade class. In the experiment, Mrs. Shiel introduced the concept of work contracts. These were ditto sheets that contained a list of all of the subjects the class was to study, along with a list of suggestions for study under each, and space for students to write their plans in each area.

“Because I was not free to discard the state-devised curriculum time schedule, I explained the weekly time-subject blocks to the children—this was to be a consideration in their planning. We also discussed sequential learning, especially in math, mastering a skill before proceeding to the next level of learning. They discovered the text provided an introduction to a skill, demonstrated the skill, and provided exercises to master it and tests to check achievement. When they felt they were ready to go on, they were free to do so. They set their own pace, began at their own level, and went as far as they were able or self-motivated to go.” (Rogers, 1969, pp. 17-18)

Since evaluation was self-initiated and respected by the teacher, there was no need for cheating to achieve success. “We discovered that “failure” is only a word, that there is a difference between “failure” and making a mistake, and that mistakes are a part of the learning process.” (Rogers, 1969, p. 18)

One cannot measure the difference in attitude, the increased interest, the growing pride in self-improvement, but one is aware that they exist. (Rogers, 1969, p. 19)

The experience of Mrs. Shiel’s experiment is illustrative of the principles of learning that Rogers (1969, pp. 157-164) abstracted from his own experience:

Human beings have a natural potentiality for learning. “They are curious about their world, until and unless this curiosity is blunted by their experience in our educational system” (p. 157).

Significant learning takes place when the subject matter is perceived by the student as having relevance for his or her own purposes. “A somewhat more formal way of stating this is that a person learns significantly only those things which he perceives as being involved in the maintenance of or the enhancement of his own self” (p. 158).

When a threat to the self is low, the experience can be perceived in differentiated fashion and learning can proceed. When [the learner] is in an environment in which he is assured of personal security and when he becomes convinced that there is no threat to his ego, he is once more free to…move forward in the process of learning. (p. 161)

Much significant learning is acquired through doing. “Placing the student in the direct experiential confrontation with practical problems, social problems, ethical and philosophical problems, personal issues, and research problems, is one of the most effective modes of promoting learning” (p. 162).

Learning is facilitated when the student participates responsibly in the learning process. “When he chooses his own directions, helps to discover his own learning resources, formulates his own problems, decides his own course of action, lives with the consequences of these choices, then significant learning is maximized” (p. 162).

Self-initiated learning which involves the whole person of the learner—feelings as wells as intellect—is the most lasting and pervasive. This is not the learning which takes place “only from the neck up.” It is a “gut level” type of learning which is profound and pervasive. It can also occur in the tentative discovery of a new self-generated idea or in the learning of a difficult skill, or in the act of artistic creation—a painting, a poem, a sculpture. It is the whole person who “lets himself go” in these creative learnings. An important element in these situations is that the learner knows it is his own learning and thus can hold to it or relinquish it in the face of a more profound learning without having to turn to some authority for corroboration of his judgment. (pp. 162-163)

Independence, creativity, and self-reliance are all facilitated when self-criticism and self-evaluation are basic and evaluation by others is of secondary importance. If a child is to grow up to be independent and self-reliant he must be given opportunities at an early age not only to make his own judgments and his own mistakes but to evaluate the consequences of these judgments and choices. (p. 163).

The most socially useful learning in the modern world is the learning of the process of learning, a continuing openness to experience and incorporation into oneself of the process of change. If our present culture survives, it will be because we have been able to develop individuals for whom change is the central fact of life and who have been able to live comfortably with this central fact. They will instead have the comfortable expectation that it will be continuously necessary to incorporate new and challenging learnings about ever-changing situations. (pp. 163-164)

Rogers’ theory of learning also included principles that define the role of the teacher as a facilitator of learning. Rogers (1983) summarized this role by stating that “the primary task of the teacher is to permit the student to learn, to feed his or her own curiosity” (p. 18). Rogers’ principles of facilitation are complementary to his ten principles of learning. Together they form a human learning theory that emphasizes learner agency, growth, and effect. These ten principles are as follows (summarized from Rogers, 1969, pp. 164-166)):

(For this final section, I took the liberty to change “facilitator” to “educator.”)

The following graphic developed by the Freedom to Learn Project, is based on Rogers’ ideas and exemplifies their manifesto.

So the push towards self-directed learning – helping learners develop skills for directing their own learning really isn’t new BUT the Internet, social media, and open-source content just make it easier for the educator actually implement these practices especially when working with groups of students.

Online learning opportunities, pedagogical shifts and easy accessibility of the Internet through multiple devices offer attractive opportunities for learners to assume greater responsibility and initiative in their own learning.

In fact, it may not be hyperbole to state that self-directed learning is now a mandatory skill rather than optional in order to impart both work readiness and the development of global citizenry (diversified, culturally sensitive and fully contributing social citizens) among the growing generation of digital [savvy learners].

30 Storytelling Tips For Teachers: How To Capture Your Students’ Attention