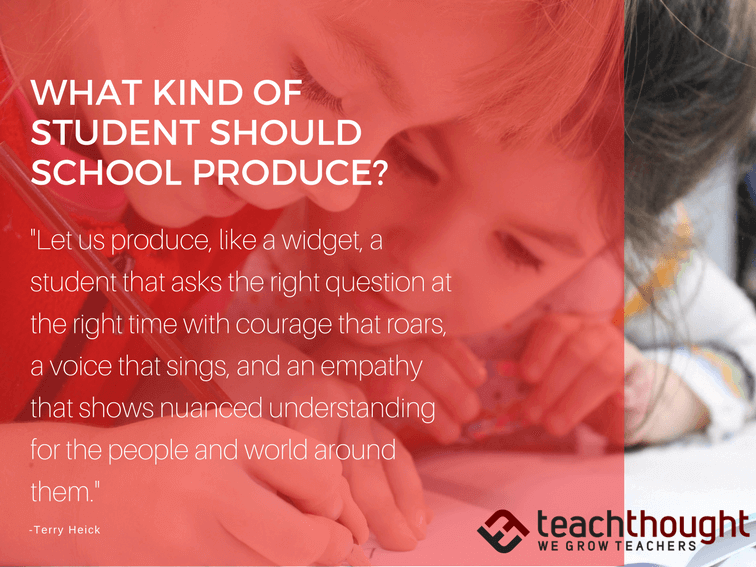 What Kind Of Student Should Schools Produce?

What kind of student should school produce?

That’s a big question. Let’s backup and look at the recent collision of science and government in the United States as a kind of context.

Slate recently published an article about what happens when scientists try to be their own PR machine.

It seems many scientists would take matters into their own hands by learning how to better communicate their subject to the masses. I’ve taught science communication at Columbia University and New York University, and I’ve run an international network of workshops for scientists and writers for nearly a decade. I’ve always had a handful of intrepid graduate students, but now, fueled by the Trump administration’s Etch A Sketch relationship to facts, record numbers of scientists are setting aside the pipette for the pen. Across the country, science communication and advocacy groups report upticks in interest. Many scientists hope that by doing a better job of explaining science, they can move the needle toward scientific consensus on politically charged issues. As recent studies from Michigan State University found, scientists’ top reason for engaging the public is to inform and defend science from misinformation.

It’s an admirable goal, but almost certainly destined to fail. This is because the way most scientists think about science communication—that just explaining the real science better will help—is plain wrong. In fact, it’s so wrong that it may have the opposite effect of what they’re trying to achieve.

This is a fantastic point is similar in (dys)function to the long-term effects of industry-specific jargon, a concept I wondered about in “Why Parents Don’t Know How To Help“:

“Teachers don’t ‘give tests,’ they ‘assess.’ They don’t ‘go over it again,’ they ‘review,’ then ‘remediate.’A challenge, though, comes after generations of this kind of jargon casually but persistently accruing in and around classrooms and schools. Teachers end up (ideally) designing diverse assessment forms in pursuit of personalized learning by using adaptive learning technology—just as they are asked to do by peers and the public.

A challenge, though, comes after generations of this kind of jargon casually but persistently accruing in and around classrooms and schools. Teachers end up (ideally) designing diverse assessment forms in pursuit of personalized learning by using adaptive learning technology—just as they are asked to do by peers and edu-media everywhere. Which of course makes no sense to anyone but other teachers.”

Communication has failed–and that means understanding has, too.

The end result in both cases is a kind of miscommunication, which can also be called misleading.

In “A New Definition For Equity In Education,” I wrote,

“Parents speak in the language of terms and compliance because that’s how we speak to them.

They understand grades, behavior, some of the fundamentals of literacy, and other abstractions like effort, inspiration, success, and failure. But understanding? The utility of content? Personalized learning? How project-based learning works? The purpose of school?

What if they understood how people learn even half as well as most teachers? What if they understood the pros and cons of certain assessment forms (this isn’t rocket science), the inherent limitations of letter grades (there’s no way they don’t already have an instinct for this), or how to coach critical thinking and observation on a daily basis? At least how to help students repackage and transfer knowledge from academic settings to the world they live in.”

The misleading and lack of leadership here isn’t intra-education–that is, is not within education and for educators amongst one another–but rather between education and the communities, families, and children it serves. This is a matter of language, but also a matter of design. One cannot exist without the other.

It’s also well-intentioned but reckless mis-leadership of families and communities by an industry trying so hard that it can no longer recognize itself.

In 2014, I wrote Why All Ed Reform Fails (actually wrote it in 2012, then updated and republished two years later), I wrote:

‘…this shift is towards industrialized (and mostly standardized) buildings full of over-worked teachers delivering non-authentic (and entirely standardized) curriculum whose success is measured by standardized testing. Even the best school…de-centralizes learning, intellectual authority, and the opportunity for cultural and spiritual guidance that can only occur in local circumstances…Learning starts with self-awareness, affectionate knowledge of “other,” and practice reaching for that which is just out of reach.

This can be supported in schools, but not birthed. Learning necessitates a kind of “intellectual life” that is grown in an intimacy available only at home, in neighborhoods and other communities where “self” and “other” are carefully known. Here, even digital environments are available. A “community” is any place where the learner is intimately known, and seeks to know “other” with similar intimacy–whether that “other” is a person, an issue, or both. The enormous effort of learning reform is Sisyphean in both repetition and scale because the challenge itself overwhelms through repetition and scale. Repeatedly we train our sights on the wrong targets, looking to improve curriculum, assessment, and schools through plans, policy, and standards.

Plans, policy, and standards have no knowledge of the intimate—or the learner. They are lifeless conjurings from well-intended institutions applying standardized and corporate spirit to that which is decidedly non-corporate.’

Standardization Is A Process

Standardization is first a concept, then a strategy, then an effect. As it stands–in our language and in our rhythms and in our effects, and in seeking to communicate to those we serve as educators–standardization has not had the desired effect.

Worse, what it has communicated is a message of hands-off, industrialized academia that reads and feels like legalese. We’ve never fully progressed past the first stage of standardization; we’re stuck with it as a concept that looks like a strategy of blind buckshot.

As for the effect? Through a focus on academic content, with the language patterns and phrasing of corporate planning and agency, and a disenfranchised ‘client set’ that has no idea what we’re doing or how we’re failing, standardization has dehumanized the one thing in the world that shouldn’t be–the growth of a human mind.

By all means, let’s standardize. Ask, ‘What kind of adult do we hope the child becomes?’, then work backward from that.

Let’s not ask what the child can do, but tends to do.

Let’s make sure the student can read and write–and wants to.

Let’s see that the student can think critically–then does.

But even reading and writing and thinking are only strategies for good living and good work; they lead to affection and compassion, which both can feed the desire to read more fervently and write more creatively and think more carefully.

Affection and curiosity mean everything, so let us begin our standardization there. Let us produce, like a widget, a student that asks the right question at the right time with courage that roars, a voice that sings, and an empathy that shows nuanced understanding for the people and world around them.

One whose behavior takes into account its own delicate interdependence with living and non-living things.

A student that finds contentment in the ongoing union of their own mind and subsequent behavior as the moments of their life unfold.