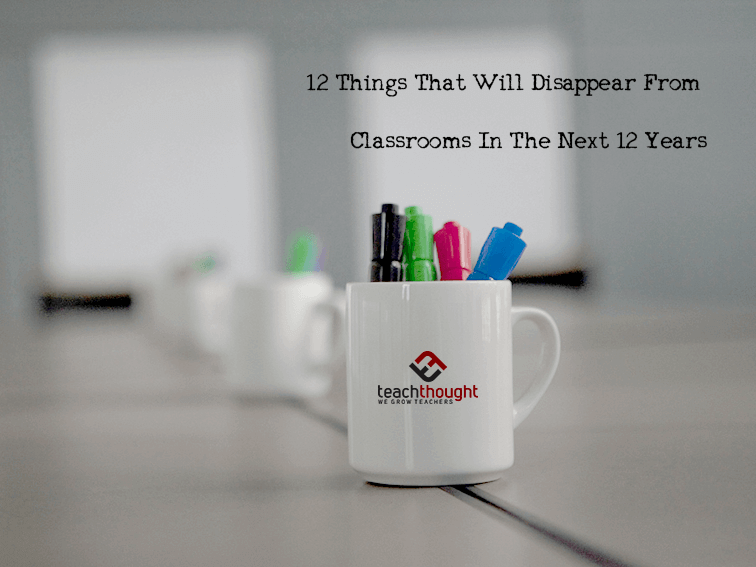 [Author’s note: Updated for broken links and typos; I didn’t change any of these even though I badly wanted to because that’s kind of like cheating, isn’t it? -TH)

That may not be as true as we’d like it to be–the pace of the change in education lags awkwardly behind what we see in the consumer markets. It could be argued that there’s been more innovation in churches and taxis than there’s been in libraries and schools, which is a special kind of crazy, but logical: ‘fields’ that are dependent on consumer habits are far more vulnerable to disruption. Education, being more or less perma-funded by governments and misunderstood by the public, is more built to resist change.

But that doesn’t mean change isn’t happening (e.g., flipped classrooms, BYOD, maker movement), and that more isn’t on the way. So below I’ve collected a list of those ‘things’ most likely to see disappear from the classroom over the next 12 years, with technology, and technology-based thinking being the catalysts for change. 12 years isn’t really very long, but the pace of change isn’t linear. The difference between twelve years ago and today will likely be surpassed by today and twelve years from now.

In what universe does standing up in front of 30 people to ‘teach’ something make any sense? Are they all learning the same thing? Who thinks that is a good idea? Are they all ready for the same content in the same way? Is their genius going to shine through that whole-class instruction, or is that simply the easiest way to express stuff. To ‘cover’ it. (You might hear yourself say: “We went over this last week. You should remember.”)

Personalized learning and whole-class instruction are enemies. This change has been long over-due. Technology isn’t even necessary for this.

Of all the ‘movements’ in education recently, the get-rid-of-the-letter-grade seems to be both the least ambitious and most-likely-to-succeed. And the merits of getting rid of letter grades altogether seem clear: By removing the iconic carrot stick, the whole climate of learning has a chance to change.

In the meantime, grade backwards form zero if you have to, and consider these alternatives to letter grades if you’re ready to make some real noise in your district. (Remember, the last two districts I worked in wanted me gone. Proceed with caution.)

Tests, as we know them, will likely disappear within the next twelve years. That’s not to say that assessments won’t exist. Formal education has always been dominated by outcomes and outcomes are measured by assessments. Little of this will change in the next twelve years. But what can (and likely will change is the current form, structure, and duration of standardized tests. There are many ways to measure understanding. Let’s start there.

Not sure how technology is going to work this one out, especially in a classroom, but QR codes and the cloud and facial recognition are all examples of new thinking.

One-size-fits all instruction makes about as much sense as one size fits all schedules. Or having X number of classes for Y number of minutes. New interactions = new thinking.

20 years from now, computer labs may be replaced by Maker Labs and classrooms will become more like Google Rooms/computer labs. (See: 20 Classroom Setups That Promote Thinking.) For now, the idea of one or two rooms full of computers is slowly being replaced by laptop carts and Google Chromebooks.

Clearly, millennials and generation Z think differently about gender than boomers and generation X, but it’s less clear how that change ‘sticks’ as they begin having families and switching jobs and dealing–as a culture–with social change, increasing globalization, and so on. It may be a bit premature to say gender labels will outright disappear, for example–or that ‘people will become color-blind to race’–but some kind of change seems to be happening.

Knowledge and information are being increasingly organized in new ways. Organic search, social referrals, blogs, RSS-based ‘digital magazines’ like Feedly, apps like Flipgrid), and other technologies are becoming the new normal for content organization. Books (still seem to be) by far the standard for organizing ideas, but as even what we think of as a ‘book’ changes, new forms for how we organize content will likely emerge as well.

Us: How about an uncommon curriculum with uncommon standards?

Us: There has to be a better way.

Them: There is no better way.

As long as the teacher is the front of the room–or the center–content is secondary and students are, too. Technology allows students to directly interact with ‘filtered’ (e.g., textbooks and handpicked essays and librarian-selected picture books) and ‘unfiltered’ content (e.g., YouTube, Google, etc.) social networks, peer groups, digital archives of their own work, experts in the community, mentors, and more.

And as the daily interactions students have shifted from teachers and ‘elbow partners’ to the world itself, rows of desks no longer do the trick.

These may already be disappearing in your school. ‘Good riddance’ I say, but sometimes I wonder if things weren’t easier to find in filing cabinets than on Evernote.

This one should’ve placed higher. Textbooks really aren’t the evil they’re portrayed to be–they’re compilations of content that students need to master from a skills and basic knowledge perspective. The problem is that schools for too long have pursued skills and basic knowledge, and one-size-fits-all books–like whole-class instruction–are the opposite of the critical-thinking based and personalized learning environment students need to thrive.

12 Things That Will Disappear From Classrooms In The Next 12 Years; image attribution flickr user poptech.